The temptation of Saint Agnostic 2: Isabella

See Part 1 here for the rationale. Basically these profiles are to show how I didn't start off liking teenagers -- I hadn't been around them since I was in high school -- but how they slowly won me over with their charms. They're also to show how it was they who came on to me, contrary to the popular image of a guy-who-likes-young-ones as a slimeball who imposes himself on unwilling girls.

All names have been changed. I thought of at least keeping their ethnicity clear (there are far more Persians and White Colombians than expected by chance), but I opted for generic trendy names.

Isabella was one of only two 14 year-olds who I've ever found myself drawn to, although she was nearly 15 by the end of our acquaintanceship. (I was 24 - 25.) Typically, 14 is too immature, 15 is a transition year, and by 16 or 17, they're ready to begin dating. However, these are just trends -- maybe only 1 out of 1000 or 10,000 girls her age have matured early enough in looks and personality to get my attention, but it's not zero. And even with the precocious ones, I have almost no sexual attraction to them (although for 16 - 19 year-olds, I do for sure). Only holding and kissing or something like that. But just because you don't want to sleep with them doesn't mean they can't tug at your emotions, the crafty little devils.

I first met Isabella when she was 13. She was very hyperactive, and at that age her idea of flirting was to hop out of her seat to run over and bug me. I didn't pay her any attention, though -- I mean, 13. One year makes a big difference when growth is exponential, though, so by the middle of her freshman year of high school, she actually made an impression. By this time, her parents had her medicated for ADHD, turning her from ebullient to brooding overnight. When I worked with her for the first time after summer vacation, I thought it was some older, darker sister of hers.

She always looked at me with longing puppy-dog eyes, and I felt horrible for being powerless to restore her mood to a normal level. I would try to brighten her mood and get her into work mode by telling a joke, or whatever, and for a few moments anyway, that would wash off the long face and elicit a smiling expression like when a cat's getting its chin scratched.

When I stood near her to quickly correct her work or write down her score, she would spontaneously stand up from her seat, lean slightly forward onto the desk, and push out her little butt, always in then-fashionable low-rise jeans, all while tilting her head into my personal space and letting her long hair fall down to one side.

One day, when I wasn't even close to her, I saw her staring at me from the corner of my eye. "Hey Agnostic...? Can I ask you a question...?" I turned my head toward her over my shoulder. "What color are your eyes?" I don't know, brown I guess. "That's what I thought, but like, they kinda change color depending on the light you're in." Awkward pause. "They're cool... it's like, exotic..."

I never looked at high schoolers the same way after one of them complimented me on my exotic eyes that she'd been tracking through different lighting conditions. And this in front of a group of her peers, no less! She definitely had a rebellious, trouble-making streak, so it shouldn't have been too surprising -- but still.

Isabella was a very observant girl: it turns out my eyes have a ring of green around a central ring of hazel, and that they do change depending on how strong the lighting is. (The pupil constricts in strong light, making the iris bigger and revealing more of the outer green.)

She didn't come back after her freshman year, and that was probably for the better. To ignore their advances, it helps if they appear immature. But it's tough when they're always volunteering unique observations like she did, trying to remind you that they're one of the precocious ones who won't be ignored. 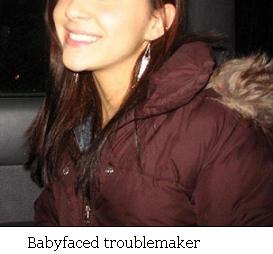