Even bread types are subject to fashion

One of the most interesting aspects of our modern world is that the elites wage their war for status on just about any field you can think of. No longer are clothes the main status signal: even your choice of peanut butter -- or almond butter, as the case may be -- says something about you, whether you like it or not.

I always knew that some foods offered status-boosting exotic points, but it wasn't until last year that I noticed that exotic foods themselves can cycle in popularity. For example, I recall Greek food being really popular in the late 1990s, especially Greek salad dressing replacing Italian. But Whole Foods now hides its feta in the farthest back area of the cheese counter, like an embarrassing Limp Bizkit tattoo it got in 1998. This loss of sexiness is not because Greek food has become so common that we don't view it as novel anymore -- it is simply no longer as common as it used to be.

Again judging by the Whole Foods cheese counter, today the country to exotify is Spain -- which I love because it allows me to say, "I lived there before it became really mainstream," or "Yeah, this pa amb tomaquet is pretty good, but it's just not the same without authentic Spanish tomatoes. I know, I'm spoiled." Nothing shuts up a whiterperson faster than that kind of talk.

Now for many, the only decision regarding bread is "plain white or whole wheat?" But for the well-to-do, displaying the wrong kind of bread in the pantry would be social suicide.

"Oh, you only have focaccia? No, there's nothing wrong with it, it's just that... well, what haven't we done with it already? Remind me next time, and I'll bring over some ciabatta. It's much better."

Not being a foodie, I don't have an intuitive feel for fashion in bread types, but let's see if we can detect some changing tastes for three breads, consulting the NYT: 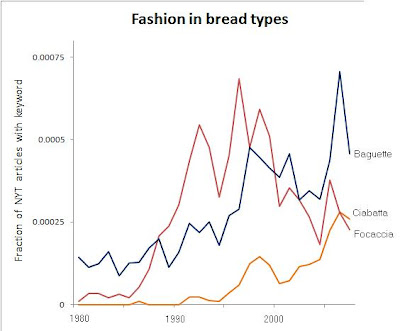 The numbers are small in all cases, because the newspaper of record has better things to cover than bread. Still, we see a pretty steady increase in the popularity of baguettes and ciabatta, and a nearly completed fashion cycle for focaccia, which rose around 1987, peaked in 1997, and has been declining since. I wouldn't make too much of the apparent downswings for 2008: they are estimates based on the year so far, and there may be a surge for Thanksgiving and Christmas. And again, the absolute number of articles featuring bread is always small, so small random year-to-year fluctuations will make the fractions jump around more.

Personally, I hope to craze for Spanish food strikes the bakeries so I can get some good pa montanyes ("mountain bread"), like I used to get in Barcelona. Ah, and if you think I left the phrase "artisanal" out of my search -- I've included it in a very graph-packed post for GNXP.com on when white people started liking stuff white people like. It should be up sometime soon.