A news article I read about the new James Bond movie, Quantum of Solace, mentioned the age of the lead actress as 29. The character is supposed to be a modern Power Bitch, who Bond doesn't even get to fuck. So naturally I thought her age was part of the switch -- surely during the sexual revolution, they had sex kittens star as Bond girls, and only when they make them feminist role models do they choose older actresses. Right? After all, that is the pattern for beauty pageant winners and Playboy Playmates.

Here is the graph of the average age of the Bond girls in each year that a movie came out *: 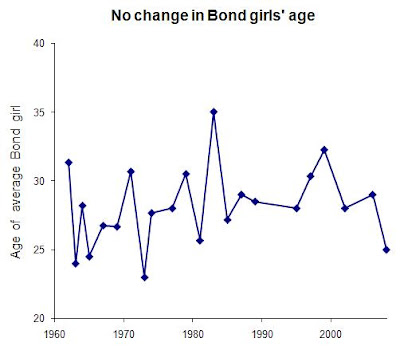 The movie with the youngest girls is Live and Let Die, while the oldest women star in Octopussy. Not having seen most of these movies, I was quite surprised not only that there's no clear trend or cycle, but that the average is so high -- across all movies, the average Bond girl is 28. Pussy Galore was played by a 39 year-old Honor Blackman -- that's gross. All Bond girls should have fertile rather than barren bellies.

And here is a frequency distribution of the Bond girls' ages: 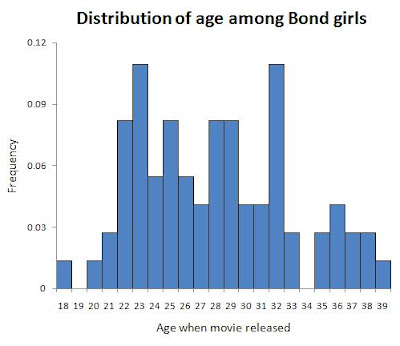 I don't want to hear any of this, "Well, she should be closer to his age" nonsense. Like any of the rest of the plot is very realistic. Plus it's not like they're getting married -- it's always a fling. Jesus, he's an international spy with a license to kill. If Bill Clinton gets a wide-eyed early-20s girl -- cow though she was -- then certainly James Bond gets one too. Send the older ones back to headquarters to loosen up that frigid boss M.

* Some of the actresses who played minor roles weren't famous enough for people to look up their birthdate, but each year has at least two and usually three or more ages going into the average.