Schoolgirls should not wear schoolgirl costumes

Halloween costumes that are specific human types are always caricatures, for two reasons: 1) to make sure everyone gets the point, and 2) usually to poke fun at the type (say, when someone dresses up as a nerd or banker). The past two nights at the teen dance club, I saw quite a few dressed up as schoolgirls, and like heavy make-up on beautiful girls, the costume detracted from their overall charm. Here's an example of the costume I mean, compared to what a real schoolgirl wears: 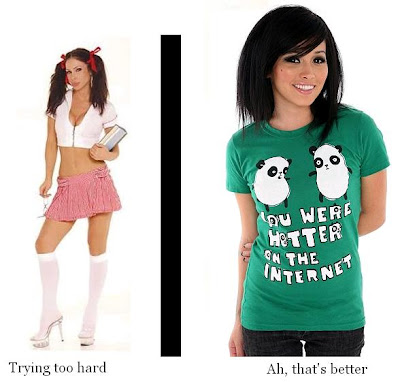 Just as whips and chains are only for couples whose libidos so low that they need a shot in the arm of kinkiness, schoolgirl costumes only serve women who've already lost their youth. As much as they will deny it for the rest of the year, when Halloween comes around, most women recognize that they looked better in high school than they do now. They see women their age dressing up as schoolgirls, but zero schoolgirls or college girls dressing up as CEOs, lawyers, housewives, or any other generic adult type. That asymmetry is too stark to block out of their mind, though fortunately for their egos, they are only confronted with the cold hard truth once a year.

The same is true for all the other costumes older women sport to try to regain their youthfulness for one night: nurses, French maids, etc. etc. etc. As on prom night, they look like older women trying to look young. Baby girl, you haven't even lost it yet, not even close!

The only really good costume I saw was a dark / fallen angel: something like this, only the girl was probably a senior in high school, 5'3, barely over 100 lbs, and had Crow make-up around her large girly eyes (though without white paint on the rest of her face). Seeing her was like getting slapped in the face with one of those snaps that no father wants to hear: "Dad, I'm not stupid and innocent anymore -- you have to let me grow up!" I mean, the girls at this club like to ride my leg as we get low together -- I know their minds have already transformed into hormone sponges. Still, she was such a girly looking girl that the contrast with her costume was a bit jarring.