The rise of "undocumented" as a euphemism

I have a really long-running simulation going, and so to kill some time I thought I'd look at how the use of "undocumented" to describe illegal immigrants has changed over time. Here is a graph: 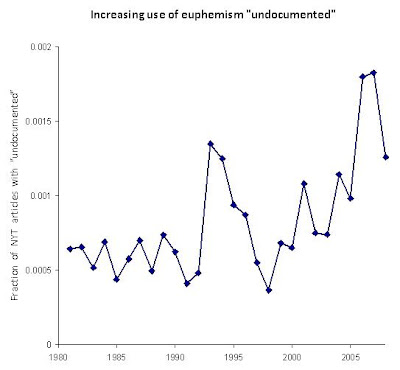 There is no trend from 1981 to 1992, despite the fact that amnesty was given to illegal immigrants in 1987. Searching 1987 for "amnest illegal" shows 147 articles (more than "undocumented" for most years), but they tended to refer to "illegal aliens" rather than "undocumented" people. There's a spike in the mid-1990s, although browsing through the headlines, it doesn't seem like there was a particular high-profile incident that caused this -- not a surge of articles about the effects of NAFTA, for example. Just a lot of articles about health care for the undocumented, and other assorted concerns. Even by 2000, it was no more commonly used than 20 years before.

Starting in the 2000s, though, there is a clear upward trend, as the ruling class tries to pull the wool over our eyes with euphemistic language -- I mean, if they're undocumented, why then we've simply got to give them documents, on analogy with giving shelter to the homeless!

The only benefit I've ever received from massive immigration from Central America was my first girlfriend, back in 6th grade. I'm sure she wasn't illegal, but her parents may well have been -- a lot of Salvadoreans fled the US-supported death squads in the 1980s, many ending up in the DC metro area. She was the shapeliest girl in the entire middle school, surpassing most high schoolers too.

I still remember the shocked expressions and high fives I got in music class when my classmates heard who I was dating. She was pretty aggressive, asking me out, and ambushing me for our first kiss, although I was more aggressive once the kissing actually began. I'll never forget how much she melted down on the phone when she asked if I didn't love her anymore, and I flatly and nonchalantly said "not really." Hey, I was only 12 and stupidly thought honesty was the best policy.

So, if we alter the immigration laws to only let in voluptuous bronze-skinned females who will initiate our boys into the world of dating, I'm all for it.