Well, that interlude of Catalan girls was refreshing, but now it's back to the quant grindstone. In Monday's post on the relationship between IQ and interest in sports, I showed that hunting and fishing, as well as going to auto races, decline as you look at smarter people. Although I looked only at whites, I didn't separate them by region. A commenter said this:

But in my experience, this is a lot more of a regional thing. A smart guy in Kansas or Wyoming is a lot more likely to hunt than a dumb guy in New York City.

Another commenter said this in a related post by Audacious Epigone:

You have made a critical error in your analysis. Alaska is a special case. Hunting is more of an integral activity for Alaskan kids and adults. It's the low IQ Alaskans who don't hunt.

They are both wrong.

The GSS doesn't allow us to look state-by-state, but it does allow us to look at regions. Obviously the commenters above are talking about the red state / blue state divide, so I lumped regions into red and blue categories. They aren't perfect, but they're pretty close. * In the end, I don't care how closely they match up with a "voted for Bush" map, since that's not the point -- the point is to carve the country up into NASCAR and Starbucks states, which is what I'm calling red and blue.

[Update] The original graphs I posted below are for HUNTFISH and AUTORACE. However, the question HUNT, which asks if you go hunting, has been asked for much longer, and so has a much larger sample size, allowing me to look at the full spectrum of IQ scores. The data are from white respondents only. Here is a graph showing that as you look at smarter people, in either red or blue states, hunting declines in popularity: 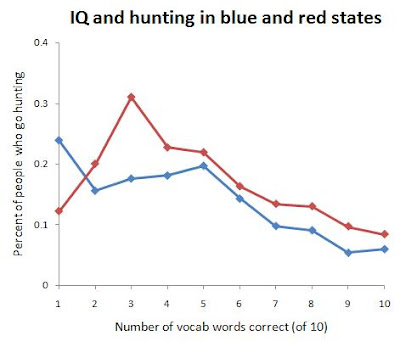 The red-state line is almost always above the blue-state one, validating my choice of which regions are red and blue. In both regions, hunting is most popular with those of average or below-average intelligence. As you move up the above-average group, they are increasingly less likely to go hunting. The only differences between red and blue states are that red-staters of above-average IQ are at most a whopping 5% more likely to hunt than their blue state counterparts, and that dumb red staters are even more likely to go hunting than dumb blue staters. As I say below, the upper end of red-staters are LESS likely to hunt than the lower end of blue-staters. [End of update]

So here is a follow-up, still looking only at whites, but now comparing patterns in red vs. blue states. I only counted IQ groups that had about 40 individuals or more (for red states, the 4 and 9 groups had 38 and 36 people, but I counted that as close enough, just to get comparable groups). 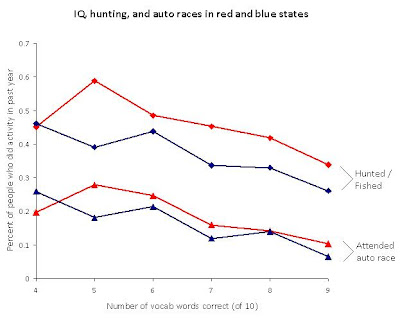 In red states, the pattern is only slightly different -- interest in these low-class activities doesn't strictly decline with IQ (Spearman's rank correlations are not significant). But for everyone who is average or above in IQ -- those who score 5 or more out of 10 -- it does (Spearman's rank correlations are -1.00, two-tailed p = 0.044). So, hunting and fishing and NASCAR are most popular with average people in red states, but the higher you move above them in IQ, the less that people are interested in this stuff, exactly as in blue states. Moreover, the downward slopes don't even look very different, so it's not as if IQ and hunting or NASCAR are more strongly related among blue state smarties.

Finally, "a smart guy in Kansas or Wyoming" is LESS likely to hunt than Joe Sixpack in New York -- I mean, really. The highest three IQ groups in red states all hunt and fish less than the below-average blue state group. This is even more true for NASCAR.

We live in a strange time when rich, educated red staters have managed to convince some people that they're in touch with the common man -- which they aren't (and of course neither are rich, educated blue staters). They don't give a shit about blasting down animals with guns or watching logo-encrusted cars zip around a speedway 500 times in a row. I just checked, and will write up the results later, but high-class activities increase in popularity as IQ increases -- in red and blue states.

Why is this such frightening news? It's something that rich, educated red staters should trumpet, not sweep under the rug: "We too love the ballet and hate NASCAR -- can't us smarties all just get along?" The elites are more polarized than the masses for social and political values (see Red State, Blue State, Rich State, Poor State), but in the cultural arena, it seems that the elites are pretty similar, while the middle differs the most between red and blue states.

To wrap things up, here are the follow-up graphs for doing sports or attending a sports event, which isn't broken down by sport. They show pretty much the same pattern as the national data, although the upper end in blue states is more physically active and attends sports events more often than their red state counterparts. 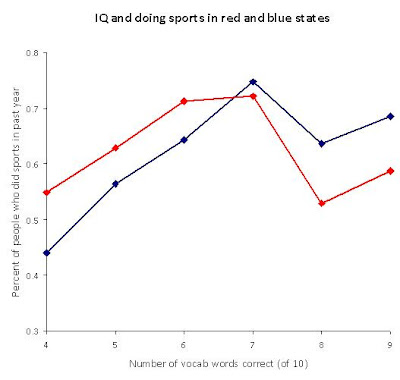 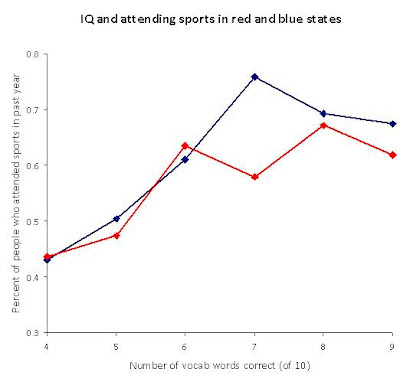 * I counted the following regions as blue states:

These regions are the red states: