The end of the witch hunt for pedophiles?

In the comments to the post about how schoolgirls should not wear schoolgirl costumes, Peter threw the word pedophile around pretty loosely, which is typical nowadays. As I pointed out in a post showing the myth of more sexual predators, the coverage that the topic gets is the opposite of what we'd expect if the reporters were simply responding to changes in, say, the forcible rape rate. Sex crimes, and crime in general, has been plummeting since the early 1990s, while fear of sexual predators has skyrocketed in recent years.

The same is true for pedophilia, which when acted on is just a subset of sex crime. As with crime in general, there has been a huge reduction in all forms of child abuse since the early 1990s. This shows that it is not simply more police on the street that caused crime to drop, as police have a tough time deterring crimes against children, which can easily go undetected. For sexual abuse against minors, the crime rate fell 49% between 1990 and 2004.

And sure enough, as with sexual predators in general, newspapers have become increasingly obsessed with pedophiles: 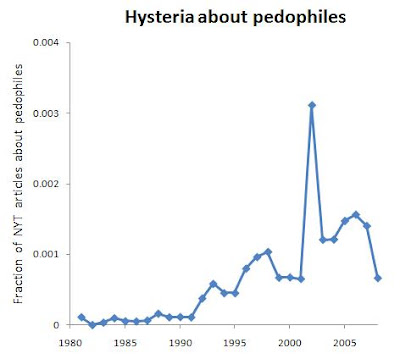 The graphs shows the number of articles with "pedophile," "pedophiles," "pedophilia," or "pedophilic" as a fraction of all articles, according to a Lexis-Nexis search of the NYT. (The 2008 point is based on the year so far.) Contradicting the idea that they're just responding to changes in the crime rate, the above graph shows that no one really cared that much about pedophiles during the 1980s, while they started freaking out after child abuse went into a steep decline. The spike in 2002 is due to a lot of coverage on Catholic priests. There's an increasing trend since 1992, but unless a deluge of pedophile-related articles comes out in the remaining month of 2008, it looks like the hysteria may be burning out.

Mass media are a good thing, on balance, but they make it possible for annoying and resource-depleting panics to spread. The witch hunts of the Early Modern period probably wouldn't have happened without the printing press, for example. Because they are rumors, it's not even possible to prevent them from spreading by, say, requiring all reporters to do fact checks before running with a story. If the article were specifically about the change in the rate of child sexual abuse, the reporter would obviously question the police, look up crime stats on google -- or at least you hope so -- and the article would be about how it's declining.

But the articles aren't like that. They focus on some DA's effort to get tougher on pedophiles, or a particular incident of pedophilic crime, and not on the big picture. So they never think to check changes in crime rates, only to fact-check the minutiae of the story. Since it doesn't seem ridiculous in the reporter's mind to cover a single incident, each one isn't even aware that they're contributing to a witch hunt -- you only see the ridiculousness by looking at the total amount of coverage devoted to a topic, and asking whether the trend makes sense given the trend in whatever they're covering.

It becomes obvious, once the panic is over, that it was stupid to believe in it in the first place, and everyone laughs about how gullible people must have been to take part in it -- e.g., fear of Satanic cults in the 1970s and '80s. But that's easy. What's harder is looking at today's conventional wisdom and seeing if it's right or wrong. The mass media themselves won't perform this in-house inspection because most journalists are just not interested in figuring out what's going on -- they mostly want to be the first to let their groupies in on their tribe's latest juicy gossip. Thankfully, the internet allows outsiders to point out when the mass media are wrong, but who knows how much of a difference that makes.