Spending money we didn't have -- a graphical view

During the dear departed housing bubble, we thought we had a lot more wealth than we really did, leading us to blow a lot of dough on showy crap that just made us look retarded anyway. Future generations will look back at the 2000s and summarize them with a phrase like The Douchebag Decade, or perhaps Decade of the Attention Whore.

Because of the "kids these days" fallacy, let's just check and make sure that these things really were specific to this decade. Here are two graphs of NYT news coverage of some specific and general references to conspicuous consumption: 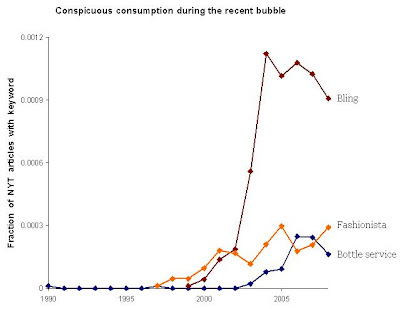 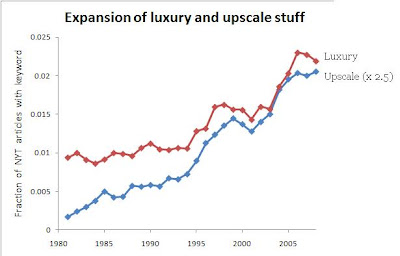 Sure enough, getting blinged out to go to a "bottle service only" nightclub, praying in vain that some coked up fashionista would pay attention to your striped shirt, was a distinctly 2000s activity.

The expansion of "luxury" items into formerly bla-bla industries -- luxury dental floss, luxury cupcake wrappers -- all began during the dot-com bubble of the mid-1990s, and stalled out when it burst in 2001. But right after the economy recovered, we were once again able to clean up after our toy dogs using luxury poop bags. "Upscale" shows a nearly identical course. * (I've multiplied the values by a constant so that they're on the same scale with the "luxury" points). This shows that I'm picking up something real here, for those who are skeptical of how useful it is to look at news coverage.

On the bright side, there is an apparent downswing in most of the graphs, hopefully signaling a lot of creative destruction ahead in Douchebagland.