Social psychology and Game: Predictors of obedience and conformity

A major complaint about pickup artist manuals is that they could simply be written to enhance the authors' reputations, to profit financially from desperate and gullible readers, and so on. I don't doubt that the authors do have these motives, but remember what Adam Smith said about ulterior motives: who cares? The question is whether or not they do what they're supposed to do. The social psychology literature has discovered several "laws" of social behavior that bear on the advice that PUAs give, and here I'll look at some research on obedience and conformity, and how to apply it in real life.

Much of a guy's in-field work consists of persuading the girl to comply with his wishes. After you two make a real connection, you do not need to worry about persuading her so much, but before that happens, a lot of your requests could be met with skepticism by most people, even something as harmless as playing thumb-war. So it is highly worthwhile to know how to persuade others into complying, especially when they would prefer not to.

The single most famous set of experiments on obedience are those of Milgram. In brief, an Orderer tells the Target (the person whose behavior is being studied) to administer painful punishments to a Sufferer who has made mistakes in some task. Milgram wanted to see how varying certain parameters affected how often the Targets would comply with the Orderer's instructions. Here is a summary chart of all of his experiments (adapted from Figure 14.10 of Peter Gray's Psychology): 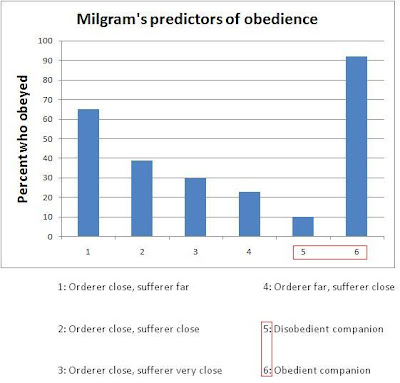 In the first four conditions, there are only the Orderer, the Target, and the Sufferer. You can see that people are less likely to obey when the Orderer is farther away (like in another room, communicating by phone), and when the Sufferer is closer (like right next to the Target). However, look at the last two conditions. These represent what happens when an additional "companion" Target is being instructed by the Orderer. In reality, this companion is in on the experiment too. The chart shows that the real Target essentially does what his companion does: if the companion disobeys, so does he, and if he complies, so does he.

Moreover, the action of the companion is the strongest predictor of obedience (a change from 10% to 90% obedience) -- even changing both of the distance parameters does not cause such a divergent result (at best, a change from 22% to 65% obedience). Clearly, you should care what other females in your target's position are doing, probably more than most other aspects of the situation. (Milgram also found that the presence of symbols of authority increased obedience rates -- more obeyed when the experiment was done at Yale compared to a non-descript building downtown. This is another benefit of wearing a jacket and tie when you're among strangers.)

Another famous sets of experiments by Asch studied conformity instead of obedience. Here, there was no authority figure instructing the target what to do. In brief, there is an incredibly easy perceptual task for the target to complete, and Asch wanted to see how the presence of others who gave incorrect answers would influence the target's answer. A group of people are in on the experiment and purposefully give wrong answers. Does the target believe his lying eyes or conform? Most people give at least one incorrect answer, in contrast to nearly never doing so when they are alone.

Ah, but what if one of the others dissents? They could either give the correct answer, or a different incorrect answer. In either case, this causes the target to go with their gut and give the correct answer after all. It only takes one dissenter in a large group to cause this change. Clearly, if you want her to conform, you had better be worried about whether there's even one bad apple in her group.

First, Asch's experiments explain the cockblock phenomenon. Everyone else in the group, including the target girl, could be going along with what you say -- but even a single dissenter makes the others very likely to ignore your wishes, and you irrevocably lose the pursuit at that point. This justifies the advice to not work on the target girl first, but to charm over and defuse any potential dissenters first. This doesn't ensure that the fat, ugly friend, or the bitter man-hating friend won't pipe up later on, but it's the best you can do.

Milgram's experiments support the importance of being physically close to your target girl when making any request of her, other than perhaps asking her opinion as part of your opener. For example, if you want her to dance with you, don't stand two arm-lengths away and extend your hand -- get close to her and take her hand. And for the love of god, don't try to wave her over to you when she's a good 20 feet away or more.

They also explain why having female wingmen (or "pivots") is more important than having male wingmen. Your target girl is less likely to perceive your male wingman as another version of herself, while she could easily see your female wingman as her counterpart. And since your female wingman is going to do what you say (within reason), your target girl is almost guaranteed to play along with any compliance tests. Shit, I'll bet if you had an adventuresome female wing, you could make up an "ass-reading" compliance test, where you claim to read her personality and life prospects from cupping her ass in your hands, as long as you demonstrated it first on your comfortable, laughing female wing.

So, based on Milgram's and Asch's findings, I would suggest that you should always include at least one female wingman in your group, with guy friends being optional. And don't worry if she's not a model -- hell, you could even talk to a plain but compliant girl when you first get there and recruit her as your friend for the night: she will serve the purpose well enough for when you find a target girl. The key thing is just having a female who will go along with your compliance tests, laugh at your jokes, fondle any squeezable props you've brought along, and so on.

Milgram's and Asch's experiments tested how people behave when they find themselves in highly unusual circumstances -- being ordered to nearly kill a person for making mistakes, and being surrounded by people who claim that two clearly different lines are of the same length. Don't expect their results to generalize to when you need to persuade people in ordinary circumstances, like taking out the trash. But when you're gaming a girl, a lot of it will be pretty unusual to her -- like asking her if she's smart, baiting her into touching you, etc. -- and so she will look to see how others like her are responding.

There is debate in the social psych lit about whether this is due to "informational" or "normative" influences -- whether she says, "the others must know something I don't," or "I don't want to stand out as a weirdo," respectively. But for improving your game, it doesn't matter why they conform or obey, as long as they do.