Cultural products don't tell us much about what they depict

If historians 500 years into the future scour our high and popular culture to see what life was like, they would not learn very much. They would observe an increase in the popularity of thongs and lowering waistlines during a time when promiscuity was decreasing. This is because fashion cycles play out in their own world, divorced from real life. They would also note the savagery of the upper classes in TV shows, movies, and just about everything else, even though it's mostly the poor who are barbarous.

Where does this idea come from anyway? It's not like a fashion trend, but artistic themes do live in their own realm, also separate from reality. Sure, they may be based on fact when they begin to spread, but these themes may "take hold" in the literary and artistic culture, all while the facts on the ground are shifting away. That seems to be the case with the "barbaric rich" cliches that continue to sucker large audiences. Here is a table (from this article by Manuel Eisner) showing the percent of criminals who belonged to a given social class, and the size of that class in the general population, from 14th Century Venice (click to enlarge): 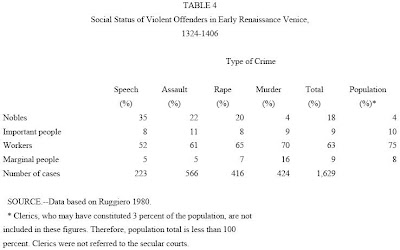 So, if a late Medieval TV writer portrayed the rich as violent, it would be fairly accurate. But once that image becomes established in the cultural canon, it can be hard to shake it out since it appeals to human envy -- those scum who have more power than I do must have gotten it through greed, violence, ruthlessness, etc. Envy of our superiors is also what drives us to see hypocrisy in all of their actions -- sure, they may act civilized, but they'd rape and kill their closest friends if they thought they could get away with it!

Even though I don't have much of an interest in history (yet...), I've still seen far too many historians using cultural products as evidence to support their hypotheses about real life. If they were only discussing the history and fashion trends of intellectuals, artists, and elite culture, fair enough. As for everything else, at best, fictional art can put a human face on the story that the non-fictional data tell. But if I have to hear one more time about how Westerners became more terrified by the irrational just because some Viennese quack duped a handful of arts majors with his psycho-snake-oil...