First, the thong. I did a simple Google search for "+thong +sales" to confirm my hunch that it is no longer popular -- I remember them being very popular in college (1999 - 2003), and I still recall that silly "Thong Song" booming from every car radio, but that seems like another lifetime. Sure enough, a pile of results show that the thong, while still present, has been vanishing since at least 2004. Here is the most recent account I could find, and it shows that the downward trend holds in Canada, the US, and the UK.

At the height of thong sales in Canada, NPD reports that the cheeky underwear represented slightly more than 16 per cent of the national underwear market. But by 2007, thongs had slipped to a 12-per-cent share, indicating a 4.3-per-cent fall.

In the U.S., NPD shows thongs have gone from representing 23 per cent of dollar sales of underwear in 2004 to 17.7 per cent in 2007. As in Canada, the decline is the steepest of any of the seven major styles of underwear observed in that period.

The U.K. has seen the biggest drop of all, with thongs having represented a third of all underwear sales in 2003 but just 12 per cent of sales in 2007, according to British retail analyst TNS.

Be very cautious about imputing a cause to the decline post-hoc, such as a change in women's underlying preferences. They were crazy about thongs before, and now that they're no longer trendy, they make up a story about having matured and seen the light. Women will conform to whatever bizarre crap that Elle and Vogue give them the green light to wear, and journalists will then divine in the zig-zagging some deeper purpose.

What's replaced the thong, by the way -- something even more indecent?

"Boy shorts" are to today's lingerie market what the thong was in the early part of the decade. . .

Lest you think this is confined to those who are presumably already mature enough to desire modest clothing, take a look at uber-trendy American Apparel's underwear selection. They target primarily 18 to 29 year-olds (maybe just 18 to 25), and there's hardly a thong to be found, just boy shorts galore.

Second, what about low-rise jeans -- they still seem to be very common. Perhaps, but they too are on the way out. Here is a 2006 report from Newsweek. Let's check in with teen favorites Wet Seal and Forever 21 to see if high-waisted pants have made any progress there. What do you know? There are quite a handful of high-waisted jeans and pants at Forever 21, as well as among the jeans and pants at Wet Seal. Their growing popularity is also evident in the shorts and pants offerings of American Apparel. As long as they can be made to look cute and trendy, girls will wear them.

But in the meantime, we'll still have to endure those low-rise waists and midriff-baring tops, right? Can you remember the last time this look was very common? What I've seen more of over the past few years is this look: 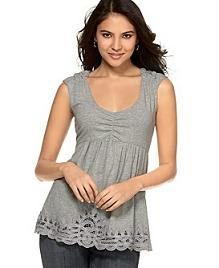 Some girls wear one really long shirt that goes halfway down their butt, and to keep it hip they layer another, shorter shirt over the protective one. By the way, the fact that girls are always tugging down their shirts and sweaters in the back is evidence that they are wearing these things to fit in, not because they prefer them deep down. And while we're talking about tops, what about the recent popularity of babydoll tops like the one pictured above, or of Empire waist tops and dresses? They don't cling at all to the body below the chest, and they flow pretty far down below the waist of a girl's pants or jeans. This trend contradicts the view of ever eroding standards of decency, so it has gone completely unnoticed.

(As an aside, high-heels are supposed to be sexy -- I don't think so, but that's what they say. Taking that for granted, though, girls are wearing less sexy footwear in recent years too, as the popularity of ballet flats has skyrocketed. Again, something that's gone unmentioned since it doesn't support the declinist view.)

And finally, the tattoo -- even if she wears high-waisted pants and a tunic over top, what about that tramp stamp lurking beneath the surface? Tattoos also show a sharp downward turn in popularity. I will write more on this topic at GNXP.com sometime soon, but for now, I note that according to the only existing national, representative study of body art demographics, tattoos held steady in prevalence among those born between 1953 to 1964, increased steadily up through the 1977 - 1980 cohort (of whom 42% are tattooed), but dropped off among the 1981 - 1986 cohort (of whom 33% are tattooed). Body piercings decline starting in the '77 - '80 cohort, although not as sharply as for tattoos.