These things are probably out of fashion, and not so long gone that bringing them back is ironic and hip. So, at risk to my unimpeachable coolness credentials, I made one (you can make yours here): 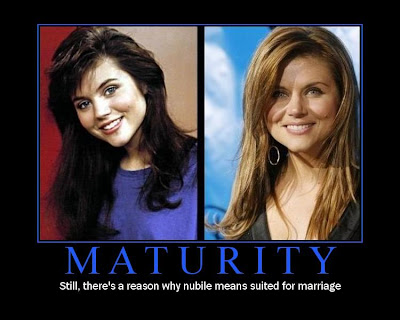 Yet the pesky truth finds some way to jimmy the door open and remind you that her looks are at best one-half as above-average as before, her girly charms even less so. And she's marginally more intelligent, urbane, and witty than she used to be -- like you care.

It's true that some women manage to remain semi-attractive and to age gracefully, but these are almost too rare to bother searching for. It's far simpler to take a young girl, who will be quite attractive due to youth alone, and for whom aging gracefully is a problem she won't have to worry about for nearly 10 years. Marry and start a family with her well before that deadline, and she'll be too occupied by motherly duties to embarrass herself socially as a still-sorta-got-it cougar.

Women love to gloat about the civilizing role they play in men's lives, which would otherwise resemble Lord of the Flies. There's some truth in that, although our intervention is just as necessary for them to avoid ruin from their own silly goals and obsessions.