Changing your name -- a free facelift?

Names go through cycles of fashion, as Stanley Lieberson shows in A Matter of Taste, a must-read book for anyone interested in cultural change. Unfortunately, that means that your name can quickly become out-of-date, as mine has, I was disappointed to learn. It peaked in popularity right around the time of my birth and has declined (although not plummeted) since, even if it's not obscure today. "Although," "even if" -- who am I kidding, I've never met a pimpleface with my name.

Every time I meet a high school girl at the teen dance club or the mall, or sit down with a college girl at the campus dining hall, my babyface and slender frame keep her from wondering how old I am. (Well, not so much at the teen dance club -- I get asked how old I am about one time each night, but they don't suspect I'm 27, more like 22, which is still old enough to them.) Still, once she learns my name, that will knock against the unconscious histogram she has of her male peers' names. She may not even be aware of just what is arousing her suspicion; she will just get the feeling that I'm older than I appear.

So is it worth it to change your name in order to appear younger -- not out of vanity, but just to go undetected more easily? I can understand the respect that is paid to family names, but there's nothing sacred about your given name. And given how quickly it can go out of fashion, it's like having to wear the clothing that was stylish in your birth year for the rest of your life -- no thank you. Sure, I could just keep my name and lie when I'm around youngsters, but lying is hard to get away with over the long-haul, and I could never allow them to meet anyone who knew my current name.

I know, you can barely contain your curiosity -- just what ludicrously nouveau name would I adorn myself with from here on, or at least until it too stops being stylish five years from now? Easy choice: "Dylan." Its popularity peaked in the late '80s or early '90s, so it would sound completely ordinary to a girl born then. Use this tool and type in "Dylan" with "boys" checked to see. (And if you want to feel really old, go ahead and type in your own name.) Importantly, it doesn't sound too upper-crusty (like "Preston") or too trailer parkish (like "Jayden"), so it should have wide appeal. To be fair, though, all of these names are too new and stupid-sounding for me to know much about which class they're most popular in.

Want to update your own name, or at least see what funny names kids these days have? Here's a list of the most popular names in the 1990s, although be sure to cross-check with the tool above to see whether its popularity is increasing or decreasing. For example, "Michael" and "Jessica" are the most popular, but Michael peaked in the 1960s and Jessica in the '80s, and both have been declining ever since. "Tyler" (boy) and "Taylor" (girl), while less frequent, are still near the top in popularity but are also at their peak in the 1990s. 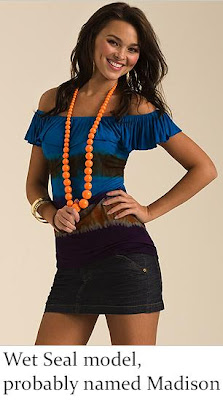 I'm not gonna lie: my brain releases a little packet of endorphins every time I learn a teenage darling's name. It's not only their skinny jeans and ballet flats that set them apart. Just knowing that her name is Sophia, Chloe, or Madeline -- or, yes, even questionable ones like Hailey, Kailey, and Bailey -- you can rest assured that she has many estrogen-filled years ahead of her. And imagine the bragging rights when you introduce your girl to friends and colleagues: "I'd like you to meet my girlfriend, Zoe." Sure, they'll be able to tell that she's a young 'un by looks alone, but her name will lodge itself deeper into their brain. "Wait, did he say her name was Zoe?"

Use this info to playfully tease older women you want. Never ask her name first: when she asks you, you have a clear indicator of interest. But before she can respond, interrupt her: "Wait, let me guess... you look like your name would be... Rose!" Say this playfully, with a joking look. You must hit her insecurities about age if you want an older woman -- or so they say, I don't bother. Right after she feels the sting, say you're just kidding while elbowing her, and then guess a more appropriate name like "Christine" or "Kelly."

I think this would also work if you started out guessing an impossibly young name like "Riley," just to highlight how not young she is. She would probably respond, "Riley? Do I look like I'm 20 years old?" And boom, once she hears herself say that, her self-esteem will melt into a puddle and she won't be able to put up much resistance. This approach has the added benefit of not being overtly insulting like guessing "Rose" does, so there's no way she could get angry with you.