Lower turnover in popular culture after 1980

Do people have shorter cultural attention spans these days? Is cultural change more chaotic than before? No, judging from the popularity of TV shows, which are as good of an indicator of popular culture as any.

I used a simple measure of cultural turnover: of the 10 TV shows with the highest Nielsen ratings in a given year, how many of them were not already in the top 10 in the previous year? If it is 0, then the popular shows of last year are the same as this year; if it is 10, then last year's popular shows have been completely replaced this year. Choosing the top 10 instead of 20 or 30 is arbitrary, but I just want a feel for change over time. (This is how Stanley Lieberson, in A Matter of Taste, measures cultural turnover in naming tastes.)

The data start in 1951 and go through 1999, with only 1987 excluded due to a goof in the website's lists. If a TV show was listed twice in a single year (e.g., if its Thursday and Saturday episodes were both highly watched), I expanded that year's list to include 10 unique shows. That only happened twice. Here is the turnover rate across the decades: 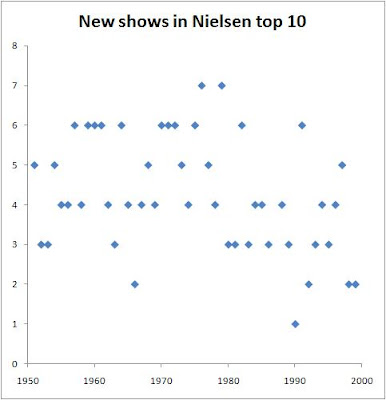 It looks like there's a downward trend after about 1980, but let's be more specific. Using either of two rank correlations between year and turnover rate shows a significant and negative relationship: Kendall's tau = -0.22 (p = 0.037, two-tailed), and Spearman's rho = -0.32 (p = 0.048). The median and mode of the turnover rates are both 4, so we can look for when the turnover rate was consistently higher or lower than 4. For the below-4 values, there is a very clear separation between a chunk from 1980 onward and a handful of outliers in the '50s and '60s. Likewise, for the above-4 values, there is a chunk pre-1980 and some outliers afterward. I've shown this by modifying the graph above: 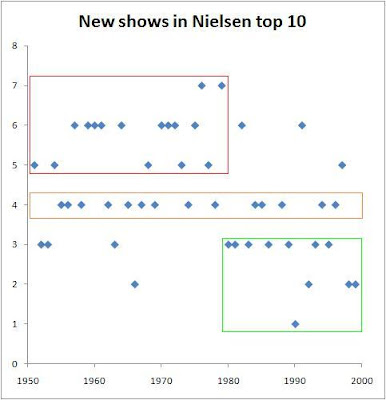 The pre-1980 period is characterized by a high turnover rate -- 4 above-median values for every 1 below-median value -- while the post-1980 period shows greater stability -- 3.7 below-median values for every 1 above-median value. So, it was the popular culture of previous generations that showed greater fickleness, a shorter attention span, and so on. Of course, members of those generations will spin these results as showing that their popular culture was not fickle but innovative, while the current one is not focused but static. This is how Steve Sailer describes the recent history of rock and rap music, for example, and oddly enough he pegs the start of stylistic stagnation in the early 1980s as well.

Whatever emotional coloring we give to the facts, there's always a downside to innovation: more failed experiments are broadcast as a fraction of the whole, and what good stuff that is produced doesn't last very long. Wild innovation is great in science, and when used by a genius in the arts. However, science permits greater experimentation because the only constraint is that the innovation be on the right track in modeling the world. The arts are far more constrained: they must please the human mind, which is a picky eater. Especially when you get to the level of talent found among TV show writers -- just find something good and stick with it as long as you can.