Decline in crime has weakened Americans' will to contain homosexuality

Earlier I showed that Americans have gotten much softer on crime as a result of the fall in violence rates over the past 20 years, so much so that women used to be more thirsty for revenge than men are today.

At first glance this looks sensible -- if the problem recedes, don't devote as much effort to curbing it. But of course that lax attitude will only allow the problem to re-emerge after our alertness sinks below some threshold. It is like seeing that the chicken pox vaccine has lowered the prevalence, so with each new batch of infants, we don't have to worry so much about giving them the vaccine. The pathogens are still out there ready to infect our children, so we have to give them vaccines until the bug is effectively gone -- if that ever happens. Unlike smallpox, though, evil will never be eradicated from any human population. So we soften our tough-on-crime attitudes at our own peril.

A similar pattern emerges in the area of allowing vs. containing homosexual behavior. This should be a no-brainer: a conflict of interests is built into the relations between men and women, for reasons that are not relevant here (see any pop evolutionary psychology book), and natural selection has designed individual men and women to try to advance their own interests while not being exploited in agreeing to serve the other's interests.

There is thus a negative feedback loop in male-female relationships, from courtship through mating and parenting, whereby the male keeps the female in check and vice versa. Men keep their women from being such boring, nagging, asexual creatures as they might prefer deep down, while women keep their men from being such reckless, belligerent, hyperpromiscuous animals as they might prefer deep down. Not only are the individuals concerned made better off, but this better regulated system makes the society as a whole a more enjoyable place to live in.

In stark contrast, homosexual relationships break twist this negative feedback loop into a positive feedback loop, since two male minds are much more in synch with each other's desires, and so are two female minds. With the natural fetters of checks and balances torn off, males veer off on a path that is not just more harmful to themselves but to broader society, and ditto for females who become overly womanish.

Although both are in need of containment, we don't care so much about lesbians for a good reason -- women tend to be less harmful to themselves and others than men are. The exaggerated female lifestyle that lesbians embody only raises the society's level of boring and nagging personalities, and slightly drains its overall libido level ("lesbian bed death").

In contrast, the exaggerated male lifestyle that gays embody has proven disastrous to themselves -- witness the AIDS epidemic, as well as the rampant drug use and completely dehumanizing social relations, which rarely rise above meat-market interactions, that are reviewed here. Apparently that was only ended when they woke up to the consequences of their actions. While they were never capable of spreading AIDS into the broader society, they have psychologically poisoned the wider pool of straight females who we straight guys have to interact with, as I detailed here and here in the context of fag hag ego-inflation. Finally, the broader acceptance of homosexuality has killed off whatever entertainment talent they used to have that the rest of us could enjoy. Compare the music of Freddie Mercury, Rob Halford, and George Michael to k.d. lang, Lance Bass, and Clay Aiken.

So, containment of homosexuality is a good thing for everybody. And yet, as anyone who hasn't been living under a rock surely knows, tolerance of it has been shooting up. At the same time, the data suggest what might turn that around at some time in the future.

The General Social Survey asks three questions whose responses show the dramatic recent change in tolerance of homo activity. One asks how wrong homosexual sex is (HOMOSEX -- lol at the names of some of these GSS variables), how much you agree that they should be allowed to marry (MARHOMO), and if a book in favor of homosexuality, written by a homosexual, should be removed from your public library (LIBHOMO).

As I did in the case of attitudes toward crime, I've plotted the trends over time for two groups, one who tends to be more liberal and the other more conservative on the issue, during any given time period. If the change is as extreme as I'm making it out to be, then we should see that the liberal group from earlier times used to be more conservative than today's conservatives. Recall that women from 1980 to 1996 used be screaming for vengeance more than men are today. In the graphs below, the blue line represents the percent of females aged 18-29 -- the group we associate with fag haggery today -- and the red line is percent of males aged 30-44 -- the group we associate with backward bigotry (boooo!!!). You know the world is in a sorry state if today's middle-aged men are more cowardly than the young women of the not-too-distant past. 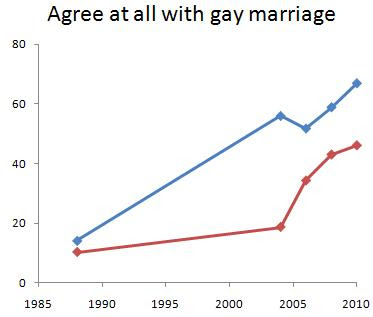 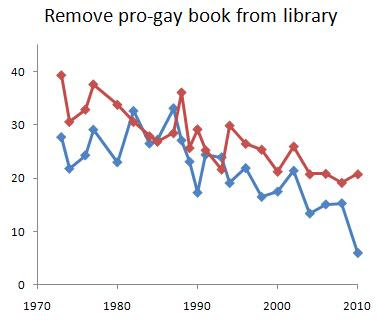 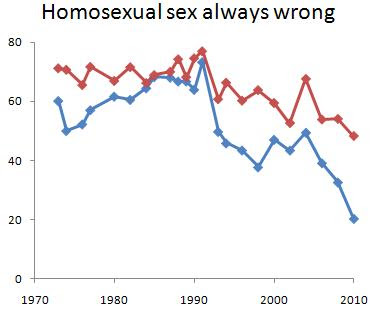 No surprise that support for gay marriage is way up, although compare young women from 1988 to middle-aged men from anytime in the past decade. Only 14% of young women used to support gay marriage, whereas middle-aged men have been in favor 19%, 34%, 43%, and 46% during the mid-late 2000s, all more pro-gay than young women's views from 1988. The gap has widened quite a bit, too, a general pattern: in 1988 it was 4 percentage points, whereas during the 2000s it has varied between 16 to 37 points. As in the case of attitudes on crime, quite different groups in society were more on the same wavelength during rising-crime times, one manifestation of greater solidarity when we've got to take on a dangerous enemy.

Support for removing the pro-gay book from the library has slid steadily among men over the entire past 40 years, although there was a 2-year anti-gay resurgence in the late '80s. Among women, support actually increased during most of the crime wave, peaking in 1988. This contradicts the view that before the gay awareness and tolerance shift of the 1990s, there had always been some constant level of anti-gay sentiment. In fact, it was increasing along with the crime rate.

My hunch here is that in the days when people were more aware of child molesters, teenage prostitution, and serial murderers, they grew more concerned that a pro-gay book would have encouraged or apologized for sick behavior in general, and in particular if gays were more likely to procure underage runaway prostitutes, entice teenage boys with drugs, fondle their 12 year-old charges if they were a priest, and so on.

Again we see that young women from the not-so-distant past had more anti-gay views than middle-aged men of recent years. We also see the near overlap of views during the height of the crime wave, and a divergence since then.

Belief that homosexual sex is always wrong shows the pattern most clearly. Middle-aged men held this view at a constantly high level during rising-crime times, peaking in 1991, after which the belief steadily dropped until in 2010 it was no longer a majority view (at 48%). Young women became more intolerant of gays during rising-crime times, again contradicting the view that there used to be some constant level of anti-gay sentiment. It went from around 50% in the mid-'70s to a peak of 73% in 1991, after which it has all but vanished, with only 20% believing it in 2010.

My hunch is the same as earlier -- that when people started seeing a rise in depravity in the world all around them, not just from gays but including them, they withdrew their support for an anything-goes, do-whatever-turns-you-on code of behavior. Once the signs of encroaching sinfulness started to fade away, however, they figured "problem solved" and have returned to the tolerant and sympathetic views of the 1950s. You never saw a hard-hitting portrayal of gay depravity in Leave It to Beaver: they were not worried because things looked like they were going along smoothly.

Turning off their defense system in this way of course set the society up for the invasion of criminals who sensed that the average person had grown so naive that they could make a killing and get away with it. They were right. We will see something similar happen after abandoning our watchtowers for so long, not just with respect to violence in general but also the dangers of unchecked homosexuality.

The record of the last crime wave, however, should give us hope that, although it may take some time for it to kick in, people will recognize the threat and go into attack mode again. But that won't happen by magic: someone needs to be pushing it all along, so that when the attitudes in the broader society shift from inert to combustible, there will already be a flame kept burning to ignite a widespread social transformation.