Can people tell what's going on?

There's a question in the post below about whether the crowd's perception of trends is reliable or not. The evolutionary take is that people will be good at detecting trends that are highly important to their survival and reproduction, that are persistent, and that would have varied in our ancestral environment (if some variable were constant, there would be no need to pay attention to its rate of change).

The homicide rate fits these criteria. Your survival depends on knowing how much violence is going on, at least where we have data the homicide rate can swing up and down over the course of decades, and its level is not a given -- you have to learn it while growing up, and pay attention to whether it changes direction even after that. Even in very violent societies like the Yanamamo, there are cycles of greater and lesser warfare and raiding, so there's no constant level of homicide in pre-state societies.

The General Social Survey asks people a question (called FEAR) about whether or not they're afraid to walk the streets of their neighborhood at night. This graph plots the percent of respondents who say they are afraid (in blue), together with the homicide rate (in red). The fear data are from 1973 to 2010, about every other year; the homicide data are annual from 1970 to 2009. 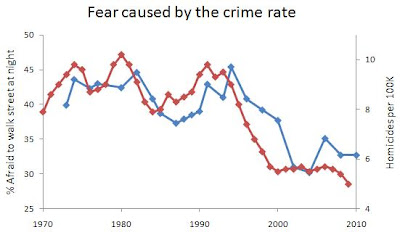 Not only do people have a good perception of how dangerous and scary their world is at the bird's-eye level, picking up the high level of violence of the 1970s and '80s, then becoming less worried during the '90s and 2000s. But they are sensitive even to temporary fluctuations, such as becoming somewhat less afraid when there was a respite in the early '80s, then ramping up their fear again when the homicide rate resumed its high level for the rest of the high-crime times. Because these two track each other so closely, almost year for year and zigging and zagging in sync, we can be sure that they aren't spuriously correlated, as you might find when two variables go steadily up throughout the whole period.

It's not clear whether people's perceptions respond right away or maybe with a lag of a year or two, as they wait for more than a single year's experiences to confirm their hunch. The key point is that people's perception of changes in the violence level is amazingly accurate. For perceptions that are shared by a broad cross-section of the population, that last for a long time, and that are related to areas of life central to Darwinian fitness, our first assumption should be that the mob is right, and that the priestly-bureaucratic class who's denouncing them as fear-blinded animals are trying to keep them from believing their own lying eyes.