Conformity and lack of shame

The brou-ha-ha over Dominique Strauss-Kahn's alleged molesting of a hotel maid in New York brings up an interesting question -- is conformity good at making a society more pro-social? The French pride themselves on how conformist they are. When everyone knows their place and behaves as they're expected to, the machine operates smoothly.

In the more rambunctious and informal and less ritualistic Anglo countries, we would seem to be always on the brink of chaos -- there's less of a behavior plan set down for us, and even if the codes were clearer, we would still be more likely to tell the planners to go fuck off and search for a more docile race of slugs to order around. (Maybe the Chinese.) How could pro-social behavior ever emerge without powerful pressures to conform to the set of roles that are there to make sure social life goes along without a hitch?

Well, as it turns out the Anglophone countries are dramatically more pro-social than more conformist, formal, and ritualistic countries such as Japan, Spain, Italy, and -- yes -- France. The OECD recently released a bunch of data on social indicators in the rich countries, one subset of which deal with social cohesion. Only one of these indicators measures a costly action rather than cheap beliefs, so we'll look at that one. At the link, go to section 8 and find the spreadsheet for "Pro- and anti-social behavior." They've already made a visually simple chart that I won't paste here since it would get shrunken too much to be legible.

Their pro-social indicator is just the percent of people who in the past month either volunteered their time, gave money, or helped out a stranger. The average for the OECD is 39% making these small but helpful sacrifices. America leads the world at 60%, with Ireland just a shade behind, followed by Australia, New Zealand, the UK, Switzerland, the Netherlands, and Canada, who score from 54% to 59%. (There is a large drop-off with the next group of countries.) The more formal countries mentioned earlier are much less pro-social: only 31% of the French sacrifice in these ways, 30% of Spaniards, 27% of Italians, and 26% of Japanese.

Is this pattern general? Yes. The OECD report also has a good-enough measure of conformity -- the percent of communities that report some degree of tolerance for minorities, gays, etc. It's not perfect, but it is a measure of how much deviation from the norm is sanctioned. Among the developed countries, here is the relationship between pro-social behavior and tolerance: 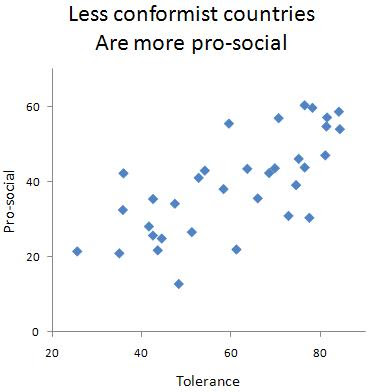 One way to look at these data is to ask how much more likely people in the Anglo countries are to sacrifice -- about twice as likely. A better way is to convert these percentages into z-scores, which will tell us how far apart the average American is from the average Frenchman -- 0.75 standard deviations. To make this easier to understand, if we considered the tendency toward pro-social behavior as though it were height, it would be as though Americans were 2.25 inches taller than the French on average. That size of a difference would be noticeable to any clear-sighted observer of both societies, such as Alexis de Toqueville.

How can the Anglo countries wind up morally stronger than the others, if we are floating adrift without the pressures of conformity to steer us in the right direction? The answer is that by refusing to outsource our moral sense to some abstract set of social conventions, and instead internalizing it as a rule of thumb to "do what you believe is right," we're able to tap far more deeply into the reptilian part of our brain. Acting more on instinct than on calculations of the costs and benefits of obeying vs. disobeying the role structure, we are much more likely to feel a sharp painful sting if we think about doing something wrong, and conversely to feel impelled by our own involuntary nervous system -- not by an awareness of the desires of others -- to do the right thing.

Where we ever got the idea that social conformity is the superior way to produce good behavior is beyond me. It's like imitating 12 year-old girls, whose world is governed by conformity, rather than grown-up men, who don't need anyone else to prescribe to them what's acceptable and unacceptable behavior. We didn't even need a theory about how the mechanistic chain of causation worked -- all we had to do was look at hollow husks of a society, such as France or Japan, where conformity rules, in stark contrast to more spiritually vigorous countries like America or Australia where we don't need planners to tell us what to do.

We see this split even within our own country at different points in time. During the highly conformist 1950s, and even the '60s to a lesser extent (remember that the counter-culture was a fringe), the average American was morally rudderless. That was the era of the Silent Generation and the Man in the Gray Flannel Suit -- just do what you're expected to by your superiors, and you'll be rewarded with a Barcelona chair for your office and a space-age vacuum cleaner for your wife. It took until the more don't-tread-on-me era of the later '70s and the 1980s for Americans to rediscover the more robust moral compass within.