Vanishing nudism only kept alive by middle-aged and elderly

An earlier post has detailed the disappearance of exhibitionism among young people over the past 15 to 20 years, based on the prevalence of streaking, flashing boobs at a concert, and topless sunbathing.

Now the Wall Street Journal reports on the decline of nudism in America. They won't say when membership began falling, and in my googling I found out that the two main nudist organizations don't release statistics, and that when they do, they're frozen in place for a decade or more, making them completely unreliable. For example, the American Association for Nude Recreation said as early as 1996 that their membership had swelled to 50,000. That figure continues to be reported unchanged at least through 2006. Somewhere in the mid-late-2000s, they admitted internally that membership had fallen to around 40,000.

So, there is no data to piece together to find out when the decline began, not surprising since these advocacy groups want to make it look like nudism is just as popular as it ever was -- "people still tell me I look 38!" The other statistics they offer are not helpful either: these always say that just over 90% of their membership is over 30 -- great, but does that mean that 90% are over 50 as well? The WSJ article does say that nudism began flourishing in the 1960s and '70s, so based on every other pattern we've seen, it probably lasted through the '80s, with the '90s as a turning-down period, and no-longer-ignorable decline by the 2000s. 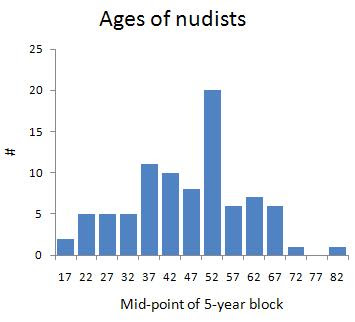 The average age is 46 and the median is 49. Based on my googling before finding these data, where only impressions were given, I'd say the median is closer to the truth, as most people guessed that the typical nudist was about 50. The block with the most members is the 50-54 age group, who were born around the mid-1950s. Because they stand out so much more than the rest, they probably show when it was most popular among young people. Assuming that you get into it when you're about 20 (when the personality trait Openness to Experience peaks), that puts the peak popularity of nudism somewhere in the mid-'70s, right along with the golden age of streaking. Most of the other nudists are older Boomers and older Gen X-ers.

So just as we saw with other forms of exhibitionism, they were only popular among those who came of age during rising-crime times. Once violence rates began falling, causing the society to turn less promiscuous and thrill-seeking more broadly, the new ranks of young people didn't get turned on by them. As a result, the only people keeping those older ways alive are the ones who got into it back during its heyday. Unreplenished with younger members, this population grows grayer with every year.