Here's the original post that explains the methodology and looks at religion and love themes in pop music titles. To reiterate, we look at the #1 songs on the Billboard Hot 100 and see if their titles mention some theme. For a given year, the index of the theme's prevalence reflects the number of different songs, as well as the number of weeks that this whole group of songs lasted at #1.

Below are two graphs showing how common color terms have been, as well as the theme of life and death (any variant on "life," "living," etc. and "death," "die," "kill," etc.). 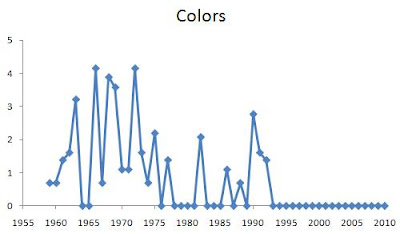 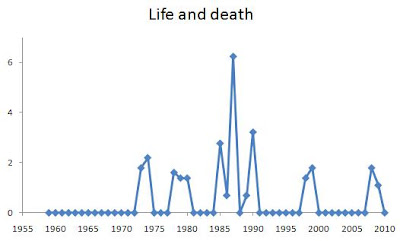 Color terms show up only during rising-crime times, from 1959 to 1992, being totally absent from 1993 through 2010. As I've detailed before, people become more artistically creative during times of soaring violence; their minds open up to see a wider expanse of the world, and they try to provoke more of a response in the audience. Part of that is simply painting a more vivid picture, and few things there are more basic than using color terms.

There is a second-order pattern, too, where the bulk of songs with color terms show up during the first half of rising-crime times, and endure but at lower levels during the second half. This is the split between a period of initial experimentation, when artists are trying to expand the horizons of our perception using the most basic tools, like showering our eyes with the full spectrum of colors to wake us from our sober and drab slumber. The peak period for color terms in song titles is roughly 1966 to 1972, the heyday of psychedelic imagery. The second period of experimentation rises above the lower-level visual processes like color perception and experiments with more sublime imagery, such as the many religious references shown in the original post in this series.

The theme of life and death also shows up mostly during rising-crime times. There are 4 years in falling-crime times, each with a single counter-example, that go against this trend, although even these exceptional songs only treat the theme of life and not death: "All My Life" in 1998, "Livin' La Vida Loca" in 1999, "Live Your Life" in 2008, and "My Life Would Suck Without You" in 2009 (catchy title, eh?).

It's not surprising that times of rising crime direct the mind toward the themes of life and especially death. Still there is a second-order pattern where most of this emerges during the later half of rising-crime times, when people have shifted into a more apocalyptic mindset. The first years of 1973 and '74 had three songs with death-related words in the title: "Killing Me Softly with His Song," "The Night Chicago Died," and "I Shot the Sheriff." The peak period is 1985 through 1990, and the year with the greatest prevalence was 1987, which saw "Livin' on a Prayer," "(I've Had) The Time of My Life," and "(I Just) Died in Your Arms."