The decline in violence has weakened Americans' tough-on-crime stance

Well then, everyone knows dick about American attitudes on crime.

In a post down below, I showed that people's fear of walking the streets at night just about perfectly tracks the homicide rate. This shows that ordinary people can figure out for themselves when the world is getting safer or more dangerous -- the average person is not following the Bureau of Justice Statistics' reports, but drawing on their own experience, the word-of-mouth information from others in their social networks, and the sensational and therefore unforgettable stories on the evening news.

Given that, it's possible that their attitudes toward fighting crime would change as the crime rate itself changed. It's not necessary -- they could maintain the same war-on-crime stance no matter what, the way that they might have their children vaccinated against diseases that have become rare. That's certainly the mainstream view of the mainstream view on crime.

The General Social Survey asks respondents several questions about fighting crime. Three of these questions have been asked long enough -- since the early-mid 1970s -- for us to see how, if at all, they reflect the change up and down in the homicide rate. Here is the percent of people holding tough-on-crime responses (in blue), along with the homicide rate (in red): 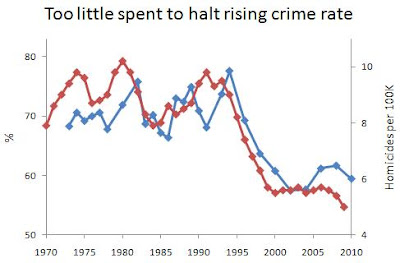 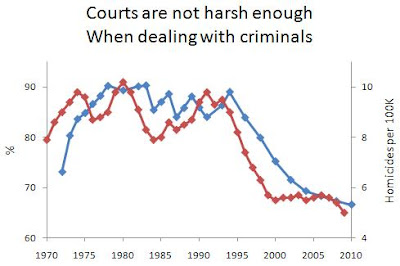 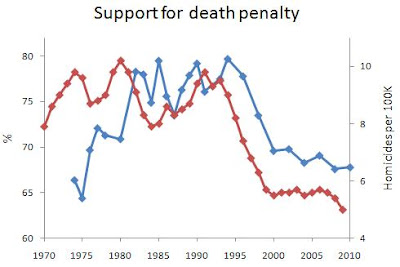 As with people's fear of walking the streets at night, so do their attitudes on fixing the problem of crime respond almost perfectly to changes up or down in the homicide rate. When it goes up, people want more spending to halt it, harsher treatment of criminals by the courts, and more executions for murderers. This even carries over a couple years after the peak in the homicide rate, as though people are not going to get soft on crime right away -- they wait for a pronounced steady decline "just to be sure."

Over the past 15 years, though, Americans have lost their formerly high level of bloodthirstiness when it came to dealing with criminals, although a majority still support these policies. And who knows what will happen as the homicide rate falls even futher? Support for these views is already or soon will be nearing 60% -- once it falls below that, I don't think it would be too hard for government to ban the death penalty, give up the War on Crime mindset, and return to the pity-the-poor-criminal treatment of earlier and safer times. This will start another round of rising crime all over again.

How can we get a better feel for just how great the softer-on-crime shift has been? We will consider support for the tough-on-crime views to be a threshold along a continuum of beliefs, with the left side being soft on crime and the right side being tough on crime. We then pick a threshold -- support for the death penalty, say -- and ask what percent of people from one time period were at least that tough-on-crime, and what percent from another time were. We can convert these percentages into standard deviations and compare how far apart the average person was in one time vs. another time. (This is La Griffe du Lion's "method of thresholds.")

It's like using the percent of people who can dunk on a basketball court to tell how much taller or shorter people have gotten over time. So to make the changes vivid, I'll talk about them as though the average American has gotten shorter since the mid-'90s -- by how much, and in how brief a time, is the question.

In fact, the change is so dramatic that there are some amusing -- or perhaps depressing -- reversals of who we think of as screaming for blood vs. who wants to treat criminals with kid gloves. At any given time, men are more tough on crime than women, conservatives more so than liberals, high school-educated more so than college-educated, and middle-aged more so than youngsters. In the graphs below on support for the death penalty, this is shown by the red line being at or above the blue line in any given time period (click to enlarge). 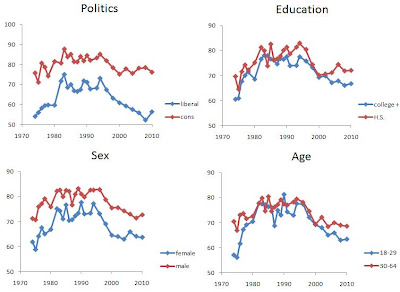 However, throughout the heyday of feeling like striking back at criminals, the normally weak-on-crime groups were equally or even more clamoring for the sick fucks to be crucified. Look at the blue line between roughly 1980 and 1995 -- it's either as high as, or higher than, the red line was in the earlier '70s or in the later period of the 2000s. In other words, women of the '80s and early '90s were more bloodthirsty than men have been in the past decade. Remember Ellen Ripley and Pat Benatar? What so-called male actor or singer of recent years could match them, let alone top them? And similarly for the other contrasts. (Liberals and conservatives are those who are either the middle or nearly-moderate members, not even the extreme members.)

These graphs also make it clear that differences between demographic groups are smaller than differences between people from one time period vs. another. Compare the distance between the red and blue lines -- it's not as large as the swings up and down of either line over time. Back in the '80s, even self-described liberals were out for criminal blood -- they couldn't ignore the problem by that point. And over the past 15 years, even self-described conservatives have abandoned their guard posts in the war on crime, believing that since the problem seems to be solving itself, why stand watch to the same degree as before?

Because differences in the zeitgeist of two periods is so much more powerful at explaining differences in attitudes than are differences in demographic factors, social scientists need to pay attention to when a study was done. Lumping them all together will erase what could be substantial variation across the cycle of violence. That might explain why one study's results are inconsistent with those of another -- one might have been from rising-crime times, and the other from falling-crime times. That induces a strong shift in our psychology, so it must be taken into account.

It also shows why people form stronger and longer-lasting communities based on nostalgia than on political views, sex, etc. What time period you prefer creates much deeper cuts between Us and Them, as opposed to men vs. women or liberals vs. conservatives. For a Reagan-sympathizing conservative male of today, a mainstream liberal chick who time-traveled from 1985 would be great fun to hang out with and a lot easier to identify with than his fellow conservative males from 2011. Partisan splits that would have seemed unbridgeable at the time now look puny compared to the gulf separating people of one era from those of another.