To get a little more quantitative in the claims I've made about people's mindsets changing when the crime rate starts soaring or plummeting, let's look at how prevalent certain themes are in popular culture, which responds to audience demand of the day.

I'm only looking at song titles, not the entire lyrics because I don't have a lyrics database, but I can go through titles easily. The songs are those that hit #1 on the Billboard Hot 100 during a given year. This understates the prevalence since it only sees the tip of the iceberg; it sets a convenient threshold so we can compare similar cases across time, instead of cherry-picking songs to confirm our hunch.

My prevalence index is the sum of the number of songs that feature the theme in their title, and this sum is weighted by how many weeks the whole block of songs stayed at #1. The more songs there were, and the longer the whole group were topping the charts, the more in-the-air the themes of their titles were. *

The crime rate began increasing in 1959, peaked in 1992, and has been falling since. The Billboard data begin in 1959, so they allow us to see what happened during the rising-crime and falling-crime periods both. There are earlier Billboard data, but they had three separate precursors to the Hot 100. If I can figure out which is the closest to the Hot 100, if any is, I might go back and look at those to see what went on during the falling-crime period of the 1940s and most of the '50s.

This will be a continuing series, whenever I get time to flip through the lists. To start off, here are graphs showing the prevalence of religious themes, the theme of love in general or the abstract, and more concrete images of love. 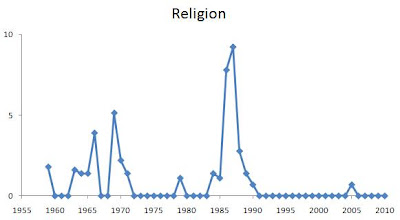 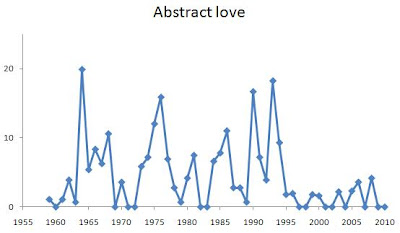 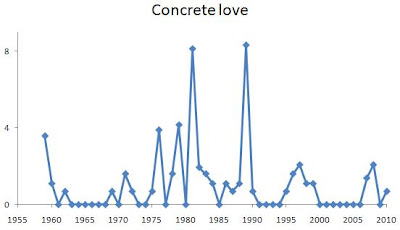 For religion, I included words dealing with man's relation to higher powers, rituals, religious buildings, and so on, whether Christian, Hare Krishna, pagan, or whatever. I excluded lesser supernatural beings like angels, genies, ghosts, as well as magic, which I might look at later.

The profound secularization of the 1990s and 2000s is reflected in the near total lack of song titles with religious themes, with the sole exception of "Inside Your Heaven" from 2005, which only lasted one week. This provides one hint among many that the so-called family values revolution, or the push for family-friendly entertainment, that exploded during the past 20 years has had little to do with religion or morality at all, and more to do with helicopter parents trying to shelter their kids from any issue of consequence to mankind. Just throw them on the treadmill of leveling up their Pokemon creatures, and they'll never have to learn about good vs. evil, the profane vs. the sacred, and so on.

For abstract love, I included any variant on "love," so sometimes it is a bit more concrete (like "I Wanna Love You"), but overall it shows how common the general theme of love has been. There's a clear increase during rising-crime times, notwithstanding random ups and downs, and there is no clear peak year. It even lasts a few years after the high-point of crime, peaking in 1993 and still hanging around in '94. From 1995 through 2010, the theme is still there -- it's one of the most common in pop music -- but at far lower levels than during rising-crime times. Kids have so little passion these days, especially in the relations between boys and girls, which are more at-a-distance, emotionally shallow, and understood as more of a contract than an involuntary attraction and mental possession. It's just like the 1940s and '50s in that way.

For concrete love, I included the more direct images of "eyes," "kiss," and "heart" (and their variants). Others could be added, but these ones are more charged than "hands," "arms," etc. Again there's an increase during rising-crime times, perhaps only during the apocalyptic second half. The peak years are 1981, which had "Kiss on My List," "Bette Davis Eyes," and "Private Eyes," and 1989, which had "Two Hearts," "Lost In Your Eyes," "Cold Hearted," and "Listen to Your Heart."

Nothing focuses the mind on flesh and organs quite like the belief that the world won't last much longer. This same pattern shows up in horror movies. Note that this greater emphasis on the material fabric of the body does not mean that the culture was less focused on the spiritual or supernatural, since I've shown earlier that rising-crime times make us dwell on those topics as well. The human mind is Cartesian, seeing people as made up of a material body and an immaterial spirit. So soaring violence levels train our minds on the constitution of human beings as a whole -- both matter and spirit.

The drop-off during falling-crime times is pretty dramatic, although there are a few songs that mention kissing in the title. Just listening to my albums (almost all from rising-crime times), it seems like every other one has a song with "eyes" in the title, whether or not they hit #1. "Angel Eyes," "Eyes Without a Face," "All Eyes," "Somebody's Eyes," "Heaven In Your Eyes," "Prisoner of Your Eyes," "World in My Eyes," and others. Since people started closing themselves off from others around 15 to 20 years ago, they don't make a deep enough of a connection with other people to take particular note of their eyes.

I've mentioned before how young people don't even make eye-contact when they dance, preferring the standing lapdance on the rare occasions when boy and girl actually do dance instead of hiding in their same-sex circle. Now that everyone's a prude, kissing is down -- except among fat, ugly people in public (ever notice?). And talking abour your "heart" or someone else's requires you to let your guard down for a moment, which everyone is either afraid to do or, more commonly, snickers at the very idea as though their life were one endless episode of Seinfeld or Family Guy.

That's it for now. Upcoming posts will look at the themes of life and death, kinship, the weather and natural world, color terms, materialism, and whatever else would be relevant to earlier claims I've made.

* Specifically, each year's index is S*log(1+T), where S is the sum of the number of distinct songs, and T is the total time in weeks that this set of songs were at #1. I've log-transformed time because that's how people perceive it when judging how long a cultural trend has lasted -- there's a week, several weeks, several months, a year, several years, etc.

The index gives greater weight to the number of different songs (the index increases linearly with this variable), compared to the total time they are hits (the index shows diminishing marginal returns with this one). The reason is that I'm trying to capture how widespread the average listener would have perceived the theme -- so 5 songs each at the top for 1 week would be seen as a sign of much broader prevalence of the theme than 1 song at the top for 5 weeks. Listeners mostly look at how widespread the theme is across various individuals, and less so how long-lasting it is over time.