Did the AIDS scare push gays toward lower promiscuity?

There's a lot of inconsistency in the estimates of how promiscuous gay men are -- are they more in the direction of the librarian who wears a sweater vest or the disco dancer who blows random guys in public toilets? Much of those apparent contradictions are almost surely due to differences in when the estimates were taken: before AIDS hit, gays must have felt little restraint, whereas in the wake of their (not our) AIDS epidemic they must have taken more precautions.

The General Social Survey asked questions about how many partners you had in the past year, and what their sex was, from 1988 through 2010. So unfortunately the data stream does not go back into the pre-AIDS era. However, for a good qualitative lit review, see this post by Ray Sawhill / Michael Blowhard. At least we can see what happened in the post-AIDS period. 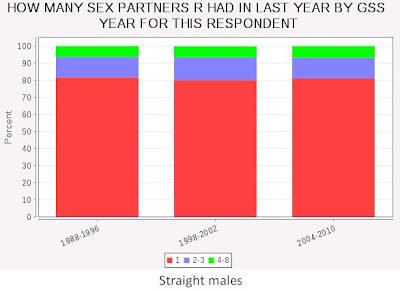 No change whatsoever, during this time anyway -- we're mostly seeing the more tame 1990s and 2000s, remember, not the '60s through the '80s. I lumped the years into these three groups in order to give decent sample sizes for the homosexuals, since they are very rare in any single year. Here is their pattern over this same time: 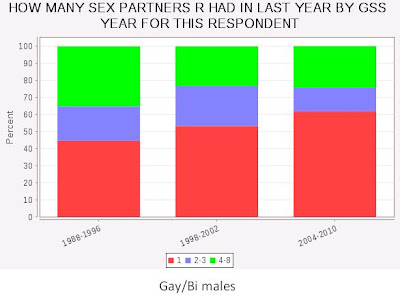 Among gays, monogamy rose from 45% in the late '80s through the mid '90s, to 62% by the later 2000s. Having 2 or 3 partners dropped from 20% to 14% over that time, while having 4+ partners dropped from 35% to 24%. Even these recent numbers are still more promiscuous than those of their straight counterparts, but they do show a shift away from the heyday of San Francisco bath-houses.

Since no change in any direction is observed among straights, this shift among gays obviously reflects their fear of getting AIDS. It cannot reflect society's greater acceptance of homosexuality, as that would free them up to greater promiscuity, all else equal. But all else was not equal, and evidently the fear of getting AIDS outweighed the effect of growing social tolerance that would let them do whatever they pleased.

So despite all the whining of their more vocal members about how Reagan allowed the AIDS epidemic to happen, the gays' own lifestyle changes show that they believed that they themselves were to blame. If they had thought it was all a matter of public policy, tolerance, bla bla bla, then they would have acted like fat people and kept eating the same junk diet while shouting at the gummint to gimme more medicine for my diabetes. It's not as though they've fully dialed down their promiscuity to straight levels, but at least they've taken more personal responsibility in their fight against AIDS.