* Turtle Mountain has expanded its coconut milk product line to include -- milk! I've only tried the unsweetened kind, since the others have too much sugar for something you'll drink regularly. As expected, it tastes pretty bland, but not offensive, just like unsweetened soy milk, unsweetened almond milk, etc. But because it has more fat (5 g per serving, and all of it saturated), it has a richer feel. You can sprinkle a tiny bit of splenda in, and it'll be fine -- even better with a tablespoon and a half of unsweetened cocoa powder.

It's great for a quick energy boost -- it goes down much easier than my old habit of eating a tablespoon of solid coconut oil.

I think the recent explosion of coconut oil / milk products is going to be the wedge that allows people to eat lots of fat, especially saturated fat, without worrying about what a bunch of know-nothing experts tell them. I mean, it's from a coconut, and if you're against coconuts, you're just some kind of anti-fruit-and-vegetable, anti-tropical racist. It's silly that we can't get people to eat more fat by promoting butter, which has less saturated fat than coconut oil, but butter is from an animal and made by evil white people. Hey, whatever works now, works now.

The entire side of the milk carton explains why the fats in coconut milk are good -- actually, it refers to them as medium-chain fatty acids and the sterile acronym MCFAs, which don't sound as harmful as the plain word "fat." When have you ever seen a low-fat or non-fat product refer to specific fatty acids like a biochem textbook would, and list their benefits? The carton's design is eye-catching, so hopefully people will be intrigued enough to give it a look and be somewhat deprogrammed of their anti-fat prejudice.

Turtle Mountain has also released a bunch of coconut milk yoghurt flavors. I didn't bother trying any because they've got around 17 g of sugar per little container -- if I want that much sugar, I'll buy some of their ice cream instead.

* Speaking of yoghurt, despite being lactose-intolerant, I took a risk and bought some cow's milk yoghurt, since I read that it isn't so bad. I went with the super-fat Greek yoghurt by Fage, the only type that had any fat at all. (At least frosting has sugar and fat -- non-fat yoghurt is worse than frosting.) I had two big bowls in one day, both yesterday and today, and I've had zero problems. Thank fucking god.

And just as I noticed when I started eating cheese again, I had a zipper-bursting boner for hours last night, and my libido's been on turbo today as well, like I'm right back in high school. This suggests that there's something in milk that's responsible, not just in cheese. High dairy consumption is probably responsible for French and Swedish guys having the biggest dicks in Europe, and the English having nearly the smallest, as well as for East Asians having notoriously small ones. They need to eat more dead animals and animal products instead of all those damned vegetables and grains, and they might one day produce a porn star.

* The Freshman 15 has become an area of academic research -- search PubMed for "freshman 15." First, it shouldn't surprise me, but it's astonishing how socially retarded researchers are -- they actually took the phrase literally and decided to test whether or not the "gain 15 pounds" idea was truth or fiction.

Goddamit, the word "fifteen" was chosen because we don't want numbers that don't end in 0 or 5, and for prosody and plausibility. "Freshman 5" doesn't sound plausible to us -- the very perceptible changes seem greater to us. Plus it sounds like a superhero group, or a bad boy band. And "freshman 50" is too implausible. 25, 35, etc., don't roll off the tongue like 15 does. What is it about geeks and interpreting everything literally? "Freshman 15" simply means "gaining a noticeable amount of weight or body fat during your freshman year."

And all of these studies do show that, if not 15 pounds. It's probably between 5 to 10 pounds, but that's still about what we've gained on average during the obesity epidemic -- and a decent change in the mean will have even more pronounced effects in the tails, where we're looking at the real tubbos. Moreover, some of the abstracts show that less than half of the students weighed at the beginning followed through at the end of the year -- I wonder what quality these drop-outs may have had. Obviously the ones who bloated out during the year are more embarrassed to be weighed again, so in such cases, the weight gain is an underestimate.

Also, when the studies' abstracts compare college students' weight gain to weight gain in other adult groups, they always say it's much greater. So, just as everyone suspected, there's something particular to college life that makes you huge. Therefore, the freshman 15 is not a myth -- it was totally obvious.

Just browsing through the abstracts, none of the studies bothered to measure whether macronutrient intake affected weight gain -- for example, did higher carb consumption predict greater body fat? However, here's a nice anecdote from an NYT article on the freshman 15:

And a few students do gain more than 15 pounds. Zoe Hall, Ms. Oz's best friend from childhood, gained 20 pounds during her first year at Vanderbilt University in Nashville because her class schedule conflicted with the opening hours of the university dining hall and she subsisted mostly on candy, frosted animal crackers, bagels and also late-night pizza delivered to her dorm room, she said.

You get one guess about what the boldfaced foods have in common, foods that caused a girl in the bloom of youth to gain 20 pounds in 9 months.

Here's another good NYT article on how much cereal college students eat. Most of their milk will be skim, and thus have lots of sugar and hardly any fat. And the cereal itself is of course empty carbs, both the grain base and the sugar coating. If you ever doubted that high carb consumption causes cellular starvation and a craving for more, look at the accompanying picture: 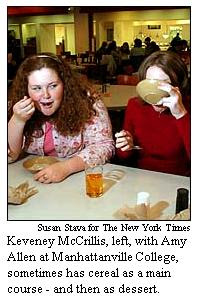 That's not counting the gallons of fruit juice, soda, bagels, bread, pasta, fries, the cornucopia of deserts, etc. You don't see college students tearing into a marbled steak, then salmon or tuna drowned in butter, followed by a plate of eggs with melted cheese on top, all washed down with whole milk or water. Obviously fat has nothing to do with the freshman 15 because they're hardly getting any of it, aside from the odd bowl of ice cream.

If you think back to before you left for college, you probably wanted as much sugar and carbs as any other teenager, but you at least had one meal prepared by your parents that had a decent amount of fat and protein. The junk you ate for breakfast, the froo-froo school lunches, and whatever you snacked on after school until bedtime was bad, but there was a respite during dinner: some kind of dead animal, a butter dish, few fruits, lots of vegetables, and a bit of starch (say, one dinner roll). Milk, water, or unsweetened iced tea to drink, not soda -- and definitely no alcohol, and hence no beer belly.

As girlfriend material, college girls are a huge let-down compared to teenagers in many ways, and this is yet another. However poor their diet may be in high school, it just goes to shit in college, and their appearance and behavior show it right away. Their face looks puffy, their eyes look smaller, they get thunder thighs, not to mention getting moodier and bitchier. It only gets worse when they go off meal plan -- then they definitely aren't getting any protein or fat, since preparing meat or fish is something they aren't interested in. They're basically living off of microwave pizza, starchy soups, chips, ice cream, candy or cookies, and soda. If they're well-to-do, they may be buying the organic version of this trailer trash food, but still.

This protective effect of living with your parents, as a youngster, shows up in binge drinking too: commuter students who live at home are less likely to drink, and drink less when they do, compared to students who live in dorms, even after adjusting for just about any demographic variable. Parents don't need to be breathing down their kid's neck -- the kid just senses that home isn't the place where they should try all sorts of risky behavior. These barriers of course make doing it so much more exciting -- having to orchestrate a party when someone's parents are gone, or stealing away in your car to make out, rather than hosting danger-free dorm parties or unceremoniously leaving a rubber band on your doorknob to tell your roommate that he's being sexiled tonight.

Getting more fun out of getting into less trouble -- another reason to make your kids live at home when they're in college.