Steve Sailer recently asked people who can count to analyze movie statistics. I've done some of this already -- see here for analyses showing that under-18 girls, compared to older women, are more likely to dig Alfred Hitchcock, to love good horror movies, and to hate stupid chick flicks.

Now, instead of comparing females of various ages, I'll compare males and females of the same age to figure out the male - female gap in tastes, and then compare this gap across young vs. old age groups. This will provide evidence for what many guys already suspect -- that, while men and women both get more boring as they age, women become dull at a much faster rate.

At age 15 or 20, a girl is just slightly less enthusiastic about going for a ride on the bumper cars than a guy. But at age 45 or 50, the woman will resolutely refuse, while the guy after some arm-twisting will say, "OK, what the heck!" Also, a 45 or 50 y.o. father will happily be athletic with his son -- tossing around the football, or whatever -- while the 45 to 50 y.o. mother will wimp out when her daughter wants a partner to practice cheerleading. (Except for those psycho "cheer moms.")

The data come from the IMDb top ranking horror movies, since appreciating these is a good sign of your willingness to have fun, even if it means getting scared. (Same with athletics -- you're having fun at the risk of getting winded, spraining something, etc.) I simply took the difference between the average male rating and average female rating, for both the under-18 and the 45+ age groups. I only used a movie if each age/sex group had at least 40 votes, as a rough guard against small sample sizes. This left 25 of the original 50 -- there are lots of movies that rank highly due to a small-yet-big-enough minority hyping them up. Quite a few obscure Japanese and Chinese ones, or US ones from the 30s or 40s, for example, and yet no Nightmare on Elm Street?

Anyway, here are the distributions of male-female gaps, first for the under-18 group and then for the 45+ group. For those who failed the data analysis questions on the SAT, positive values here mean males liked it more than females, while negative values mean females like it more. I've made the bins in sizes of 10, and each is labeled with the mid-point. So, the bar for an M-F gap of "5" includes any M-F gap from 0 to 9, "15" includes any gap from 10 to 19, etc. Update: to clarify, all of the original scores have been multiplied by 10 in order to get rid of decimal points, so that the new scale is 0 to 100. Thus, a difference of 5 here is a difference of 0.5 on the original 0 to 10 scale. 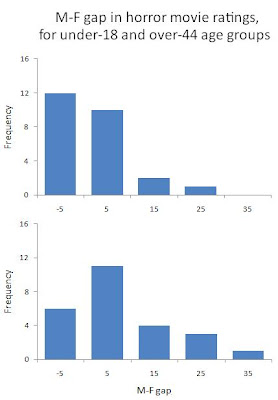 As you can see, among teenagers the most typical sex gap is actually one that favors females, and each degree of male-favoring gap is less and less likely. The median gap value is 0 -- i.e., no sex difference. Although they may not be as likely to manifest their drives violently, teenage girls are about as thrill-seeking as boys. This is no surprise to anyone who has spent time supervising them, especially those who they have tried to seduce. However, among 45+ women, the most likely gap is one that favors males, and the median M-F gap is 4. 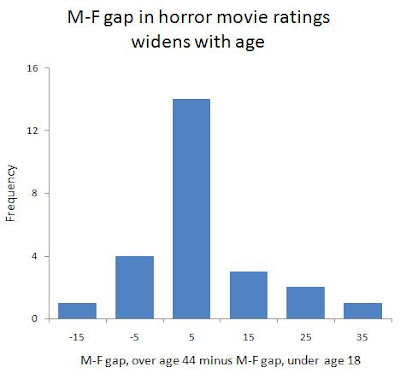 Again, the most common change in the gap is positive, and the median is 4. Indeed, only 5 of the 25 movies showed a narrowing of the sex gap at later ages -- most showed women becoming even more of a wet blanket at later ages.

This supports what every guy suspects -- that women turn boring faster than men -- but it may not be something they thought was true. After all, the media portray middle age as a time when women are so eager to do fun and exciting things, while the guy is just laying around on the couch spoiling her attempt at fun. Of course, there's nothing fun about zooming off to Crate & Barrel to stare for three hours at napkins, or spending an evening in some overhyped ristorante in a vain attempt to look sophisticated and authentic.

Anything that actually gets the blood going -- athletics, amusement games or rides, fucking -- will only get a response of, "Ohhhh no, I don't have any time for that." When she was younger, she would've jumped up and shouted, "i mean, omigod, i thought you'd never ask!" So, now that the weather's getting better, there's no better time to find someone incredibly younger than you to get the most out of things. True -- both young and old females come with their share of inanity, but I sure know which type of silliness I'd rather be subjected to.