Jane Brody is a liar

I'll put up a more detailed debunking of NYT health shaman Jane Brody's article on the purported risks of eating red meat, probably on Sunday or Monday at GNXP.com, with lots more graphs over broader time periods. In the opening paragraph, the better to frighten everyone, she claims that "Meat consumption has more than doubled in the United States in the last 50 years." Since the article is about the dangers of red meat, the reader is left to infer that this doubling refers to the allegedly dangerous red meat.

Sure it has, you dingbat. That's all I see today -- people gorging themselves on steaks, ground beef, veal, and lamb. She cites no source at all for this claim -- I mean, she's only a journalist.

Turning to reality, here is a look at how consumption of red meat (beef) vs. white meat (chicken) has changed from 1985 to 2006, the most intense phase of the anti-fat hysteria: 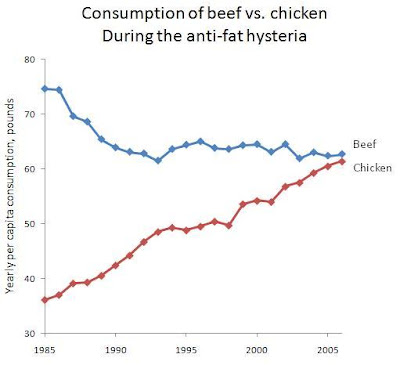 Beef consumption dropped from 75 pounds per year per capita in 1985 to 63 pounds in 2006, a decline of 16% in only 20 years. This is actual consumption, not just supply. There are data for all red meat and all poultry, but the change in their values are almost entirely due to changes in the specific foods of beef and chicken (hardly anyone was eating lamb or veal in 1985 to begin with). I pieced the data together from several editions of the USDA's annual Agricultural Statistics, and so could you if you had a free afternoon.

There are also data on supply going back to 1909. These come from a single spreadsheet, one of many that are freely available at the USDA website. Here is the graph: 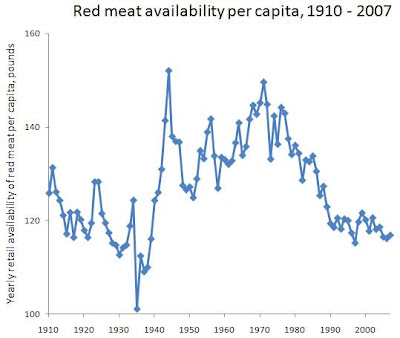 "In the last 50 years," there has been an increase and then a decrease, as opposed to what Brody implies as a steady increase when she refers to a "doubling." Even there, she is wrong. Starting 50 years ago, in 1959, the retail availability per capita per year of red meat was 134 pounds, vs. 117 pounds in 2007, a decline of 13%. But if we ignore the meaningless time period of "the last 50 years" and instead focus on the period of mainstream anti-fat hysteria, we find a 22% decline from the peak in 1971 of 150 pounds to 117 pounds in 2007.

In short, Jane Brody is a bald-faced liar who couldn't be bothered to spend a single afternoon to check her facts using these bewildering new technologies called the internet and Microsoft Excel. Even worse is that she lacks any common sense, which should have set off her bullshit detector after hearing from some other moron that red meat consumption has "more than doubled" ever since President Eisenhower's heart attacks scared everyone into abandoning red meat.

How lazy, gullible, and innumerate do you have to be to get a lifelong appointment as a health & nutrition gossip at the newspaper of record?

Update: it occurs to me that Brody is one of those people who don't understand rates. Like, maybe meat consumption is going up just because there are a lot more people in the US now than 50 years ago. Obviously the useful statistic is per capita consumption. Still, here is the total availability of red meat, not the per capita availability: 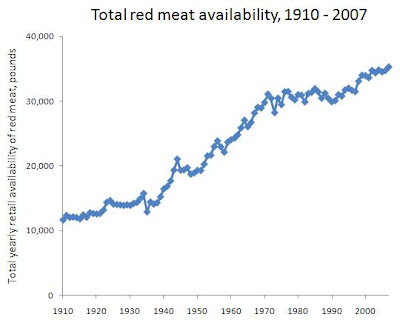 A commenter suggests that she was referring to all meat, not just red meat, and total rather than per capita consumption. If we use the USDA's data on all meat -- red meat plus chicken -- and use total rather than per capita values, then there was a doubling from 1962 to 2007. So, it's a lie by omission -- the headline and the content of the article are about the alleged dangers of red meat, not simply of meat. "Oh, did I forget to mention I was referring to total consumption of all meat? What would have ever made you think I was talking about how much red meat the average person eats?" She also lies by omission in not saying what the pattern for red meat, the relevant meat for her article, looks like -- a sharp decline.

Jane Brody got a B.S. in biochemistry from Cornell in 1962, before the anti-fat hysteria. Since then, her starving agricultural peasant diet has clearly robbed her of whatever reasoning faculties she had as a young girl. It sure hasn't helped her cholesterol levels -- see here, and a funnier response here.