Why did eggs partially survive the anti-fat witch hunt?

Let's turn from data on the availability of certain foods to actual consumption patterns, which I've pieced together from various years of the USDA's Agricultural Statistics. We all know that sometime in the late 1970s or early '80s, the anti-fat hysteria took off. Some foods show a steady decline from the mid-1980s up through 2006, and I'll show those not too surprising graphs later. But take a look at how egg consumption has changed since 1985 (the earliest year of the data): 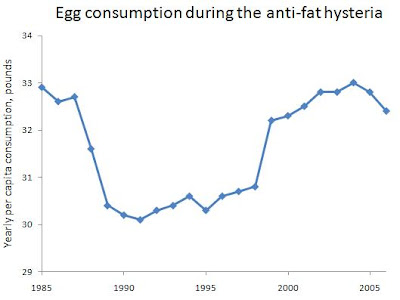 At first, there's the predictable decline. Then in the early '90s, it creeps slowly upward, and shoots up from 1999 to 2004, with a modest decline afterward. This is not like other foods that were targeted as evil by the fat-haters. What's going on?

It's true that eggs may have enjoyed a rebirth (or whatever it's called when they were never born in the first place), due to the fashion for low-carb diets during this time period. Here is a graph of the NYT's coverage of the Atkins Diet and low-carb things: 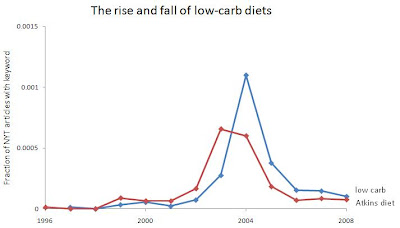 Still, if that's the reason, why didn't any of the other low-carb / high-protein / high-fat foods also see a reversal of their declines? There's no upsurge during this time for whole milk, beef, or animal fats (butter, lard, etc.). The first two decline steadily, while the third stays pretty flat (at a low level) from 1985 to 2006. There's something funny about eggs.

My guess is that since eggs come from chickens, they are protected by the halo of saintliness that we've bestowed on chickens -- what with their negligible fat, once skinned, their white meat, and so on. Chicken consumption has steadily increased from 1985 onward. On the other hand, milk and common animal fats come from cows, and that's where all that fat and saturated fat comes from -- we all know that stuff is going to kill you. (Just like it regularly killed off the Masai of Kenya, whose traditional diet consisted of red meat, whole milk, and cow's blood.) Because we've made a demon of the cow -- ironic, considering how India-emulating a lot of the anti-fat fruitcakes are -- its many dairy by-products are tainted by association.

As a final sidenote, for those who are somewhat lactose intolerant like me, and certainly if you're OK with dairy, I suggest junking yoghurt and using heavy whipping cream instead. Even the full-fat, unsweetened Greek yoghurt contains 7 g of sugars per serving. That's not a lot, but it's enough for me to notice a small spike in my insulin levels -- judging by the fatigue I've gotten while trying yoghurt again. I used to wake up rarin' to go after just 6 or 7 hours of sleep, while on yoghurt I easily slept 9, 10, or at worst 12 hours.

Heavy whipping cream is so rich that you won't need to use very much to cover a small portion of berries. It has less than 0.5 g of sugars per tablespoon, yet it has 6 g of fat, 4 g of which is saturated. Yum yum. The lactose content is a bit above cheese and a bit below yoghurt, so if you can have yoghurt, you can surely substitute this for it. It's been almost 3 hours since I had some, and I've had no problems. Next on my to-do list: Devon cream or clotted cream. I'll have to use a low-carb bread / muffin / scone, and fruit instead of jam to keep the sugar count down, but the pictures I've seen of cream tea have made me drool.