Just saw Adventureland this weekend, and I'll put up a review later today or tomorrow. Without giving anything away, a key source of conflict in the plot is the competition over the lead female character, Em, a recent college grad, who is fought over by the lead male character, James, also a recent college grad, and an older (30-something) rock guitarist / maintenance worker, Connell. So, there appears to be a dilemma that Em faces -- the smooth older guy vs. the more awkward guy her own age, who she relates to better.

In fact, the actress who plays Em was 17 when the movie was filmed, and her two suitors were 24 and 31. Even the "I get you" relationship between Em and James involves a 7-year age gap.

This is proof of what I've been saying forever at this blog -- that people exaggerate how great the social or psychological chasm will be when there's a substantial age gap. It's so tiny that no one watching this movie will notice it. Give two people the chance to bond (by shooting the shit at work, having similar music tastes, etc.), and it's no big deal.

Note that not only is the age gap 7 years, but what a 7 years -- she's not even old enough to be in college, and he's old enough to have graduated and started establishing himself for several years. He could easily be her high school English teacher. During the recent wave of anti-age-gap hysteria, highlighted by the TV news show "To Catch a Predator," we've forgotten how natural an affair like this is. Whether or not you favor such a relationship developing, you can't argue that it's coercive, based on a power imbalance, or unnatural.

Go watch Adventureland and you'll see how sweet a teenage / mid-20s couple can be. 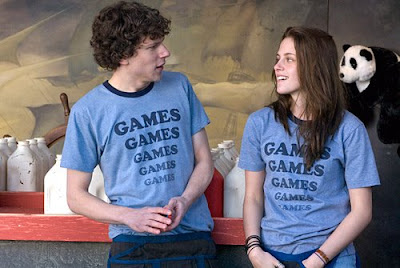