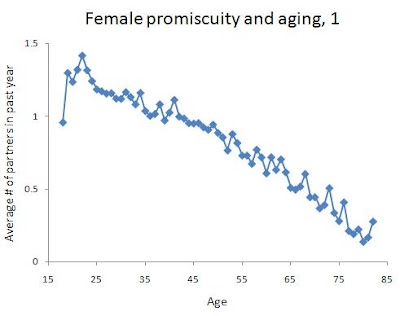 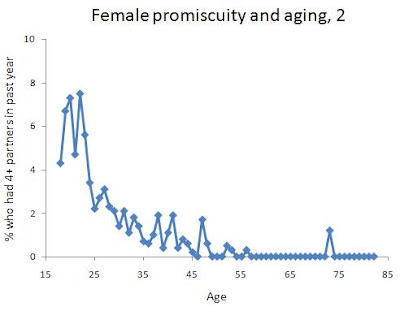 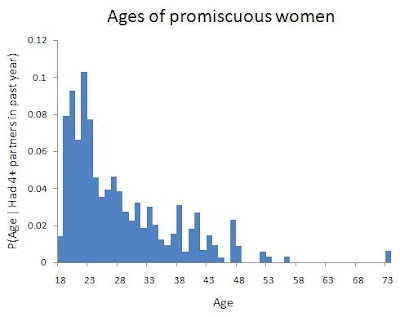 If we restrict the data to only unmarried women, the answer does not change. The only difference is that the decline in sluttiness is a bit slower, since these women are still on the market. There's a blip at age 31 in the "average partners" graph, but considering all the graphs together, 22 remains the answer. Here are the graphs for unmarried women: 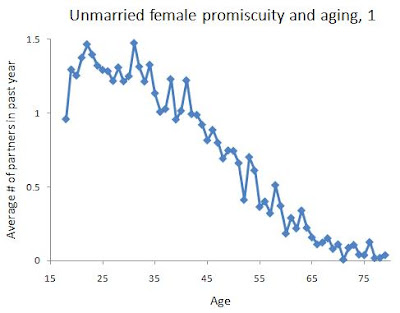 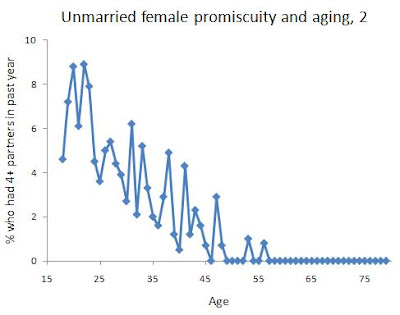 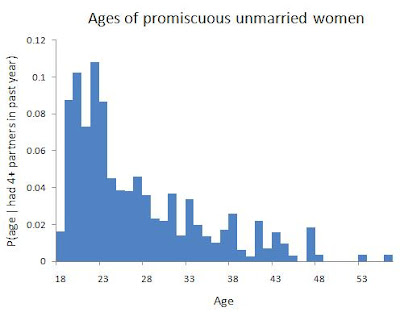 The GSS doesn't survey people under 18, but we can infer that sluttiness decreases as we look backward to age of puberty.

I've provided evidence on this blog that female sex-bomb-ness peaks at age 23 (see here and links therein). And if you've been here for longer than a week, you know I find girls younger than that very attractive too. The same is true for any red-blooded guy -- his guess won't be very far off from another, unless he's trying to curry favor with over-25 women. (Hint: they won't fuck you just because you repeatedly stood up for them, which only makes you look like a doormat.)

Females need to sample the pool of mates before they have a child, to ensure they don't have a loser's child. In developed countries this is around 25, maybe a little earlier in good times and a little later in bad times. So, they're going to be increasing slutty after puberty and up until a year before they tend to have their first kid. Their good looks at these ages are adaptations to help them play the field -- it would be tough to make the rounds if you were wrinkled, saggy, and slothlike. Their high levels of androgens during this time helps them have the more guy-like urges necessary to go out and make the rounds.

On a practical level, it's probably best to avoid marrying or investing seriously in a woman who's about 20 to 23, since they're the sluttiest and thus most likely to cheat on you. (I'll post another graph soon on how cheating varies across the lifespan -- 21 to 23 is a high point there too.) If you want a serious relationship with someone who's good-looking and not likely to sleep around, your best bet is teenagers, or if that's not possible, women in their mid-20s who happen to have aged very well.

When I noted that you need to keep watch over your young wife, the girl in that episode was about the age of peak sluttiness. Although 15 to 19 year-olds in a club will dirty dance with me or, at the most risque, spank my ass, a very quick progression to kissing and grabbing her thigh that's wrapped around my torso is just not going to happen (let alone while she asks her friends to take pictures of it). So, if you're too busy with other things to closely monitor your gf's or wife's behavior, investing in a teenager or mid-20s girl is ideal. A high school sweetheart may have a high libido, but compared to women in other good-looking age groups, she's too chaste to date around or betray you.