Liberals and feminists are supposed to transcend competitive status games, and value people for who they truly are, right? Yeah, just as soon as they start sending their kids to mediocre public schools, rather than one-up the neighbors in number of Ivy League decals on their car.

The General Social Survey asks people how important certain qualities are "for a child to learn to prepare him or her for life" -- basically, traits you want your kids to have: obedience, courteousness, etc. One is "to be well liked or popular." So let's see who really moves beyond popularity. Here is the percent of women who rated popularity the least important quality, by political orientation and whether or not they consider themselves feminists: 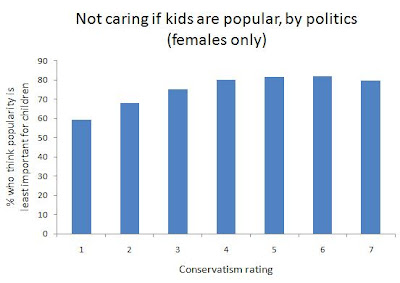 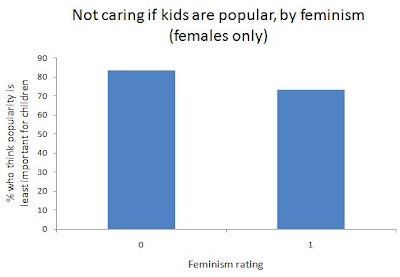 So, the more liberal and feminist a woman is, the more likely she is to value popularity -- i.e., high status or dominance -- in kids. Interestingly, men are also more likely than women to value popularity in kids. * So we have yet another case of liberal, feminist women resembling men. You can imagine what it would be like to have one as the mother of your kids, constantly breathing down their -- and your -- necks to make sure they dominate everything. Little do they know that parental pressure won't make a kid any more popular -- although if your friends and schoolmates found out that your mom's a fucking psycho, it could certainly lower your popularity.

Final judgement: good for a screw or two, but after that, someone else can keep 'em.

* Data not shown, as they say, but easy to check for yourself.