While some may be able to stomach the moral superiority preening contests that are satirized on Stuff White People Like, I have to control the urge to choke the person. You can't even say, "God, you're full of shit" -- at least to those who you're forced to be around regularly. You have to pretend that you're joking, and even then most people will interpret it as one of those faggy meta ironic statements.

Having to tolerate others grates on the nerves, but to avoid SWPL, do we hang out with Blacks instead of Whites, men instead of women, young instead of old?

What nearly no one discusses about Christian Lander's satire is the effect of age: the SWPL group is made up mostly of people aged 23 to 63. After that, people enter their brutally honest, cranky oldperson stage. They no longer hobnob with large parts of their social group, and so don't need to publicly pretend that most of them aren't utter fools. During the second or third year of college, students begin to dabble in SWPL stuff, but it's really after they graduate and have to join the world of 20 - 50-somethings that they preoccupy over whether the rice at their dinner party is organic whole grain or not.

Teenagers live in a world entirely divorced from that. Adults are sort of in the background producing the music they listen to and building the malls they hang out in, but they never interact with any of them. They have their own savage status competitions, but theirs highlight how arbitrary the contest is -- your group wears baggy jeans, but we wear skinny jeans, so you suck. The SWPL crowd, though, believes there's a deeper moral war being fought on the battlefield of things that don't matter. If we don't make our city more bike-friendly, Fascism will win!

So, here are some data to back this up. I didn't need them, but most people have probably forgotten the difference between being in high school vs. college, as far as having dopey views goes -- even though it's incredibly obvious. First, here is how the personality trait Openness to Experience changes across the lifespan *: 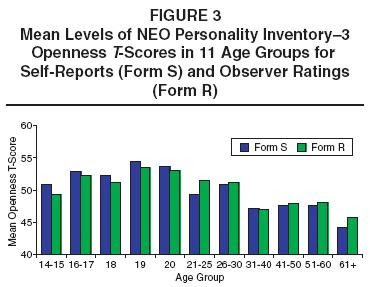 Openness increases during adolescence, peaks in college, and declines after. The peak is at age 19 -- I guess they don't call it "sophomoric" for nothing. That's the year I got really into leftist student activism and anarchism. Makes me long for high school, when no one gave a shit about that stuff. During the 1998 election, I wore an authentic Nixon / Agnew pin on my field jacket -- not because I knew anything about them, or cared, but just to be obnoxious and cool.

Speaking of raising awareness, when does sympathy with this crap peak? I checked an online petition site for ones that included the signers' ages. Two are about SWPL causes -- Help Stop Animal Abuse! and Save the Madagascar Rain Forest -- and the third is a control case, Lower Legal Drinking Age. Here are box plots of the signers' ages for each: 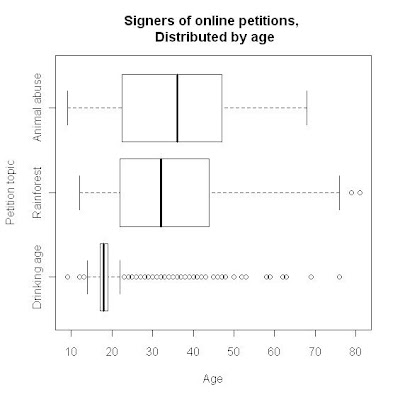 The median signer of the two Green petitions is in their early-mid 30s, and the middle half of them are 20-somethings through 40-somethings. Only about a quarter of them are 21 or under. Just to show that this isn't because young people don't visit that website, or don't feel like signing petitions, the plot for signers of the "lower the drinking age" petition clearly shows interest among people in their late teens. And the number of signers is much larger in this case -- 606, compared to 249 and 371 for the "rainforest" and "animal abuse" petitions.

And here are histograms, which are more fine-grained but don't all neatly fit on the same graph. Each bin has 5 years, centered on years ending in 3 or 8. 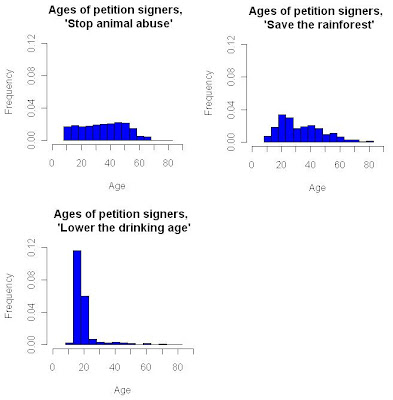 No surprise that almost all of the "lower the drinking age" people are drawn from such a tiny age range, compared to the other two causes. The two high bars in the "rainforest" graph represent ages 21 - 30. Signers of the "animal abuse" petition are nearly uniformly distributed by age, although there is an increasing trend.

So, when an issue really does appeal to them, adolescents are all over it. It's just that the issues they care about -- like being able to get drunk sooner -- aren't about showing off how morally superior they are. The poor bastards have the idea that once you graduate high school, you putz around for a few years, nothing too different, and then you become a full adult. And they just want to get to that part quickly, as I showed before. Ah, but first they have to waste their 20s "finding themselves," in order to have more ammo in the preening contests:

"Oh, you found yourself in Sydney? That's not too bad -- for me it was Tanzania, but I guess Australia's OK too. I just don't get how you tolerated all those tourists, though!"

Maybe for fun sometime I'll ask one of the girls at the teen dance club how much she's looking forward to finding herself during her 20s. "finding myself? ummmm... idk, sounds kinda gay. but i can't WAIT to get my own place and my own carrr!"

So, while individual females in their 20s and beyond may reject the moralistic status contests, as a group the 20 - 60 year-olds are the worst. Sure, teenagers have their own silly status contests -- just like you do. (No one cares that you know who the "it pianist" is this year, and that you were like totally into them before everyone else found out about them in the New York Times.) Every group of people is annoying, but some are less so -- don't let the best be the enemy of the good. I'll take a skinny vs. baggy jeans debate over a tirade about why iodized salt is evil any day.