One feature of the mid-late '90s that I've always found bizarre was the brief rise of Asian girls as sex symbols, despite having no ass or breasts, flat and fat faces, and a cold demeanor (Lucy Liu on Ally McBeal). This was an on-the-ground phenomenon too, with guys saying things like, "Dude, did you see her roommate? She's ASIAN!" Other aspects of female sex symbols -- the ones that aren't so central to her value -- go through fashion cycles, such as the recent domination of the ass over the boobs. 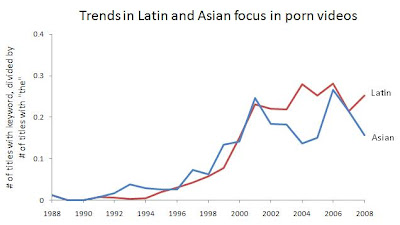 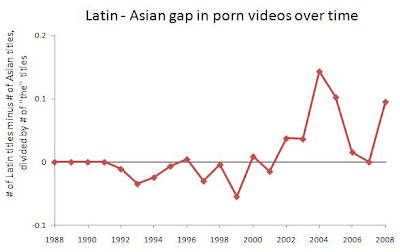 And now for trends in unusual ages (young or old): 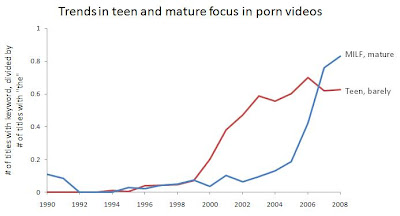 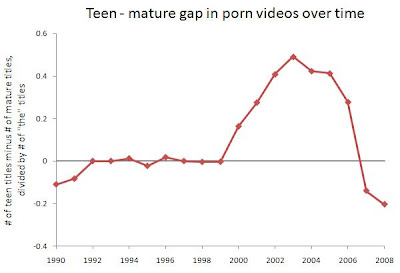 Teens became a popular niche in 2000, and MILFs in 2003 or '04. Looks like teens have stalled out as a niche, while MILFs are still rising in popularity. There wasn't much difference between the two age groups throughout the '90s, but from 2000 to '06, teens blew MILFs out of the water, peaking in '03. For the past two years, though, MILFs have been a stronger niche than teenagers -- a sure sign that civilization is doomed.

Lastly, the trends in focus on the ass or breasts: 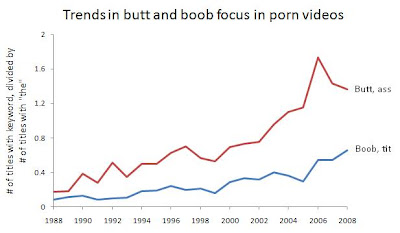 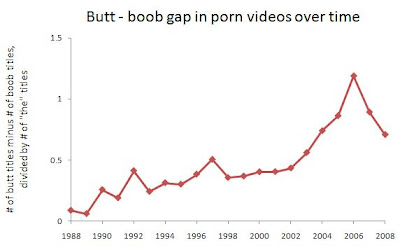 These two increase throughout the '90s, but at the turn of the millennium both increase even faster. It seems that the late '90s was when porn changed from movies with acting to an unconnected series of scenes on the same theme. Booty movies have always been more popular than boob movies, which I wouldn't have guessed would be true before 2000. Either there are more assmen than boobmen, or even boobmen become more interested in asses when they need to get the job done. The ass - boob gap was greatest in 2006, but has declined somewhat in the past two years. Has the booty bubble burst? Let's hope not. But Congress can always break it off a piece of its big stimulus package to keep it floating.

Guys like to think that they're largely immune to fashion changes in female sex symbols, and to a great extent, we're right -- short of driving a spike through our brain, you can't convince us that Sarah Jessica Parker is sexy. But for traits that don't matter so much, we may go along with whatever's cool at the moment, like a J-Lo booty. I've been a fan of that shape ever since my first girlfriend in sixth grade, a Central American with a full rump and the largest breasts in the entire middle school. But for others, it may be like the Asian craze of the mid-late '90s.