I thought of starting this with "no surprise," but that's only true for girls who live in bars -- we already think of them as promiscuous. A lot of people, though, are skeptical that guys who go to bars a lot actually end up in bed with more girls. The General Social Survey asks people how often they go out to bars, and how many sex partners they had in the past year. Here's a graph of the relationship for males and females (the pattern is the same when only unmarried people are counted): 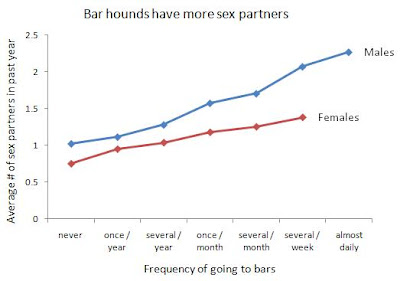 Sure enough, female bar flies are sluts. (I left out the "goes almost daily" group because they were a small sample compared to the rest.) That's yet another reason to approach "the new girl" at your favorite clubs and bars -- aside from novelty value, if you rarely see her there, she probably doesn't frequent bars so often, and won't cheat on you. Unless she goes to every single bar in the area, coming back to one only after a month's cycle -- but you should be able to tell which case she is.

And in case you were skeptical, guys who go out to bars a lot do bed more women. Really, where else would you go to boost the notch count? Maybe the skepticism is based on the image of the group of doofuses who go out frequently yet do all the wrong things. (See any TGI Fridays commercial.) And yet, as goofy as these guys may be, at least they're out and about playing some kind of numbers game -- they've got more promise than if they'd stayed home the entire year.

Correlation isn't causation, as they say, so it could just be that extraverted people both go out more and are better at persuading others into the bedroom. Still, don't forget what Woody Allen said: "Eighty percent of success is showing up."

Update: Instead of looking at average number of partners, here is the percent who had 3+ and 4+ partners in the past year, by how often they go to bars. 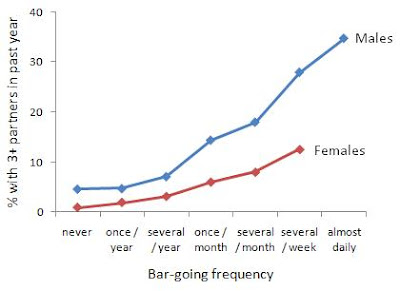 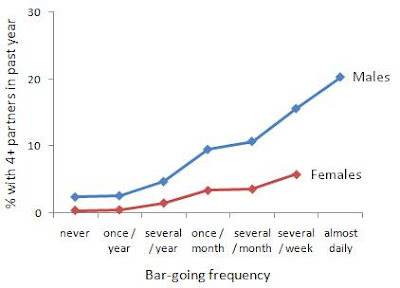