The temptation of Saint Agnostic 4: Hannah

At age 24, I'd tutored a few teenagers after graduating college, and had a very lightly flirtatious rapport with one a year earlier, but nothing more. Hannah, 17, was the first one to come right at me, and so the first to re-open my eyes to the nature of adolescent female sexuality. You're aware of it when you're their age, but as the memories fade after college, you imagine them as naive, helpless, passive, and so on. (See here for a reminder of their turbo-charged libidos. Ads NSFW.)

During her junior year of high school -- when girls are at the summit of their girlfriend appeal -- I had just begun working at the place Hannah went to for help with Algebra II. Usually a math-only guy was there to work with her, but several times she had to fend for herself. I remember hearing one of her tutors struggling to recall polynomial long division. I let this tutor go on for a little bit, just because I delight in seeing people paralyzed by their math insecurity, and then stepped in to show Hannah how it works.

It's a very tedious process, so I was writing down quite a bit as I was sitting next to her. After every couple of steps, she interrupted with, "Oh wait, you mean like this?" while moving her pencil far outside her personal space, so that her hand pressed into mine while she finished the step. Her eyes opened wide when I correctly guessed her ethnicity from her last name, which not many people could do. Anytime we worked together thereafter, she'd stretch out her delicate hand the same way. This caught me off-guard at first because she was very quiet, but on reflection, she wasn't mousy -- more like hiding things. Hannah is the type who I wouldn't be surprised to learn has run off to L.A. to do porn -- I mean, it's good money and, y'know, just to keep from getting too bored.

She nearly knocked me over one day in the summer. It looked like she'd just come from the pool or the beach, her skin bronzed and her dark wavy hair spilling down her neck and over her tank-topped chest. I was rummaging through the pencil box to find one with an eraser and saw her walking straight at me -- and not in that Power Bitch stomp way that cougars do, but by gliding as nimbly and purposefully as she would to surprise someone from behind.

When she got within four feet, I looked at her, and she was staring me dead in the eye. With her little hand, Hannah threw back her tawny locks, exposing the top of her breasts, and gave me a suggestive "Hey..." right as she passed by. I didn't flinch, just giving her a neutral "Hey" back, probably with an impossible to conceal smirk.

I think that was the last time she showed up. God knows if she'd returned in the fall, she would have embroiled me in an affair and gotten me fired. (She was above the age of consent, but there was probably a "fuck the students and you're fired" clause in my contract.) There really ought to be some kind of temporary insanity defense in such cases, though, so that I could've kept my job. I mean, Your Honor, are you telling me you wouldn't have hit Hannah? 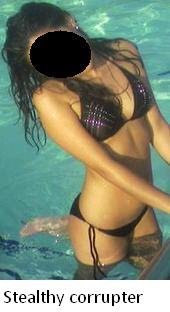