Osama bin who? Or, the world changed back

Since it's easy and fun for smart people to talk about what smart people talk about -- it's called "intellectual history" -- I've come up with more graphs on how the NYT has covered various topics since 1981, when their search engine results become very reliable. Now we'll look at terrorism related themes.

First, the topic of terrorism in general: 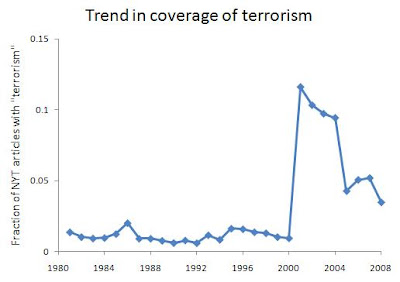 There's a steady level through the 1980s and '90s, an unsurprising spike in 2001, a still high level through 2004, and then a sharp decline since, including another noticeable drop in 2008. Hopefully this means that the elites are becoming cured of the idea that we face our greatest threat from a handful of Third World loser males with less infrastructure than a First World pre-school.

Next, the topic of Muslim extremists: 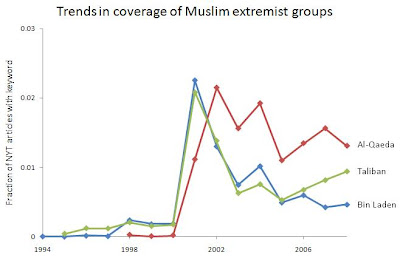 There's an article here and there during the '90s when these groups get enough power to make an impression, a spike in 2001 or 2002, and then a decline afterward. The drop is pretty sharp for Bin Laden, slower for Al-Qaeda, and steep for the Taliban as well, but they have seen a steady increase since 2006. To the extent that the Taliban are at least in control of something rather than nothing, it's encouraging that they're the only group who's seen something of an increase lately. The declines overall are also reassuring.

And finally, the topic of our response to terrorism: 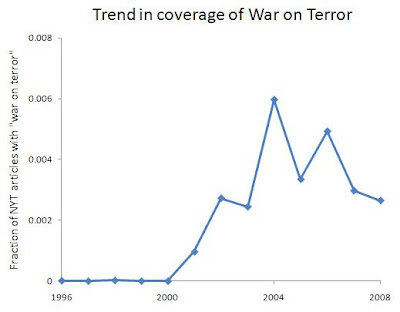 The phrase barely shows up before 2001, increases from then until a peak in 2004, just after the beginning of the recent occupation of Iraq, and a decline since then. This is good news too, since it means the atmosphere isn't so highly charged. It should be much easier to point out to people how little we're getting from being the bully who controls one of the most useless sandboxes of the world's playground.

Before 2008, there's an apparent 2-year cycle apart from the downward trend. It looks like it's a bit higher than you'd expect in election years and lower in non-election years. The trend was already sharply downward, but since the economy blew up, even fewer people during the 2008 election cared about luxury policies like war.

Eyeballing the "war on terror" graph, hopefully it'll be all done by 2012 at the latest. There's no reason Obama couldn't stop the waste tomorrow, but he'd have to be an individual who didn't give a shit about what the crowd thought. If he does respond to the crowd, it'll take longer, as the spread and disappearance of an infection (or whatever) from a large population happens over a much longer time scale than that at which an informed and reasonable person could make a decision about what to do.

That is because most people are neither informed nor reasonable, and so their preferences are mostly gut reactions to events and to other people's gut reactions -- they drive their own growth at the outset. Only someone quarantined from the crowd can come to a good decision more quickly.