It's officially over for Crooked Hillary 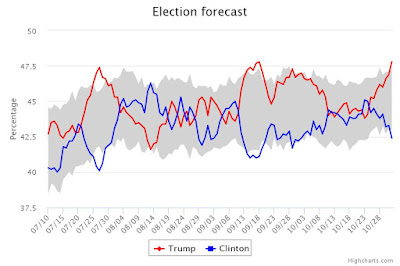 This is the third time that Trump's lead has placed clearly outside of the 95% confidence interval (gray area), the earlier times being his Convention bump, and the wicked witch's collapse on 9/11 making people think that she would die before hypothetically taking office.

Notice that her lead, even when she's had it, has never placed outside of the 95% CI, although it came close during her post-Convention bump. She has quite simply never been the decisive favorite in the race.

Now with the re-opening of the FBI investigation into her email server, and the public awareness that the FBI is also investigating the Clinton Foundation -- and by extension, everyone connected to Clinton world -- people are again thinking that she'd be effectively dead on arrival.

The historical models (Norpoth, Lichtman) had already predicted a win for the opposition party, so what these key events do -- Convention, collapse, FBI investigations -- is give people a rationalization to latch onto, in order to consciously justify their gut-level intuition that they don't want four more years of the incumbent party and its failures (Obamacare, ISIS, TPP, etc.).

This latest development could be making things worse than just providing a rationalization for pre-existing anxieties, though, as it is bringing to light a catastrophic failure that people had not even been aware of over the past four years -- the corruption galore at the highest levels of government, with the incumbent party's nominee herself being at the very center of it all.

After the last surge relating to Clinton's collapse, there was a correction when people saw her somewhat out-and-about and not on life support in a hospital bed. Will people correct their initial panic this time? It seems hard to believe that it will come back down to where it was, since Clinton -- and Clinton Inc. -- will be under FBI investigation indefinitely, and any news will be bad news.

This time there's no way they can just shoot her up full of drugs and parade her around in public for a debate to assuage the fears of the voters. She's been knocked down, and she won't be getting back up anytime soon (if at all).

It's also hard to believe there won't be any recovery -- don't underestimate the extremely partisan polarization that exists in the electorate today, where her supporters could wave away Hillary going on a shooting spree in a mosque using bullets smeared in bacon grease.

Still, this latest disaster may have shaved a full point off of her ceiling of 45%.

The best part lately has been all of the pouty exasperated pleas for civility and decorum from the side that has been running the dirtiest, foulest, emptiest campaign in history.

Welcome to the jungle, baby -- you're gonna DIIIIIEEEEE