The rise and fall of heroin deaths over time

The death of Philip Seymour Hoffman struck me as unusual for involving heroin. That seemed to be a much bigger problem in the '90s, not just use of the drug itself but also its glorification in the "heroin chic" trend in fashion advertising, and even in the spacey, strung-out sound of "shoegazing" music in the UK and some alternative music in the US.

So I went to Wikipedia's list of notable drug-related deaths, and plotted the heroin deaths over time. They are grouped into 5-year periods, with the mid-year shown on the chart. This is not a rate, simply the number of deaths. 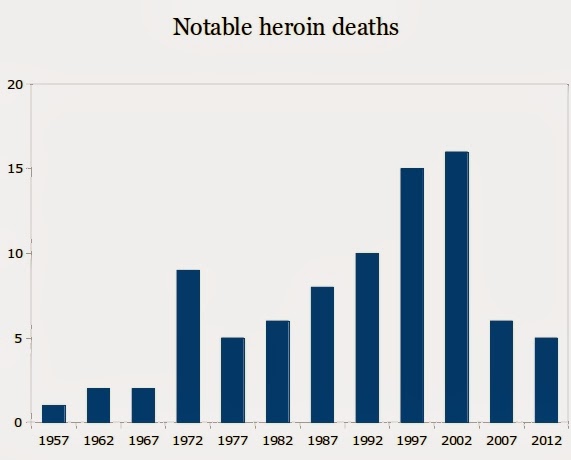 Sure enough, these notable deaths peaked in the late '90s and early 2000s -- more than one per month -- although notice that huge spike in the early '70s -- Jim Morrison, Janis Joplin, et al.

These deaths mostly follow the outgoing and rising-crime phase of the crime-and-cocooning cycle. They began rising during the '60s, and have been in dramatic decline recently. However, unlike the violent crime rate and outgoing behavior, deaths from heroin peak about 10 years later. The crime rate peaked around 1992, and these drug-related deaths around 2002.

That is a general pattern as far as I can tell. Hard drug use among American high schoolers also peaked in the late '90s and early 2000s. (See the Youth Risk Behavior Survey, a nationally representative sample that asks about various risky behaviors.) Among white students, the likelihood of having ever used heroin peaked in 2001.

In Dark Paradise: A History of Opiate Addiction in America, David Courtwright found a similar pattern. He looked at opiate use during the previous outgoing / rising-crime period, from roughly the turn of the 20th century through the early '30s. The drug trade peaked in the late '30s or early '40s, about 10 years after the peak of the homicide rate in 1933, and well after the exuberance of the Jazz Age had begun to wane in favor of the more restrained and streamlined Midcentury.

Most social and cultural trends move right along with the cocooning-and-crime cycle, so the consistent delay or lag in the drug cycle is a puzzle. It shows up for all kinds of drugs, and across two separate crime waves. My hunch is that drug use doesn't decline right away like everything else because it doesn't have to be a social activity. It could just be the troubled teenager alone in his room looking for a way out.

If so, it wouldn't matter if the society is becoming less exciting and people more withdrawn. It's not like going out for a joyride. Still, why doesn't it continue to climb, then, during a cocooning / falling-crime period? Or at least plateau? Drug use does begin to lose its appeal, but it takes about 10 years.

Perhaps the folks who have just lived through the rising-crime period are self-medicating into the falling-crime period. You might have been abused when you were a child in the '70s or '80s, and then tried to numb that out when you were a teenager or 20-something into the '90s. But once your emotions start to stabilize during your 30s, you don't need hard drugs so much.

The next cohort who was far less likely to have lived through something requiring self-medication (the Millennials or Silent Generation) would be less likely to start using in the first place.

I wish I had more intuition into what's going on here, because the 5 to 10-year lag of drug use behind all other forms of risky behavior is consistent and puzzling. If anyone has some insight, please chime in.