Do girls decorate their walls with dream dudes anymore?

To probe just how segregated the sexes have become over the past 20 years, it's worth taking a look at their private spaces. Perhaps guys and girls make up for not interacting much with each other in public by intensifying their focus on the opposite sex within the secure isolation of their room.

That's not what you see, though, in the pictures that accompany articles on what college students buy to fill up their floor space and cover their walls. If anything, they have more pictures of the same sex than of the opposite, especially in a sex symbol context. What those articles show jibes with my real-world impression of what the typical college chick's room looks like nowadays (don't know about guys).

Let's run through a quick historical comparison of what young people's rooms look like. This post will cover girls, and the next will move to guys.

Scenes like the ones below would have been common in the 1980s, where the girl has either chosen a particular dream dude to obsess over (John Taylor from Duran Duran, on the right) or to just throw together a collage of all the dream dudes she's crushing on, unable to choose just one (on the left).

These days, girls won't put together a constellation of cuties, and if they do obsess over a single guy or music group, they pick from the most sexually passive choices -- Harry Styles and Louis Tomlinson from One Direction (both gay), Taylor Lautner from Twilight (gay), Justin Bieber (not gay, but girly), and so on. It's their way of soaking up attention from a cute boy without feeling like they'd have to give anything in return -- he wouldn't be so rude and crude as to assert himself, just staring and worshiping from afar.

John Taylor doesn't look anything like that. (It may be hard to see in that picture; here is another old publicity photo.) His attitude is assertive and in-command. He has what used to be common, a red-blooded male sex drive. My mother wrote him a gushy fan letter when she was around 27, so he was not an innocuous "first crush" kind of pop star for 12 year-old girls. Hence, unlike Bieber, One Direction, and that gay werewolf, a decent number of young guys looked up to Duran Duran as role models -- someone it would be cool to hang out with. Whereas every young guy looks at the insipid pop stars of today as girly, whiny faggots.

What about the actors in the collage on the left? They too were chosen for being the type who wasn't afraid of getting close and flirting with girls, rather than staring creepily / lustfully from afar. Rob Lowe is from the same mold as John Taylor. Even Michael J. Fox adorned lots of girls' walls back then, despite being short and not muscular (although a quick check shows that girls do think he has a cute face). He was cocky and playful enough that it didn't matter. And he wasn't cast as a harmless do-nothing pretend-boyfriend -- he was a take charge kinda guy in Family Ties and Back to the Future.

Who, then, do girls these days put on their walls? Looking around Google Images for "my room," and searching my memory, these six examples are representative. 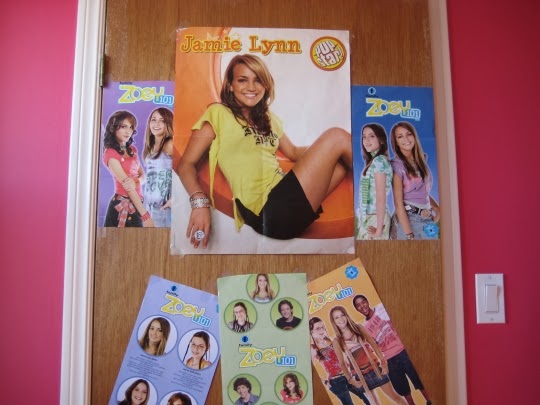 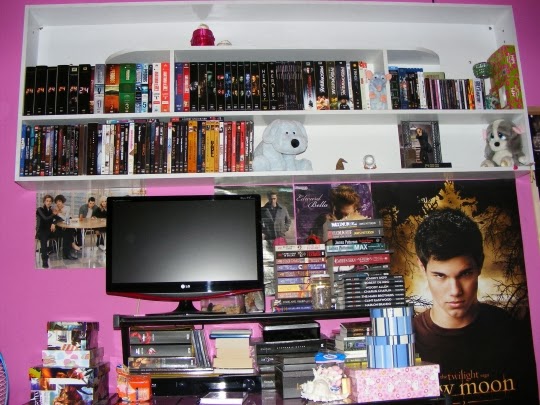 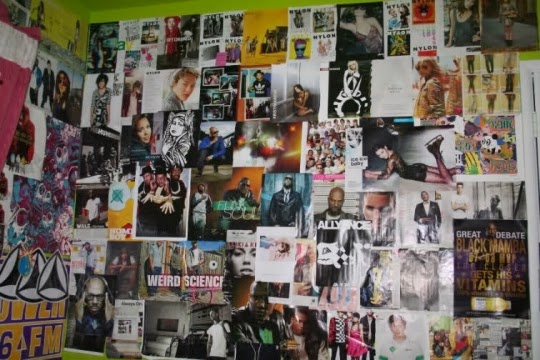 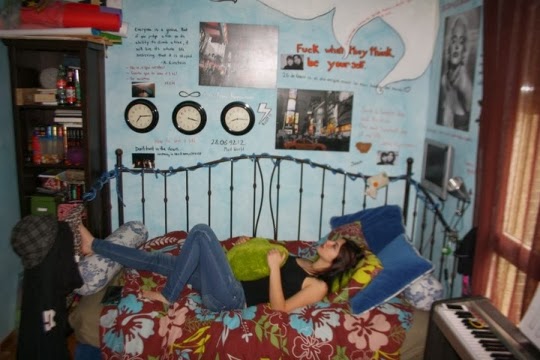 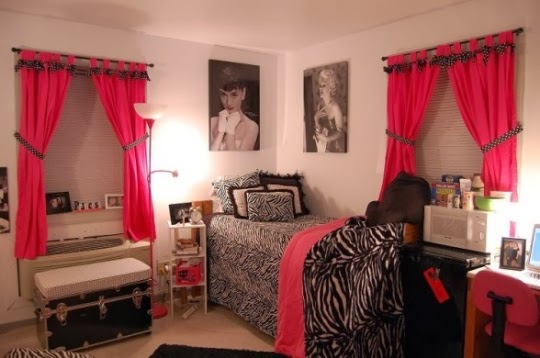 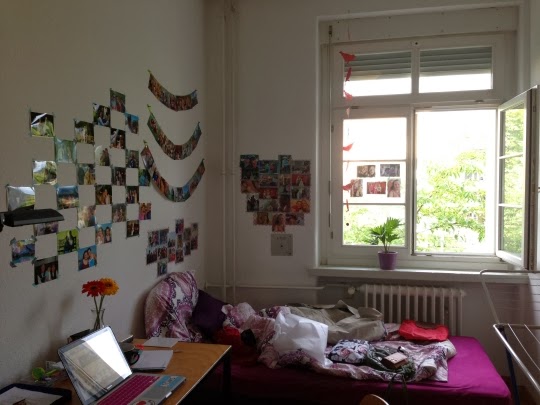 #1 shows a same-sex role model, and a few lesser others. The girl wants to look, act, and be like the character on a teen-themed TV show. And since female status these days is not defined by who she's dating, she wants to be like her role model in order to out-maneuver the other girls at her school in a status contest about who has the best hair, the best clothes, and the best superior attitude.

#2 shows a couple guys, but again chosen to be sexually unassertive, lavishing attention on her without expecting anything in return.

#3 is what #1's room will look like when she gets to college and the female-vs.-female competition gets more nasty and intense. Most of the pictures are of role models who she hopes can inspire her to be the most smug, aloof, and dismissive bitch toward the other girls on campus. It really is strange how fashion models have changed from being inviting and playful in the '80s to haughty and contemptuous since the '90s. The handful of guys on her wall are not dream dudes, but opposite-sex role models for smug, dismissive, etc. presentation.

#4 has the ubiquitous Marilyn Monroe poster, and it's no surprise to see the rest of the wall reflect the self-centeredness of someone who idolizes a gold-digging, man-twisting icon. No yucky boys allowed on her walls. Also: "Fuck what they think, be yourself." Presumably "they" are mostly girls, i.e. "haters," i.e. "those other jealous bitches." These scenes highlight how a good share of girls today are not only uninterested in or hostile to boys, but are not finding comfort in a sisterhood either. It's every bitch for herself, and she chooses her role models to be those who could strike envy into the maximum number of other girls as possible, not those who are necessarily the most well-liked.

#5 shows a less vile version of the worship for Marilyn Monroe and Audrey Hepburn, and the pink-all-over sets the mood for a "girls night in" -- still closed off to boys, but at least trying to get along with one another. The overly cutesy look helps her and her friends to resist maturing into adolescence (and taking the necessary steps toward interacting with guys), and remaining snug and warm in the pre-adolescent world of a child who's playing dress-up.

#6 is the least off-putting of the mainstream types. These girls tend to shy away from fierce status contests and hence don't fixate so much on which role models could inspire them to win. Why doesn't she compete? She tends to be a Plain Jane or just shy. The photographs on her wall are mostly of her same-sex friends, along with a handful of pics with her unassertive guy friends who play a tempered-down version of the Twilight Dude role -- she gets her ego assuaged because there they are, proof that she isn't rejected by boys, but still without having to get involved with them.

Do girls themselves recognize these patterns? Here is a slideshow from a women's website on the "9 typical dorm room posters that we should all agree to stop buying." Both Audrey Hepburn and Marilyn Monroe make the list, and no male sex symbols do. (If they have the Abbey Road poster, it's not because they're hot for Paul, but because they want to establish their hip cred.)

So, in our neo-Victorian times, not only do girls show little interest in the opposite sex when they're out in public, boys remain out of sight and out of mind even in the privacy of their own room. Their thoughts and behavior have shifted toward comparing themselves against other girls and winning at female status contests -- and not those that land them the most desirable boyfriend. The boyfriend goal is not seen as incompatible with, so much as a distraction away from their main goal of towering over all those other jealous bitches.

Be careful what you wish for when you hope that girls stop paying so much attention to what boys think about them (an anachronism these days anyway). To be liked, they must make themselves likable. Otherwise they wind up with empty personalities, either withdrawn or outright haughty toward people in general, including those who you would have expected to be their female BFFs now that they aren't so obsessed with dating.

When girls stop being boy-crazy, they don't become girl-friendly instead. Rather, now that girls are locked into their own world of female-female competition, they turn cattier and bitchier toward one another. It really is the worst of both worlds. Back when girls chased boys around, they also had stronger and larger social circles with their fellow females. Pro-social vs. anti-social is an across-the-board difference.