The school rock, and youth culture in small towns

One of the strongest signs of the lack of cohesion among young people is the absence of physical markings in public spaces that let everyone know, "This is our place." It is therefore one of the most invisible changes to have taken place over the past 20 or so years.

Couples and friends used to carve their initials or names into wet cement on sidewalks, assorted local kids might carve their identities onto tree trunks, and high school classes left their mark on the school rock out in front of the main building. These are all intensifiers of group cohesion -- signaling that the individual who made the mark identifies with all the others who have left theirs in the same spot. It's as though everyone is signing one great big guest book for the party of their generation.

If you keep your eyes peeled, you can still see those carvings on the sidewalk that read "Rusty + Tina '82." And if there's a walking path through the woods that's been used for long enough, you can still find those trees that are encrusted with signatures from anyone who was a teenager in the '60s, '70s, '80s, and early '90s.

The school rock, however, is more vulnerable to being reclaimed by the school authorities or removed altogether. That's harder to do with trees along a walking path or neighborhood sidewalks. Once young people lose interest in asserting their generational togetherness, the slightest cost or risk will turn them off from it. It's not as though painting on the school rock would carry a prison term. Even something like going to the principal's office and paying a nominal fine to have the rock cleaned is enough to discourage them into thinking "Meh, not worth it." A group that was more tightly glued together would feel emboldened to paint the rock, fine or no fine -- "Like what are they gonna do, throw us in jail? Fat chance, fags!"

I haven't seen a "school rock as student-run media" in decades, way back when I was a grade schooler walking by the high school. But maybe I've been in the wrong parts of the country, so I searched Google Images for "school rock" (minus "school of rock"). In the hundreds of results, I only found four showing an actual school rock, three of which were contemporary. You can search for "school parking lot," "school billboard," "school tree," "school garden," etc. and find tons of pictures. Just not for "school rock."

The thing they all share is being mostly white. Communal cohesion rapidly degrades when a place becomes more mixed-up.

Age structure doesn't seem to matter, when you'd expect that it would. Could be due to the small sample size here. But I have noticed something similar to that Coupeville, WA situation playing out in the Weirton-Steubenville and Wheeling metro areas in eastern Ohio and northern West Virginia, when I visit the place where my mother's side of the family is from. You can still see graffiti on the overpass proclaiming "Van Halen rules," and somewhere there's a large playground with all the good old dangerous rides still there (though not much in use). We saw a small group of middle school kids hanging out around there smoking in the afternoon. The whole region is so gray-haired and withering economically that perhaps the grown-ups feel they might as well try to give the kids some kind of fun before they leave for greener pastures after high school.

The towns with a school rock are also on the small side, with greater student freedom at smaller population sizes within the sample. The Powers That Be don't really give a shit about what goes on in small towns. They've got their eyes on the prize, something that they could stick the word "flagship" onto. Small populations will also be more variable in their outcomes. If there are only 10 families with kids, it would not be unlikely for 80% of the parents to be easy-going old school parents who let their kids form peer groups. (Although you could equally get just 20% being old school.) But if there are 700 families, the law of large numbers takes over, and that place will look like every other one that's been ruined by the helicopter parent majority.

Going back in time, as far as I can tell, student ownership of the school rock was not a central feature of youth culture during the cocooning Mid-century. In fact, the other result from Google Images shows a newspaper photo from 1967 -- which in turn shows a school rock introduced by the class of 1917, relating the story of the rowdy rivalry between the class of '17 and the class of '18 over who could have their class year carved onto the face. (The originators prevailed.) That was back during the Ragtime and Jazz Age, when young people were allowed to form unsupervised peer groups. Hard to imagine the school rock rivalry being commonplace in the era of Leave It to Beaver. But a look at old high school yearbooks could shed some light here.

I'd thought of the "school rock" phenomenon awhile back, but was reminded to do something about it while reading this recollection of its role in student life during the age of Dazed and Confused. It comes from the author of a graphic novel / memoir about going to high school with Jeffrey Dahmer, before he became completely unhinged but when there were clear early signs that something was not-quite-right about the guy.

When the news of Dahmer's crimes first exploded in July 1991, I drove down to my folks' house to rifle through the boxes of high school material stored in the basement, as art for stories in the Akron Beacon Journal, where both my wife and I worked at the time. My parents live very close to the high school and I passed it on the way. As I did, I observed that some smartass had already painted "Class of '78- Dahmer" on [the] rock, mere hours after Dahmer had been arrested! The first of many surreal moments. I stopped and snapped the photo below. 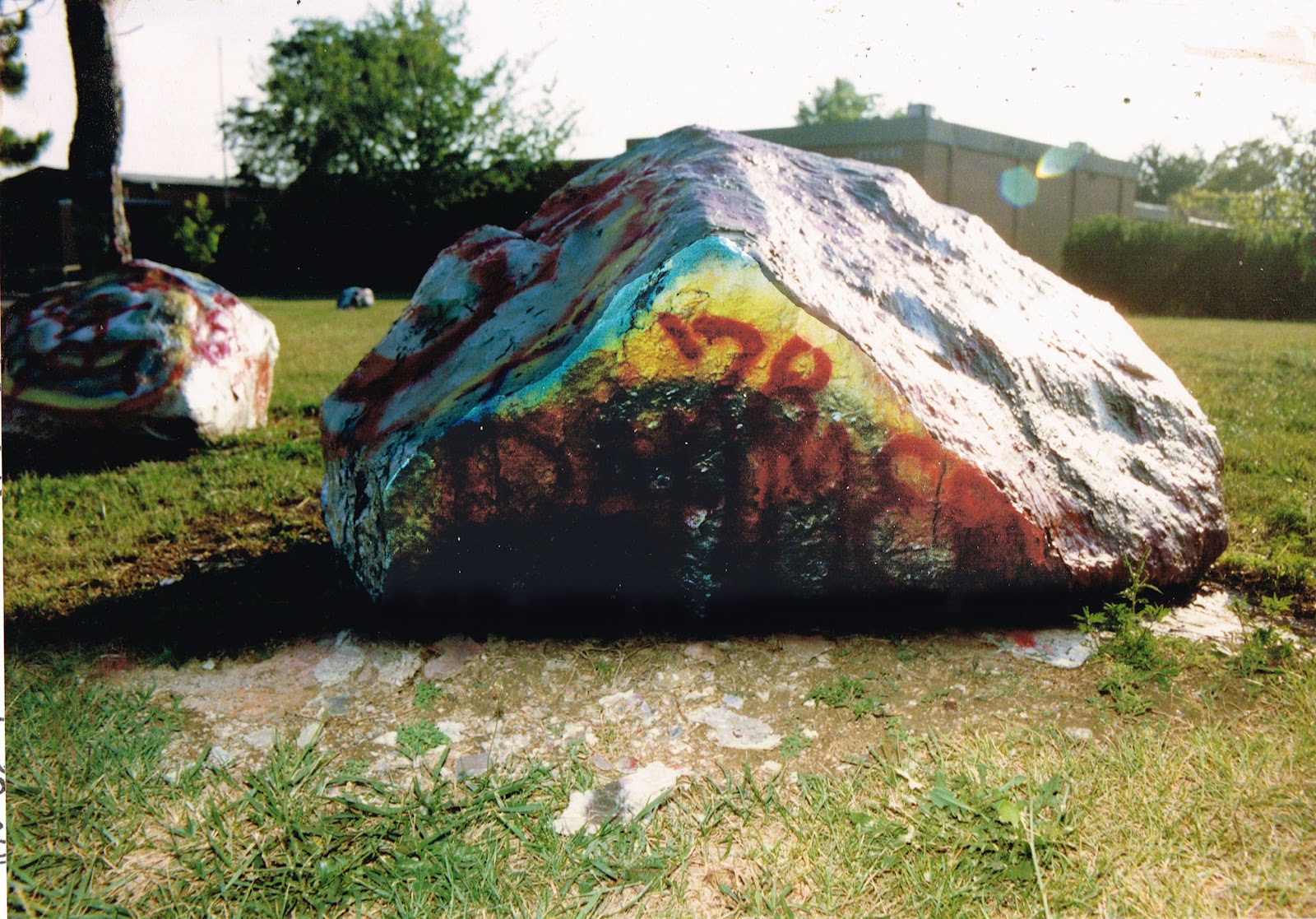 Check out how many colors there were by the early '90s. There also appear to be drawings in addition to text. This picture could have been snapped of the school rock that I used to walk by in my own neighborhood around this time, though it was a little more subdued. That was Upper Arlington, Ohio, a suburb of Columbus. Backderf and Dahmer went to school closer to de-industrializing Akron. The part of Ohio I mentioned before is on the eastern border with WV.

So perhaps the thing about small towns applies at a larger level -- entire regions that no one cares about will allow more of a thriving youth culture (allow, not necessarily encourage). The control freaks are going to head over to where there's something worth controlling, like Manhattan or San Francisco. It's striking how little those two cities contributed to popular music, especially on a per capita basis. Akron, OH circa 1980 had around 240,000 people and was already in steady decline, yet produced Chrissie Hynde of The Pretenders, The Waitresses ("I Know What Boys Like"), and Devo. Nearby rust belt city Cleveland produced The Raspberries, Dazz Band, and Nine Inch Nails.

I hope to cover more of the mood of the Seventies, as conveyed by Backderf in My Friend Dahmer, since that period doesn't get much treatment in the history of youth culture. Political and economic trends, yes; movies directed by an auteur, yes; but not for what was going on with the kids these days.