Syrupy advertising is Coca-Cola's specialty, such as their nuclear family of cuddly polar bears. (Where are the saber-toothed tigers when you need them?)

So their schmaltzy Super Bowl ad glorifying the families of all colors across the world should not be surprising. It is community cohesion that makes a cultural group confident enough to ask that other cultures prove themselves as equals, rather than lazily accept them as such. Nuclear family-centrism breaks down communal bonds as each household isolates itself from the others, leading to the "amoral familism" that Edward Banfield described as the "moral basis of a backward society," i.e. Southern Italy.

As long as other family units leave our family unit alone, we wish them all the best. And if our standard for evaluating the worthiness of foreign cultures is the flourishing of family life, then everybody wins. How hard is it to find a place in the world where parents are raising families? Just spin the globe, and there you go -- parents nurturing children, siblings playing with each other. These behaviors are so basic to human existence that they don't set much of a standard for judging which cultures are worthy of our respect and which are not. Some places are ruled out, sure, but the family standard is far more inclusive than it is discriminating.

Before the shift toward atomized family units in the 1990s, our culture prized communal bonds. Outside of the family, people tend to associate with folks their own age, so the communal focus meant especially a focus on the cohesion of peer groups and generations. Hence all of those classic teen movies about belonging to a group in the '80s, and their lack of descendants in the age of helicopter parenting.

What kind of advertising did audiences resonate with back then? Whatever was cool. Coolness does not play a role when social interactions are entirely among family members. It only takes on a life of its own when folks are interacting with people outside the family. If today's victims of helicopter parenting strike you as being strange for not caring about whether they're cool or not, that's why. In whose eyes would they be cool -- their parents? B.F.D. Might as well worry about something else.

Pepsi began to gain on Coke's popularity during the move away from families and toward peers, namely from the '60s through the early '90s. This success was due to their ad campaigns emphasizing hanging out with friends and being part of a broader cohesive generation.

As early as the late '50s, their slogan was "The sociables prefer Pepsi" -- y'know, unlike those dorky kids from Leave It to Beaver who don't have a broad social life. Phrases like "sociables," "think young," "the Pepsi generation," "Join the Pepsi people," and so on, all underscore their appeal. This would culminate in their slogan during most of the '80s and early '90s: "Pepsi. The choice of a new generation." Their cola was chosen as the membership badge for the cohesive generation of young people.

Pepsi began losing the cola wars in the mid-1990s, as the return to cocooning and helicopter parenting took hold, and by now they place behind not just Coke but Diet Coke as well. New attitudes favoring family life over communal (peer) life have eroded Pepsi's advertising appeal and ensured Coke's return to saccharine glory.

Also, Pepsi's attempt to stay relevant by continuing their emphasis on what was young and cool ran into a big problem during the '90s -- young people were not so cool anymore. Britney Spears and Beyonce are not Madonna and Michael Jackson, nor were their fans as cool.

But before the lame-ification of society, Pepsi's commercials tapped into the thriving youth culture, and looked and sounded about as cool as you can expect TV commercials to be. And given how many of them we watch, that's no small improvement for daily life.

Here are a handful of memorable ones on the theme of new wave and "more than meets the eye." Notice how many are shot at night and have an exciting light-dark contrast. Lots of commercials back then did. You can find the other ones on YouTube, including the ones with Michael Jackson and Madonna, which aren't wave-y to go here.

David Bowie and Tina Turner sing a duet for "Modern Love" (turn up the volume on this clip). He fits great as a mad scientist in the re-working of Weird Science.

Michael J. Fox finds a Pepsi can photocopy that comes to life.

A futuristic archaeologist discovers a Coke bottle and doesn't know what it is. Pepsi has taken over (feels dystopian when you watch it now).

Cindy Crawford in jean shorts and a tank top with no bra. As a counter-point to the futuristic and electronic ads.

Pepsi also spanked Coke when it came to product packaging. Who else remembers their "cool cans" designs from 1990? It was cool, and unexpected, to see neon lights on a black background for a soda can. And so stylishly restrained -- not like the explosion of bright, sharp shapes you'd see on today's energy drinks. 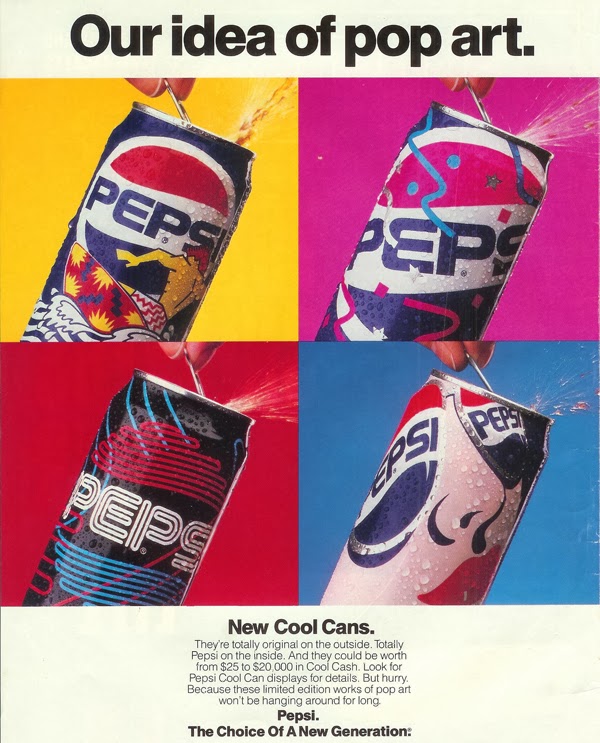 The closest that Coke would come in coolness was the Max Headroom campaign when it launched New Coke. The taste was made to be sweeter like Pepsi, and the ads echoed their rival's new wave style. 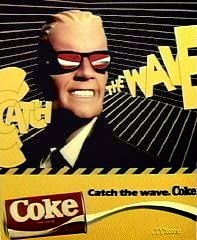 I haven't drunk soda regularly for probably 10 years, so I have no dog in this fight. But all of us have to put up with advertising, and I'd rather it look and sound cool than be drab and schmaltzy.