The looks of today's hit singers could not be farther away from the '80s, a time when audiences didn't care if Phil Collins was short, pudgy, and bald, or if Ann Wilson from Heart was heavy-set. As long as they sang with enough soul and got your body moving, who cares what they look like? You weren't going to make a move on them. There were plenty of people in real life to get up close and personal with. That's whose looks you worried about -- the other people at the party.

But in today's climate of cocooning, people have redirected their longings toward personas who can be delivered into their private household without actually having to interact with them, AKA celebrities. Singers are no longer performers first, but rather surrogate boyfriends and girlfriends (if they're the same sex as the listener, then surrogate friends and allies).

It's depressing to see how many "followers" Katy Perry and Justin Bieber have on Twitter (around 50 million each), as though they had some kind of personal connection, even though every one is no more than a non-friend on your Facebook friend list. And we know roughly how many followers they'd have if they looked like Phil Collins or Ann Wilson...

And that's only the tip of the iceberg. Here are the top 100 songs on the Billboard charts for the entire year of 2013. I don't know about the guys, but nearly all of the girls just happen to be good-looking. Even the ones who are not, like Pink, market themselves as sex symbols, and are accepted as such by enough listeners to enjoy continued success. Then there are others who look good but don't exude any sex appeal, such as Selena Gomez. Those who get the most followers have both good looks and an eagerness to play up the role of sexual instigator -- someone whom an awkward cocooner would not have to interact with and win over, but who would make all the advances by themselves.

Turning to celebrities as a substitute for a lacking social life should remind you of the mid-century, another cocooning period when celebrity gossip magazines were the top sellers at newsstands, and when ordinary people wanted to live glamorous romances vicariously through celeb super-couples.

So let's have a look at the female singers who made the year-end charts in 1954. There are only 30 songs listed, yielding six performers. (From left to right, top to bottom: Doris Day, Kay Starr, Kitty Kallen, Patti Page, Rosemary Clooney, and Jo Stafford.) 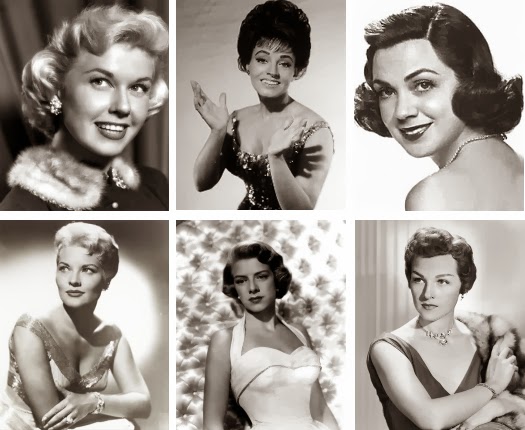 Pretty easy on the eyes, and all but Doris Day are shown baring most of their chest and back. Not to mention the Hollywood glamour they're playing up. What constituted a sex symbol back then may be somewhat different from today -- no ho-bag dance moves -- but they were still clearly marketed and accepted as va-va-voom by contemporary audiences. (I'm not sure when exactly these were taken, probably between 1945 and '54.)

Now let's turn to the mid-point between now and 1954, the top hits of 1984. I'm going to go through each female singer to show I'm not only cherry-picking the pieces that fit my worldview.

Tina Turner was not attractive, and was 45 years old. Deniece Williams is plain-to-below-average. Cyndi Lauper's a little better-looking, but not babe material. None of the Pointer Sisters would have turned heads, nor would Shannon. Ditto Alannah Currie from Thompson Twins. Annie Lennox was kind of cute, but tried to subvert any attempt that others might have made to turn her into a sex symbol. Patty Smyth was happier being a cute little Pixie, though again not really movie star / va-va-voom. Pat Benatar seems a too tomboyish and her cheekbones too masculine to have been a sex symbol, but maybe she was to metalhead dudes. Ann Wilson's weight we've already covered. Christine McVie was below-average and 41 years old to boot.

Irene Cara looks above-average. Tracey Ullman wasn't a babe, but was pretty and did play the instigator role. Bananarama were still new wave hip chicks and not sex bomb dance vixens at this point; the video for their 1984 hit "Cruel Summer" shows them in baggy tomboy clothes and not allowed to show off their faces or bodies. The Go-Go's were cute, though "sex symbol" doesn't come to mind for these down-to-earth girls. I'd feel more comfortable calling Nena a sex symbol: aside from looking beautiful, she had a fun-loving and provocative personality. But she gave off a wholesome vibe, where sex symbols in the '80s would had to have given off a more determined or man-eater vibe.

That leaves only four who are good-looking and va-va-voom enough to make "sex symbol" appropriate: Laura Branigan, Sheila E., Madonna, and Olivia Newton-John. (Throw in Dolly Parton if we're counting duet partners.) And remember, this was way before Madonna totally slutted out in the '90s, so don't give too much weight to her appearance in the list. The three songs that put her on the year-end charts in '84 were from her first disco-pop album, and none came with a very suggestive video.

It's not as though all the hit female singers were fugly. Still, it's hard not to notice how much plainer and human they look on the whole compared to the pop singers of the '50s or the 21st century. Again, as long as they could make you feel what you wanted to feel, who cares if they looked good or not? Your dance partner was the one you hoped could turn heads.

I think you'd see the same pattern over time among movie stars as well, and for the same reasons. Bill Murray and Sigourney Weaver make a heart-warming couple in Ghostbusters, but looks-wise they're not Gregory Peck and Audrey Hepburn in Roman Holiday. In The Karate Kid, Ralph Macchio and Elisabeth Shue are the attractive kids from your own high school. Audiences in the '80s wanted someone approachable like the girl next door, not a Hollywood-conquering sex bomb reincarnation of Cleopatra. But that's a topic for another post.