The Brick: A modern cell phone for talking, distraction-free

While grumpily looking into why today's cell phone networks won't accept the early cell phones, with their superior ergonomics and minimum of distraction, I found out that somebody's actually trying to re-introduce that style of cell phone in today's market. Late last year Binatone released The Brick to appeal to those who long for a phone-phone (although it does do texting, contacts, alarm, calendar, etc.), as well as those who have design nostalgia for the late '80s and early '90s. 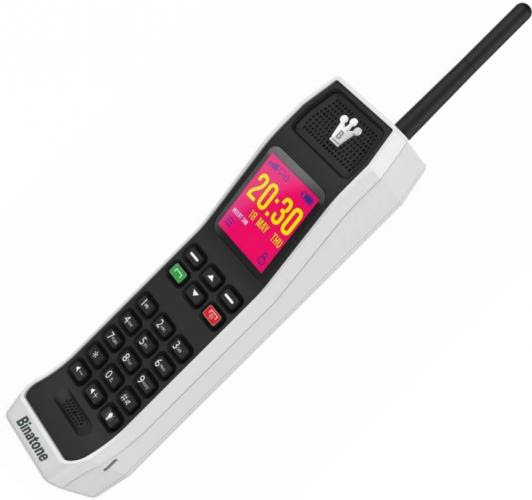 (You can also connect it to a smartphone through Bluetooth and use it as a more ergonomic handset than that sardine tin of an iPhone.)

The reviews for the techie press were uniformly awful, and in the same predictable way. "DOES NOT COMPUTE. Progress moves forwards not backwards. Thus answer true or false: this brick phone is pointless and for yuks only?"

Technophiles are what have ruined consumer electronics, obsessing over sheer newness rather than the human factors that matter to the normal people who will be using them. Fortunately for the tech press (and the industry they cover), more and more folks these days are borderline autistic, so their pro writers are not so far removed from the mainstream as they would have been back in the '80s.

I don't know when it'll happen, but I'll definitely be getting one of these Brick phones this year, the sooner the better. I never have owned a smartphone (by choice), but I still don't like the ergonomics of flip phones, even if they're not as bad as smartphones.

Even without seeing, let alone operating one in person, several welcome blasts from the past jump out at you about this new old phone.

First and most importantly -- no portable idiot box. The sooner we start shaming people away from their on-the-go IV drip of cyber-heroin, the sooner we can all get back to having a life. That can't happen unless enough folks are willing to set aside their distractions for enough of the day to be social.

No crappy camera. Pictures began to slide downhill with the introduction of digital, but have fallen off a cliff with camera phones. Cameras (digital or film) are not expensive or bulky. Take some of the money you saved from not buying a smartphone and get a separate camera that won't take such crappy pictures.

Superior ergonomics. I can't stress enough how important it is for something you're going to be holding and manipulating to feel right. Unlike most cell phones of the past 20 years, the mouth piece is next to the mouth and the ear piece is next to the ear. Sound waves decay as the distance squared, so even minor deviations from the mouth-mouth / ear-ear design will make it hard to make yourself heard and to hear what the other person said.

It still won't sound as clear and rich as a landline call, since it's digital and compressed, not analog and traveling through wires. But that's true for all cell phones.

You can comfortably cradle it in your hand, without having to squeeze, pinch, or tense your fingers. And if you need your hands free for a moment, you can cradle it between your ear and shoulder. Hard to believe these basic features of old phones have been totally eliminated by now, but that's what happens when everyone pretends that they're just so strapped for space / weight burden that miniaturization trumps all other factors.

Not being weighed down is not a real concern with consumers these days, BTW, or else they would not be lugging around their tablets and laptops, in special carrying bags no less. All they use them for is goofing off, so we can dismiss rationalizations about being productive on-the-go. Just goof off at home instead, and you can free up all that space and weight. It's cocooning that trumps all other factors. This makes people bring their laptops into public spaces, to isolate themselves from their surroundings. And it makes people turn to communication through texting or social network messages rather than direct speech.

At any rate, I also like the return to buttons that are spaced out enough to avoid slips and mistakes. And these are buttons that need to be pressed down, unlike the flimsy keypad of most flip phones or the touch screen of smartphones. There is zero tactile feedback from a touch screen -- it passively registers what movements you made, and you may not realize right away that you didn't move your fingers the way you had intended to. With a button that you press down, and that pops back up, you can always tell if you pressed the wrong button, or if you didn't press down hard enough. It'll just feel funny: "Wait, I didn't mean to press down that button."

Battery charge lasts a LONG time -- one month of standby and 14 hours of talking for the regular model. I don't have any contempo doodads, but I notice people worrying about how long the battery lasts whenever something new comes out, and it always sounds pathetic. Yes, I know that the Discman needed new batteries once it's old ones wore out, but you could play that sucker for a lot longer before needing to recharge it. It blows my mind how frequently today's hit gizmos need to be put to bed in order to recharge (at least once a day). With a return to monster battery performance, you'll never screw yourself by forgetting to bring your phone charger when you're away from home.

FM radio tuner. When did they stop including these things in every piece of consumer electronics? No need to tote around music media, if that's such a bother (I don't mind carrying around 4 or 5 CDs). Radio was the original form of cloud-streaming audio. Even better, it was not on-demand, so you didn't have to dink around with what song would be playing next -- whatever will play, will play. Most radio sucks these days, but you've still got enough classic hits / oldies stations to seek refuge.

Media player, and space for a 32GB SD card. Not sure what I'd use this for, except taking a stab at ripping CD tracks into .wav files so I could listen to them in all their uncompressed glory. At 32GB, you could pack in around 45 albums uncompressed. I.e., more than any person would ever need while taking off for the day.

Loud speaker. Does anyone know what sound sounds like coming through anything better than a pinhole? Cell phones, tablets, laptops, etc., all have crappy speakers. I'd have to hear this one to judge for sure, but it seems better than the ordinary ones in audio-playing devices today.

Cool, unpretentious look. Two-tone shell (black face and off-white casing), backlit buttons, off-beat pink-and-yellow color scheme for the LCD screen. I'd probably change the screen's wallpaper to black (you can change the wallpaper to an image file from the SD card), to make the text higher-contrast with the background. I don't know if you can change the text color, too, but I'd set it to electric blue or neon green to make it look like the easy-to-see read-outs on alarm clocks, clock radios, and pocket calculators of the late '70s and '80s (most of which used bright vacuum fluorescent displays).

It looks like they're going to offer a variety of color schemes for the casing, too. I'd actually prefer something from the earlier '80s or '70s, like a beige-y yellow casing and a dark brown face, with off-white or cream buttons and black characters, keeping the special red and green buttons. Something with good contrast still, but with a little more color -- just not loud color.

That would take them away from the very specific late '80s / early '90s nostalgia, but maybe that would be a good thing. Open it up to the broader "vintage" crowd. Allowing simple hex or rgb customization of the colors of the text and background of the screen would make this diversification easier.

After all, the whole point seems to be -- let's dial things back to before The Fall. Whether you want to go back to as recently as possible -- the early '90s -- or further back into the '80s, or further back still into the '70s, doesn't matter. Binatone would have something for each of those "vintage" tastes.

But there is a tough branding problem between pitching it as "vintage" vs. "retro." Techie people definitely resonate more with the phrase "retro" ("retro games" gets more Google hits than "vintage games," i.e. video games). "Vintage" is more for the arts & crafts crowd (a "vintage afghan," not a "retro afghan"). Well, I'll let them sort that out, but they should try to broaden the appeal to as many of the "remember the good old days" crowd as possible.