Tights as pants: Not revealing when there's a colorful pattern

Over the past five years, it's become common for women to wear yoga pants or leggings in place of pants. They're tight enough that if she's not wearing a sweater or whatever that goes down over her butt or crotch, viewers can tune in to the exact contours of her shape in front and in back. Like this: 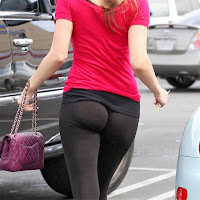 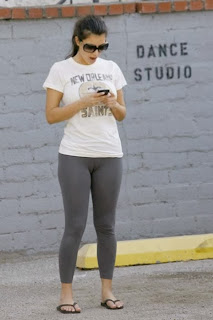 I think it looks presumptuous, like just because we get to see the outline of your body, we're supposed to drop everything and go, "Holy crap -- butt cheeks, dude!" It inflates the girl's ego for free since she doesn't want guys to approach her, only to send looks and thereby provide confirmation that she isn't fat or ugly. After her self-doubt is assuaged, she doesn't want anything further from them. It's self-centered and manipulative, hence poisonous to a public social environment.

So only check out her ass when she isn't looking around for unspoken compliments.

Although guys may not mind the look of it, other women can't stand it because she's giving away what the goods look like, and only charging the viewers very little -- just send her a look that assuages her self-doubt, and she's happy to let you see. And it's not (or not only) that the other women don't have the bodies to pull it off, while the ones showing the goods do -- it's common to see fat chicks wearing tights with no shirt over their butt or crotch.

Rather, they see the tights women as strikebreakers against the union of sisterhood that has a tacit agreement not to work too hard on the job of exciting and pleasing men. Thus, an ongoing campaign of slut-shaming against them. Just google "leggings are not pants" or "tights are not pants." A tumblr page titled seriouslytightsarenotpants has that frustrated bitchy tone of voice, which is reinforced by the greeting: "Tights are not pants, but why is the message not getting through? It's time to get tough, it's time to start shaming them into submission."

Aside from fear of the shamers, most women these days have OCD issues about camel toe, whereas it was totally normal to see back in the '80s. It was familiar, and aside from that, folks showed no lurid fixation on body parts seen through clothing. It was just a natural thing. Ditto women's OCD issues about the bottom shape of their bottom -- "omigosh, do you think it looks smooshed, or like saggy?" Girls had the bottom of their ass peeking out from their shorts in the good old days, and didn't feel weird about it, even though I'm sure they weren't all supermodels back then.

Their solution these days is to insist on wearing leggings only with a sweater, skirt, etc., that will cover the butt and crotch, while still showing the legs. I don't think that relieves their sense of shame, only providing partial security that at least they're covering it up with a fig leaf. They still have this keen sense that, should they raise their arm up, or have to bend over, the shameful sight would come out of hiding under the long sweater. It's not innocuous mindfulness to details, but feeding their constant stress-out. The world needs more easy-going chicks, not OCD cases who continually check and fuss over pointless crap.

Some of the Urban Outfitters kind of girls gave me an idea about how to solve the problem without resorting to covering up. Just wear leggings with a bold colorful pattern on them. Then the eye is drawn more to the color and geometry of the pattern, and not to the micro-contours of the body underneath. You can't really see camel toe, butt crack, or under-butt creases. Not because those folds in the fabric aren't really there -- you just don't notice them when there's so much else grabbing your attention.

Elementary art theory tells us that color and 3-D volume work against each other. The more clearly you want to render lifelike variation in depth of an object, the more you want to show it in one color only. That way, depth cues will stand out more easily, without you being distracted by the variety of colors. You'll be able to see brighter tones of the color where the light source is, and darker tones of the same color on the side that's hidden from the light. That's why statues that are made to look lifelike in 3-D modeling are made in one color, why photographs that are supposed to show volume and depth are in black-and-white, and so on.

Color works against depth cues and the 3-D modeling of volume. In short, you can't really tell how close a part of an object is by what color or hue it is. That's more about how bright or dark the lighting on it is, how hazy or in-focus its textures are, etc. Strong use of color, especially multiple colors, tends to make objects look more like planes or cut-outs rather than finely sculpted 3-D chunks of matter. (For more, see this review of the battle between disegno and colorito in Renaissance Italian painting.)

Below are two front and two back views of girls in leggings with bold patterns in multiple colors. Notice how little their lower bodies resemble a statue's, as you typically see when girls wear single-color leggings. Now their legs look like tubes, and it's hard to tell that the line down the center of the thighs is closest to your eye, while the inner and outer edge of the thighs are farthest away. If they were in black or gray, the light differences would show that -- bright where the light hit it directly, and then rolling away toward shadow in either direction. See the first two pictures above. But you don't see much rolling or suggestion of volume in the pictures below (click to enlarge and see for yourself). 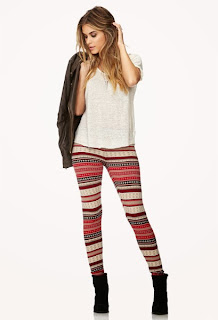 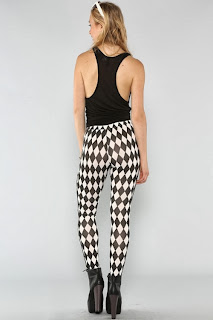 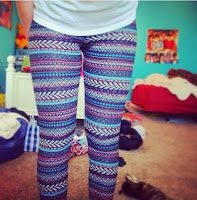 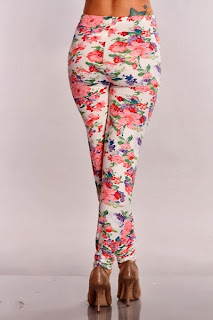 If you could eliminate all of the color and pattern details, you would probably be able to see camel toe and creases in between and under the butt cheeks. With all that crazy color, though, you hardly perceive it at all. Hence no reason to have to cover up with a sweater that is long enough to be a skirt. They simply look like high-waisted pants, giving her a leggy look. They don't give off the naughty associations of hosiery, even if it were covered-at-the-top hosiery. The shamers will have no basis for attacking her, and she won't be crippled by OCD thoughts about "Is my sweater still covering my ass? Maybe I should go home and put on a sweater that goes down to my knees, just to be safe?"

I think these colorful pattern leggings give the girl a funky yet wholesome vibe. They look playful and flirtatious rather than cynically attention-whoring. And they do not look like second skin, revealing every contour of her body, but keeping that 3-D detail hidden behind her tube-y leggings.

I can't see many girls adopting these because females are afraid of bold patterns, which make them stand out from the crowd too much. But if everyone wore them, they couldn't be accused of trying to hog attention with bold patterns. That was the great thing about the '80s and early '90s -- so many dressed that way that they could feel carefree stepping out in off-beat colors and funky patterns. And like I said, our OCD-encumbered world needs more fun-loving and fancy-free women.