For Christmas this week we went to visit my brother and his wife, both transplants living outside of Fort Hood, itself outside of Austin. On the way over we had two connecting flights, and walking around the Memphis airport, it really stood out to me -- Southern girls have some pretty plump rumps. It was the same once we got into Austin, and when we left from there today.

I had a hunch about this when I visited them over the summer, but now it was hard to ignore because everyone's wearing leggings as pants for the winter. Southern girls are definitely packin' more heat in the seat.

Don't take my word for it, though: 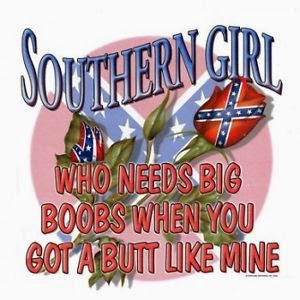 If you search Google Images for the catch phrase, most of them have just the phrase itself. This is the only one that brands it with regional / ethnic pride (not "California Girl..."). And when you search for Southern girl shirts, this is the only one referring to female architecture that comes up, many times. There's no shirt that says "Southern girl. Who needs a butt when you got boobs like mine."

So they seem to think so. Here is some random guy chiming in about why he likes Southern girls better, just stating it as a fact that they have bigger butts. And here is an article about how Southern women are going for plastic surgery to beef up their booty. Most women who would even think about going under the knife to look better would want the opposite done -- liposuction.

In a country that has so much racial diversity, we tend to be blind to or overlook the differences within major groups of a single race. We expect Puerto Ricans to have some junk in their trunk, but Southern belles -- who knew? I have no idea if this is a genetic difference from other white groups. Celts do have more going on around back than Saxons or Scandinavians do, but they're not so well represented among the lowland former plantation areas of the South.

Perhaps there's an environmental influence of heat and humidity -- or local pathogen load? Gangestad & Buss wrote an article showing that pathogen prevalence was strongly linked to emphasis on good looks in a mate. The bug belt of the South would lead men there to pay more attention to a girl's looks than in other parts of the country (especially the colder and drier places). And guys who are focused mostly on looks tend to be drawn more toward the butt than the boobs. Hence, female development goes off on that course in "anticipation" of demand from local males.

Beats me. Probably a mixture of genetic and environmental differences down there.

As for regional differences, we want to make sure we aren't looking at transplants, and that the resolution is fine enough to look state by state. The Youth Risk Behavior Survey is a large, nationally representative survey done every other years since 1991 in American high schools, asking them about all sorts of behaviors that would make their parents worry. One group of questions has to do with sexual behavior, such as have you ever, are you currently active, have you ever before age 13, and have you had 4 or more partners. Here is their online interactive thing. I restricted my searches to female whites in all four grades, using all years available.

No matter which question you look at, you see the same picture of which states are noticeably above the national average, and which are noticeably below. Far and away the most sexually active region of the country is the Greater South, including the southern stretches of Appalachia, the Ozarks, and Texas. I didn't copy the numbers down, but I recall Arkansas, South Carolina, Missouri, and Mississippi standing out, with West Virginia, Kentucky, and to a lesser extent Tennessee rounding things out. Indiana and South Dakota weren't so bad for the average-to-cold Midwest. And Nevada, Wyoming, and Montana are no slouches either, keeping the Wild West legend alive.

It's not like we needed data to tell us what part of the country is the most frigid -- Puritanical New England and the smug and snarky Mid-Atlantic, with Delaware being the only exception. Forget having a sex life if you're a teenager in the New York metro area. (No, it wasn't any better for New York state outside of the City.) I guess being so self-satisfied means never wanting to be other-satisfied.

However, constantly monitoring how men are responding to you sets up its own stream of drama. Although we were out in the middle of nowhere for most of the trip, when we were milling around crowds of people, I could feel girls looking at me more openly than you'd experience in most of the country. Not slutty or obvious, just open. If you give them a quick look and think to yourself "Nice, but I'm not too interested," they can hear your thoughts and read your face. After they've taken two hours to put themselves together, and opening themselves up enough to give you the hint that they've noticed you, it feels disrespectful to just brush them aside. You have to engage in longer fleeting eye-contact and smile more, otherwise they put off this palpable vibe of "Don't y'all forget: Hell hath no fury like a woman scorned."

I wouldn't describe it as them being needy or clingy, but more like insisting on the moral code of "one good turn deserves another." And they weren't only after a quick look to validate their ego ("thank gosh, boy looked at me = i'm not ugly"). They're more frisky than that -- they at least want to stop and flirt a little bit.

How much does the Southern culture of honor have to do with men competing over, and struggling to control frisky females? Nisbett and Cohen wrote an excellent book looking at it from a purely male-male competition point of view. They traced it back to the pastoralist ways of the early settlers in the hillier and more mountainous areas of the South. Their wealth -- livestock -- can move off on its own if driven, so they get very territorial and retaliatory about trespasses. Presumably they don't punish the sheep or cattle, though.

I wonder how much that same dynamic plays out where females are the resource under control (or not, as the case may be). Women who never respond to the advances of strange men, and who don't have even an inkling of desire to be with another man, are like unmovable wealth -- difficult to steal, hence not worth worrying too much over. But frisky females set up a whole 'nother ball game -- not only do you have to establish a reputation among would-be trespasser males that "nobody talks to my girl," but you also have to motivate the girl herself not to stray, and to correct her if she does, unlike with the cow or sheep, who you'd totally forgive if someone rustled them from you.

...Lots more to speculate about, but that'll do for now. This is what fascinates non-Southerners, such as the majority of the audience for Southern Gothic novels. There's plenty of intrigue to go around in our country. Still, in the North, intrigue is political; in the South, it's personal.

* Like pussycats, though, it has to be on their terms -- they either like you, and will chase after you, or they don't and they won't. They don't strike me as the type that could be easily manipulated using standard Pickup Artist games, which are more for liberal women with abstract and rational minds, who lack the guidance of intuition and passion and could therefore fall prey to verbally persuasive word games. Southern women are more savvy: "She said, 'Don't feed me no lines and keep yo' hands to yo'self.' "