History of home prices and conspicuous consumption -- Another bubble ahead?

See the end of this post for a photo essay of the changes in home styles that accompanied the ups and downs in status-striving and inequality from the Gilded Age through today.

Starting with the historical data, here are American housing prices since 1890, according to the Case-Shiller index: 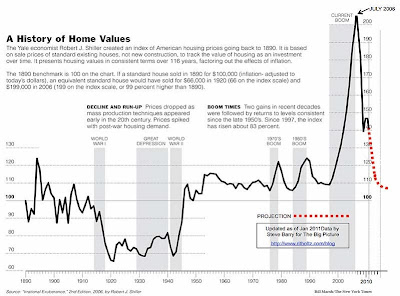 Notice that the Clinton-Bush bubble was not the only one in recent memory: there were regional bubbles during the late '70s / early '80s, and in the mid-to-late '80s. Disturbingly, each of the peaks appears to be getting higher, as do the troughs during crashes (the projected red line has not gone down that far yet).

Sidenote: it's worth remembering that status-striving is not limited to the elites, but strikes all layers of the class pyramid. Middle-class Americans these days would consider it an insult to their dignity to buy a functional living room couch typical of those from the 1970s, like this beige and brown plaid hide-a-bed. It has to be a sleek designer couch with microfiber upholstery, a pretentious name like "Parker" for the model, and the color described as "chocolate" or "espresso" rather than "dark brown."

Folks farther and farther down the class pyramid now view it as desirable to sit through college classes and collect a degree, no matter how little boost to income they'll get afterward. (They'll only wind up with huge student loan debt.) It's simply the status boost of having gone to college that matters. Anything less would be another affront to their dignity. Their counterparts in the '70s would have considered this a fool's game, and even given nasty looks to an uppity bigshot who went off to college just to get a feeling of upward mobility, while going nowhere (or maybe they would have just laughed at him instead).

Houses are no different. They are one of the most effective ways to signal that you are a somebody rather than a nobody, and their exteriors and interiors allow you to broadcast the amount of money you have access to (in practice, how much credit you are being allowed before sliding toward bankruptcy). Middle-class people in the '70s were content with a modest ranch house that was 20 to 30 years out of date. Now they demand something new, or new enough, more spacious, with two and a half bathrooms when one would do, and so on. If they're stuck with a house, they'll build additions, whereas their counterparts from 40 years ago wouldn't have felt they were missing out on so much.

Recall the history of intra-elite competition and inequality from Peter Turchin's review article here. When was the previous period of rising status competition and inequality? Roughly 1820 to 1920, though particularly from 1870 to 1920. And it appears that status competitions peaked and turned a corner before inequality did. The top layer no longer sought to propel itself higher and higher into the stratosphere, and the Progressive and Temperance movements sought to lift the bottom layers up from their descent into poverty and vice.

Fortunately, the Case-Shiller index goes back to 1890 (maybe a graduate student looking for a dissertation can extend it back further). And sure enough, there is a peak in the early 1900s before falling off a cliff during the '10s. America didn't get involved in WWI until 1917, and we only sent about 5% of our population away, so I don't see that playing much of a role in the decline that started early in that decade.

Moreover, housing prices did not bounce back during the Roaring Twenties, even though everyone thought they were rich. In fact they look indistinguishable from the prices of the Great Depression. Rather than the "health of the economy," this reflects the dampening down of status competition starting sometime during the 1910s and lasting through the Great Compression.

Shiller believes the jump during and after WWII is probably an effect of the Baby Boom increasing the demand for newer / bigger houses for larger families, and the GI Bill subsidizing home ownership. Sounds about right. Notice that it began declining after its late '50s peak through the '70s. So, the Great Compression saw declining or flat home prices, with a one-time exogenous shock upward in the middle of it.

If this analysis is on the right track, then we could be headed for another housing bubble -- the fourth one of the ongoing period of greater status competition. There are no other signs that status contests are fading out -- if anything, they keep intensifying every year. The higher ed bubble, pretentiously named and designed furniture, ever-changing cuisines that the fashionable must stay on top of, etc etc etc.

What worries me is that the troughs after the bubble keep rising slowly but steadily -- again, that red line in the graph is not reality. Home prices are still well above the last trough, and recovering (see the Wikipedia article on the Case-Shiller index for a graph). Plus the government keeps trying to re-inflate the bubble with a return to the easy ownership policies of the recent past.

It looks like the time between bubble peaks is about 10-15 years, so the next one wouldn't peak until the later part of this decade (knock on wood). The fact that there's an overall trend upward along with roller-coaster cycles doesn't mean there are two separate processes at work, one for the trend and the other for the cycles. It could just mean that the dynamic system is being attracted to a higher level, in an oscillatory or spiral fashion.

Dang, 2020 looks like it may show another heady housing bubble, an outbreak of political instability (riots, spree shootings, etc.), and a return to steadily rising crime rates. No wonder people are busy preparing for the zombie apocalypse!

Popular home styles from the Gilded Age to the Millennial Era

Before these past several decades, the last time there was such runaway conspicuous consumption and inequality was the Gilded Age and the Progressive Era. If you were desperate to signal your superior taste and standing in society, you wanted a Queen Anne home: 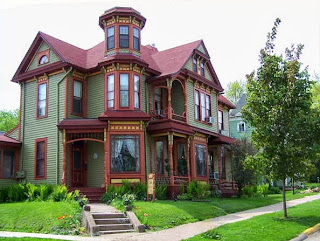 These things are pretty large by historical middle-class standards, had awkward bloated proportions, garish colors, and every style element thrown in but the kitchen sink. They don't look eclectic but slapdash. They've always looked like eyesores to me, as I don't award forgiveness points just because it's Historically Significant (TM). Someone at a City-Data forum had somewhat similar thoughts:

I suppose neighborhoods of flashy Queen Anne styles might have been just as odd to people who formerly were surrounded by simpler style homes in the Reconstruction era.


It won't surprise you to learn that they were commenting in a thread about the popularity of McMansions in our time, a latter-day Queen Anne movement, only this time with less color. Here is the most charitable picture I could find of them, not the even weirder looking ones from an exurban cul-de-sac: 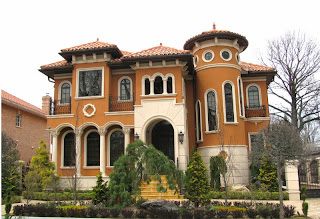 What about during the Great Compression? The most popular type of home during the 1910s and '20s was the bungalow. History books on domestic architecture refer to this period as "The Bungalow Craze." These homes are much simpler -- smaller footprint, rooms placed closer together, only one and a half stories high, human scale, and a more cohesive and not very fussy exterior. This being a rising-crime and outgoing period, they also had a taste for high contrast colors and rhythmic ornament, but not throwing everything together in a jumbled crust of detail. 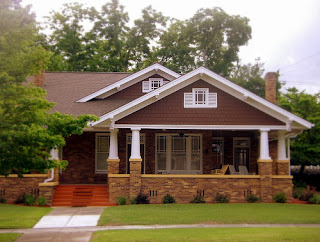 At the upper end of society, they would have bought somewhat larger and more stylish homes, though now they look handsome rather than garish. The proportions are more harmonious, they don't mix 50 different styles together, and the ornament is more subtle. As with the bungalow, the colors are usually high-contrast. The most popular style at the higher end was the Tudor home. If your suburban neighborhood feels pleasing to take a stroll through, it's because of homes built around the '20s. 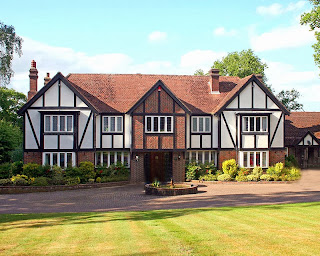 Once we get into the mid-century, the cocooning and falling-crime climate has made people prefer more drab colors, and not so much color contrast, as well as minimal or no ornamentation for its own sake. (The Gilded Age was a cocooning / falling-crime period as well, so we infer that their ornamentation was just for show, not because it lit up the pleasure centers of their brain.) It is also part of the shift away from conspicuous consumption, so there are two compounding forces that make mid-century houses look especially sparse.

Inequality had narrowed so much that there were no longer two clearly distinguishable styles of home, one for the working and middle class, and another for the upper layers, as there were with the bungalow and the Tudor at the outset of the Great Compression. Pretty much everybody bought a variation on the ranch house, even if those of wealthier owners might have two stories, a sunken living room, a larger concrete patio and swimming pool in the back yard, and so on. Here's one that looks like it was for an upper-middle class family:

Browse through this article from Fortune magazine in 1955 on "How top executives live," or at least look at the pictures. It not only provides a detailed snapshot of how spare and sober the very wealthy were living at the time, but traces the historical shift away from the ostentation of the Edwardian / Ragtime period of the early decades of the 20th century. In 1955, that was still in living memory for most top executives. I'll close with the relevant passage:

The executive's home today is likely to be unpretentious and relatively small--perhaps seven rooms and two and a half baths. (Servants are hard to come by and many a vice president's wife gets along with part-time help. So many have done so for so long, in fact, that they no longer complain much about it.) The executive who feels, as apparently Robert R. Young does, that to be completely happy he needs a forty-room "cottage" in Newport and a thirty-one-room oceanside villa in Palm Beach is a rare bird these days. The fact that Young paid only $38,000 for his Newport place, Fairholme, which cost Philadelphia banker John R. Drexel nearly a quarter of a million dollars to build in 1905, demonstrates the decline in the market for such outsize mansions.