Browsing through pictures of old cameras turned up this pseudo-selfie of Kristen Stewart: 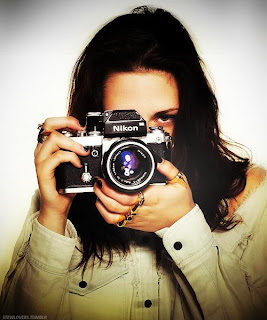 Unlike every other photo of hers, I responded well to this one. The blocky camera is hiding whatever typical mouth expression she's making -- the smug smirk, the unimpressed lip-press smile, or the "slackjaw = seductive" stare. A socially awkward girl like her can let her guard down and playfully engage us with her eyes, now that her face is protected by a comforting shield that doubles as a mock weapon pointed at the viewer. Operating the camera gives her hands something active and intentional to do, not hanging unimpressedly at her side, or mindlessly diddling her phone.

The prop is highly anachronistic for a Millennial to be using, but I only notice that at a conceptual and conscious level -- it doesn't feel out of place, and merely thrown in for name-dropping or quirky preening purposes. And not being a slave to fashionable state-of-the-art stuff makes her seem less fickle, airheaded, and self-advancing. She's showing acceptance of, and even an interest in, something cool from before her time.

Is this the coolest portrait ever shot? No, but that's an irrelevant standard. It has transformed a subject who is normally aloof, boring, and off-putting, all while feeling organic -- like maybe, deep down, there's a fun-loving young chick who's hiding and waiting to come out and play. Or maybe not. At least it allows us to imagine so, which is more than you can say these days for most portrait shots.

It's worth noting the differences from the typical selfies:

- No weird angle that would make it look predictably wacky.

- She's not looking away from the viewer and toward the camera / phone which is pointed at a mirror. Ignoring a viewer who is so up-close, only to stare at some damn device, is one of the most disrespectful ways to treat the audience. Just as bad if they're staring at themselves in the mirror, with the camera looking on.

- Even when they do look into the lens, it is while holding the camera at arm's length and pointing it backwards toward themselves. Our point-of-view in this case is of someone whose head is being held from behind or on the side, and manipulated by the subject to point and focus on Me Me Me. It all stems from the person's arm extending straight out into the place where the camera lies, where we imagine our head to be. It feels like we're a hapless pet dog whose head is being spun around by a bratty child demanding attention right now.

- The distance is not so far away that we feel like some bored passive observer of the subject taking a picture in front of their bathroom mirror. But it's not so close that we have that feeling of having our head held and manipulated by the hand and arm of the subject. We're in that unstable range where either we're going to move closer toward her, or her toward us. It sets up a little anticipation for a playful confrontation.

- The device is not something simple and mindless that she's using to escape or block out her social and physical surroundings.

- Hiding part of her face allows for some mystery. In a portrait where the subject has time to sink into a reflective mood, the subtle expressions that arise on her face might make us curious about what she's thinking and feeling. But when someone's taking a quick picture, there's usually not enough time for them to get into a truly pensive state of mind. Hiding part of the face is a quick-and-dirty way to inject a little mystery. The trick is to not make it feel forced, but if she's holding a blocky camera, then the partial occlusion of her face is well motivated. Unlike gimmicky crops, or holding your hand (or other object, e.g. a book or a pet) in front of your face for no reason.

We're going to be saturated with selfies for quite some time, so we had better think about how to make them pleasant guests rather than rude intruders into our daily visual culture. The techniques are not hard, it is only a matter of motivation. Shame the annoying majority, and tell the rule-breakers how pleasant they look.