I've been looking into the differences between cat people and dog people, trying to boil them down to the most basic causes. Some groups are more cat-loving than their counterparts, although there's typically enough overlap to require a more fine-grained look, a discussion of exceptions, and so on.

Well, not with the two groups we're going to look at first. I couldn't believe how totally separate they were.

Again, that'll take an extended series of comparisons to provide all the rich convincing detail, but for now we'll run a fairly controlled experiment. We want to make sure that the two groups we're comparing are very similar in most of the unimportant ways -- age, race, class, sex, etc. -- and we'd like for there to be a fairly honest signal of how cat-loving or dog-loving they are, not just asking them if they like one or the other.

The clothing retailers Urban Outfitters and American Apparel target the same demographic group -- young, white, educated, urban, liberal, more female than male. And they both have pet sections on their websites: here is UO's "pet shop," and here is AA's pets section. Presumably the selection reflects what the audience is into, or else they'd be losing money stocking the wrong stuff.

Every one of the 66 items at American Apparel are not only dog-related -- they are for the dogs themselves to wear. At Urban Outfitters, there's 1 item that is both cat and dog-themed, 2 that are neither, and of the remaining 60, 45 of them (or 75%) are cat-themed and 15 dog-themed. Only a few of the cat items are meant to be used by the cat (pet houses), while a good chunk of the dog items are meant for the dog itself (cape, bowtie, etc.). 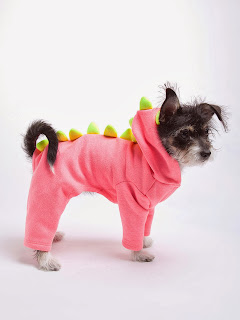 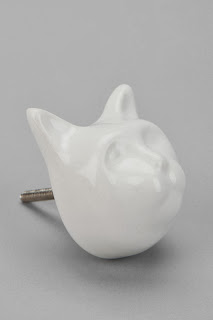 So, cat people do not treat their pets as pawns in a status contest played by the owner, while one of the primary motivations of dog people is to use their pet as a fashion accessory to broadcast the owner's lifestyle to their rivals in the status competition. It doesn't matter which arena they're battling it out in; that will only affect which choice of dog they bring along to duel it out with the other dog owners. E.g., pitbull for ghetto thugs, Pomeranian for childless yuppie women, and so on.

Cat-related merchandise is not foisted on the pet, but worn by the owner to signal the tribe they belong to (cat lovers). It is not part of a status contest because the t-shirt, sweater, etc., does not show the owner's specific cat -- like "Drop what you're doing, world, and look at my awesomely unique pet." It's either a generic cat or a well known cat, neither of which belong to the owner, and hence not one that the wearer is trying to show off or brag about in public.

Even though the two retailers cater to folks in the same demographic groups, there are other sets of striking differences between the typical shopper at each store. This tells us what types of people are likely to be single-mindedly dog-loving vs. mostly cat-loving.

Comparing the target audience at Urban Outfitters (first) and American Apparel (second), on the following dimensions, we find...

Lived-in vs. shining and new

Holds things sacred vs. whatever, get rid of it, it doesn't matter

No gym, no yoga, no jogging vs. owns array of specialized work-out gear

Guys: no manscaping, may have beard vs. trims pubes, shaves chest

Some of these themes will keep coming up, but they won't be so black-and-white. It's good to start with a rather extreme group comparison since that lays out the rough outlines, with finer details to be left filled in by more realistic comparisons.