Bombastic leaders in the lead-up to civil war: Kadyrov of Chechnya and Commodus of Rome

While looking into the link between the popularity of bloodsports and societal instability, I spent some time reviewing the history of the gladiator spectacle in Ancient Rome. Its popularity rose and fell along with the trend for internal political instability, over several cycles of ups and downs, convincing me that there was something real to the idea. Going over those various cycles will take some time to write up, so I haven't done that yet.

But one figure who struck me as worth discussing now was the Emperor Commodus, who ruled from 180 until he was assassinated in 192 AD. Historians generally regard his rule as the first break with the long period of internal peace that had begun with Augustus in 27 BC and lasted through the reign of Marcus Aurelius. During Commodus' reign, in-fighting among the elite began to rear its ugly head again, and the Emperor's personal conduct only added to the strife. Before long, the Pax Romana would unravel, plunging the Empire into a protracted period of state breakdown known as the Crisis of the Third Century.

You may recall that Commodus' predecessor, Marcus Aurelius, was an important Stoic philosopher in his own right, aside from ruling as the last of the Five Great Emperors. In fact, he was also the father of Commodus. And yet look at how self-aggrandizing the son would become as Emperor, appearing in the guise of Hercules for his statue, with a smug rather than heroic look on his face: 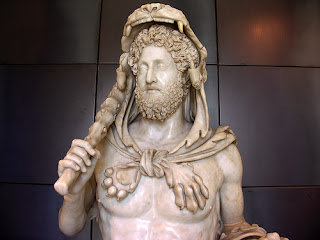 The Roman Emperor as Cosplay Hercules

In addition to parading around as a demigod, he relished in starring in the gladiatorial spectacle himself (from Wikipedia):

In November 192, Commodus held Plebian Games, in which he shot hundreds of animals with arrows and javelins every morning, and fought as a gladiator every afternoon, winning all the bouts. In December he announced his intention to inaugurate the year 193 as both consul and gladiator on 1 January. …

He thought of himself as the reincarnation of Hercules, frequently emulating the legendary hero's feats by appearing in the arena to fight a variety of wild animals. …

In the arena, Commodus always won since his opponents always submitted to the emperor. … For each appearance in the arena, he charged the city of Rome a million sesterces, straining the Roman economy.

Commodus raised the ire of many military officials in Rome for his Hercules persona in the arena. Often, wounded soldiers and amputees would be placed in the arena for Commodus to slay with a sword. Commodus's eccentric behaviour would not stop there. Citizens of Rome missing their feet through accident or illness were taken to the arena, where they were tethered together for Commodus to club to death while pretending they were giants. ...

Commodus was also known for fighting exotic animals in the arena, often to the horror of the Roman people. According to Gibbon, Commodus once killed 100 lions in a single day. Later, he decapitated a running ostrich with a specially designed dart and afterwards carried the bleeding head of the dead bird and his sword over to the section where the Senators sat and gesticulated as though they were next. Dio notes that the targeted senators actually found this more ridiculous than frightening, and chewed on laurel leaves to conceal their laughter. On another occasion, Commodus killed three elephants on the floor of the arena by himself. Finally, Commodus killed a giraffe, which was considered to be a strange and helpless beast.


It's not only lavish displays of conspicuous consumption that signal the intensifying competition among elites in the lead-up to political instability (a la Peter Turchin's structural-demographic model). It's also bombastic conduct on a personal level. Everybody starts walking around like they're a gift from God -- and like they all own the place.

Even if you're one of the few who does make it to the top, nobody likes a poor winner, and it's no surprise that Commodus as well as many of his successors were assassinated by (or on behalf of) their rivals. It's one thing for the failed aspiring elites to slam into the wall of reality that they do not own the place, but it's another to have their failures lorded over them by the winner, like Commodus gesticulating to the Senators that they were next.

Human beings are not like gorillas, where the alpha male can block out the lesser males with relative impunity. We are closer to chimpanzees, where dissatisfied males may team up to displace the incumbent coalition. This makes for much more politicking and internal group vs. group conflict, and potentially high turnover in who's running the show.

What were the conditions that allowed a megalomaniac dictator like Commodus to come to power in the first place? Quite simply, it was the Pax Romana. With so little pressure coming from outside the Empire, and with the internal peace having become taken for granted, the elites figure that the worst is behind them, and they can start grasping for an extra rung higher on the status ladder. So it'll lead to a little jockeying for status -- what could go wrong? It's just injecting a little healthy competition into our overly pacified society. It's not like we're going to be at each other's throats...

And yet as this in-fighting of elites drags on and on, that's exactly where the society winds up -- mired in civil war. Internal warfare is not a freak accident or act of God coming from who knows where, all of a sudden, and as a fluke. It is the culmination of a slow gradual build-up of pressure within an elite that is becoming increasingly bloated and cut-throat.

American elites today, despite all their in-fighting, have not resorted to making a name for themselves in the UFC or on Survivor. Still, in their 1998 gubernatorial election, Minnesotans elected a former WWF wrestler, Jesse "The Body" Ventura. And not to be outdone by a bunch of midwestern Puritans, the experimentalists of California responded in 2003 by electing the Terminator / Mr. Olympia as their governor (and re-electing him in 2006).

More in the style of Commodus, though, is the current strongman leader of Chechnya within the Russian Federation, Ramzan Kadyrov. I can't improve on Steve Sailer's review of his bombastic leadership style. Have a further look for yourself at this tumblr page. 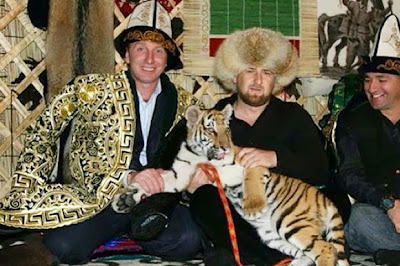 His rule has seen a surge in lavish spending by the local elites, including but not limited to Kadyrov's birthday party with Jean-Claude Van Damme hanging out next to him, and hosting a wedding on a giant floating party island in the middle of a river. He is also bringing luxurious hotels into the former region of simple living.

And of course all of this competition at the level of conspicuous consumption has been accompanied by targeting his rivals for status as Head Dude In Charge of Chechnya.

Again we ask ourselves, how in the world did somebody like this come to power? And just as before, we find that a period of external threat and outright warfare had prevented too much in-fighting among the Chechen elite. Namely, the Russification of the region after the Soviet Union had firmly established itself as a world power, and then the series of wars and other conflicts directed against rule-from-Moscow, as the Soviet Union began to weaken and ultimately collapse.

Here is a picture of Kadyrov and company from 1996, after his clan had fought on the separatist side in the First Chechen War against Russia. Notice how strikingly simple everyone is in dress and demeanor: 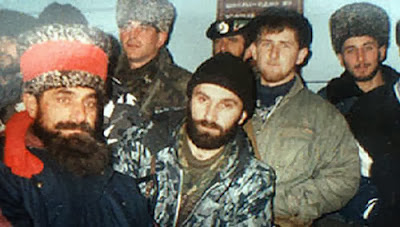 Extra actors from The Deer Hunter

After the Kadyrov clan switched sides to favor Russian rule in Chechnya, Moscow no longer posed a threat. Now in this period of receding warfare from outside, and with the new leadership still so early and fragile, the climate has shifted toward one of internal strife, spending contests, and bombastic conduct.

We may only expect this status jockeying, in the forms of luxury and violence both, to escalate in the coming years. It may not go on indefinitely -- if another separatist conflict erupts against Moscow, you can bet the Chechens will tone down their internecine politicking for awhile. The near future promises to be interesting indeed.