Queers are dog lovers -- What does it tell us about dog people?

Continuing the approach from yesterday's post about how to distill the essential differences between dog and cat people, we want to find a group that is so uniformly pro-dog or pro-cat, and that differs in only one crucial way from the comparison group.

If you live in a city, you probably have a hunch that homosexuals prefer dogs to cats. You see them out walking them all the time -- and not just Pomeranians that look and act gay themselves, but larger and less flamingly obvious ones too. A quick check of a question at Yahoo Answers provides several confirming answers from gays that they indeed far prefer dogs over cats.

Googling around turned up an excerpt from a queer lit novel Men Who Love Men (2008), which contains this pop sociology discussion, both establishing that gay men are feline-phobic and throwing out explanations as to why:

"It's like it's just not cool for a gay man to be into cats -- the way lesbians are, anyway, or the way most gay guys are into their dogs."

Jeff is starting to smile. "Well you know the faggot-canine connection is a long and honorable one. You see it on every street in every gay ghetto." ...

"Well," Jeff says, "it's easier to chat up a hunky blonde walking down Commercial Street if he's got a golden retriever with him." ...

"I know!" Luke says. "But when you ask gay men if they like cats, they invariably look at you a little funny, as if you'd just asked them if they liked drinks with little parasols in them or the music of Holly Near." ...

"Cats are considered girly," Luke continues. "Dogs are manly -- except poodles, but they don't count." ...

"You know," Luke says, ignoring me, "maybe that's why so many gay men claim to be allergic to cats."

"Have you noticed that, too?" Jeff asks. "There's got to be a correlation. None of my straight friends -- or my lesbian friends -- are allergic to cats. But gay men start sniveling as soon as you tell them there's a cat in the house." ...

"To me," Jeff says, "cats should be the gay men's pet of choice... Cats are what we as gay men aspire to be. Cool. Slightly mysterious, completely autonomous, perfectly groomed."

"You see, buddy, cats are tops, and most gay men are loath to advertise their bottomness walking down the street. With a dog, they can pretend to be master. But just let some faggot try to saddle up a cat and take him out for a trot. He'll quickly learn you can't use a cat to get the double takes or the chance to score."

NB: among each other, gays admit they are not cool, mysterious, and autonomous, but lame, obvious, and dependent.

Their kneejerk equation of cats with girliness, when cat ownership is about equal among men and women, is one of a broader set of perceptions of anything that shows a sex difference as girly and therefore disgusting (because in the gay Peter Pan mind, girls = cooties). Others include cologne, jewelry, and medium-length or long hair. Although they rationalize their revulsion as "ewww, girly," these things are part of the rite of passage of both males and females out of childhood and into puberty and adolescence. So, what they are truly repulsed by are things that signal the end of childhood and the beginning of courtship and mating -- with the opposite sex, naturally.

Does playing with cats fit in with that pattern? It sure does. Cats generally don't like small children. Yeah, occasionally they'll cuddle up with a baby, but usually they either tolerate the kid or try to avoid it. At such an immature age, the child doesn't know how to interact with a cat, which is not a babyish animal like the typical doggie. If he pets the cat too hard, the cat will get angry. If he pulls at his tail, the cat will get angry. He has to grow up and learn how to interact more subtly with other people and creatures before the cat will accept him.

My family and a number of my friends had cats growing up, but I don't remember them taking a liking to me until I was in middle school. Cats were like another set of grown-ups in the house -- cute ones, but cranky and strict about how to treat them. It was the same with my friends' cats, when not until 6th grade did I manage to earn the trust of one of them. Now I can befriend them on the street, where as a kid I certainly would have frightened them away.

Cats must be able to sense how infantilized faggots are -- it's not that hard -- and steer clear of them. "Oh god it's like a toddler, only bigger -- RUN!" Stinging from what they see as unfair rejection, gays then grow to distrust or hate cats. On the other hand, most all dog breeds show such indiscriminate affection toward people that gays don't have to worry about being rejected. The juvenile mind cannot tolerate conditional affection, such as those that characterize adolescent and adult relationships. It has to be unconditional, like a parent shows their baby.

Dogs are perfect at providing that, while cats treat you more like an equal friend, where one of you might not be in the mood to socialize when the other wants to, and that it's not the end of the world -- you'll simply try again later, and not blame them or hold a grudge in the meantime.

Googling and browsing around some autism support sites confirmed my hunch that cats do not make good pets for children with autism, not only because the cat is less tolerant of not-yet-mature creatures, but also because the autistic child often does not know how hard he's petting the cat, might throw it in frustration, and so on. Dogs were always said to make better pets for autistic children.

Both of these results tie back in to what I laid out in the first post, that one of the strongest differences between cat and dog people is that cat people are more empathetic and dog people more interested in things. Empathy and back-and-forth relationships among equals takes awhile to grow, so that suggests a related difference -- that cat people tend to be more emotionally savvy and developed. Dog people seem to have more difficulty reading another being's emotional state and interacting accordingly, although normal grown-up dog lovers don't behave bitterly and vindictively like the queer cat-haters do when they and the pet come to an impasse.

Projecting your own mindset onto the animal, rather than respecting its differences at a species and individual level, is part of what leads to the use of pets as status symbols, as outlined in the first post. (You also need a fashion-striving mindset, but of course homosexuals do.) A dog doesn't care about doing yoga, and doesn't understand what the writing on his doggie sweater says. But don't let that stop the owner from parading them around in this stuff. They need a servile animal to pull this off, and dogs are the ideal. Queers could definitely not dress up cats in rainbow-colored gay pride shirts like this:

Shameful, oblivious, patronizing, cruel... but in the dog owner's mind, if the pets themselves don't protest, they must be fine with it. That's the consequentialist view typical of liberals and rationalizers. The deontological view shared by cat people is that humiliation and exploitation is wrong no matter if the pet realizes or pipes up about how demeaning it is or not. You should respect the pet's dignity and honor, and not go there.

One time for yuks? Maybe you can bend the rules once in awhile, but not as the default. It'd be like sending your kid off to school with a gag scrawled in marker on his face, that he can't read himself. It's demeaning. As a rare practical joke, it's fine, but not every week or every day.

The consequentialist vs. deontological morality points to the final difference I noted before -- that cat people feel very strongly about respecting taboos, keeping pure what ought to be kept pure, and preserving the sacred. Gay dog lovers provide some of the most vivid evidence of what little regard they have for the most basic human taboos, such as against inter-species mating. I'll only subject you to one of a creepily huge number of gays in leather dog mask costumes, with or without a leash, with or without an owner/master, and with or without a fuller dog suit (including hooves that cover the hands). 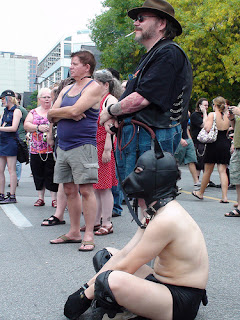 And don't forget this classic nightmare scene of decadence from the end of The Shining. 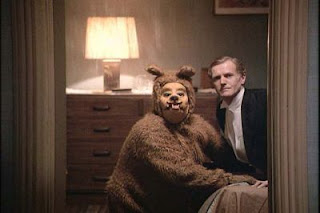 Why did they pick a dog/bear suit? Their intuition must have told them that truly depraved people don't dress up in cat suits, which is more for the garden variety sorority chick who wants maximum attention on Halloween without actually having to put out. That's one "Sexy ____" costume you don't see on Halloween -- Sexy Puppy. It would give off too much of a master-and-servant vibe, and everyone would be thinking, "That girl just ain't right."

I know there are those cat furry people out there, but I didn't find them searching Google Images for pictures of gays in weirdo animal outfits at the parades. It was almost entirely dogs (horseheaded men was another).

While gays are not the typical dog lover, they appear to be an extreme caricature of some central dog lovers' traits, and their case makes it easier to see what would otherwise require subtler examination. Dog lovers are less empathetic, more status or fashion-striving, and more permissive about violating taboos.

* For example, one time a group of girl dancers sat down at a table next to mine in Starbucks, and they had a gay bff with them. The girls began sharing stories about how their housemates had awkwardly walked in on them when they were making out or getting it on with their boyfriend. The queer immediately chimes in, as though his story is exactly like theirs, only his experience with it. Instead he goes through a lengthy description of some dude lying naked on the bed while he hunts around for some lube in the bathroom but can't find any, so he improvises with something I have blocked out of memory. Turns out this stuff burns the bottom's bottom like crazy, and the pair begin freaking out like the Two Stooges about how to put out the fire. Then.... complete silence from the girls, while he laughs along at the conclusion of his own story, totally unaware of how sick and from-another-world that kind of "awkward sex experience" is, how totally unlike what all of them had just shared.