Generation gaps in selfishness among bosses: Millennials worst, Gen X the least bad, Boomers in between

Via Paleo Retiree, here is an article about a report that I can't find online by the EY Group, showing that managers from the Millennial generation "are widely perceived as entitled, and score significantly lower as hard-working team players." It also says that "68 percent of that age cohort is perceived as 'entitled and concerned primarily about individual promotion,' " although it's not clear whether that means 68% of Millennial managers or Millennial workers in general.

Either way, sounds about right -- maybe a bit of an underestimate, if anything. They include anyone born in 1981 or after as a Millennial, so those early '80s births are making the whole group look a little better. If you restrict it to true Millennials, the numbers for selfishness would look even worse -- more like 80% or more being entitled and self-focused. *

How do they compare with other generations?

The next older cohort, Gen X, ages 33 to 48, were perceived as the strongest managers by 70 percent of survey respondents, Twaronite said.
"That's even more than boomers," she said. "Only 5 percent said Gen Y was prepared to lead."


No surprise that older and more experienced managers are perceived more favorably than younger and greener ones. But if that were all there was to the story, then Boomers should be rated even higher than X-ers -- yet they weren't. And the Millennials shouldn't be scoring that low due to lack of experience alone. These are enduring generational differences that do not go away with age.

In fact, if you look at what Gen X managers were like back when they were the same age as Millennial managers are today, you'd find much friendlier and more competent bosses. When Starbucks and other coffee shops began exploding in the '90s, those 25 year-old managers weren't naked self-promoters, showed basic respect for the workers, and still knew enough to make sure that shit got done around the workplace. Otherwise none of those companies would have taken off as successfully as they did during the booming Nineties.

You know, Generation X caught a lot of shit back then for their slacker attitude, but I think that was mostly a phase they were going through in the early '90s, maybe petering out into the mid-'90s. After that, the slacker thing was done. It was a combination of the early '90s recession, plus having to shift gears from the fun-loving zeitgeist of the '60s through the '80s, and now into the cocooning and sarcastic Millennial era.

In fact, maybe a little dose of the slacker attitude when you're young makes you more humble and likely to take the larger picture into account when you're older. The workplace was made for man, and not man for the workplace. That sentiment may dampen down in intensity now that you're not 19 years old anymore, but the basic guiding principle continues to steer your economic behavior. Taylorism must be lowest among Gen X bosses.

And before the early '90s grunge influence, there was an even longer and stronger influence of the '70s and '80s on Gen X, when they were children and adolescents. Every other high school kid used to have a job back in those days, and not a very glamorous one either, nor one with high potential for career advancement. Try taking orders at the pizza parlor. Or changing the oil at the local car garage.

Those kind of shit jobs build character, though -- they're like boot camp, breaking you down so that you can be built up afterward. If you coast through childhood and adolescence without ever working for real, and then go after an internship or whatever during college, you're trying to skip over the whole introductory stage of working with others and working for others.

Moreover, you won't have an empathetic connection with any workers you may be in charge of later on -- you got to bypass all of the miserable crap that they're going through. "And I mean, they're being paid, aren't they? So why are they complaining?" The Gen X manager who, whether consciously or viscerally, remembers his first couple of bullshit jobs is going to be more understanding and respectful of his workers, where the Millennial boss would not get it and act rude.

Aside from their economic experiences, there was just a broader culture of informality, looking out for each other, and playing down your own egocentrism in order for the group to really come alive and have fun. Whether that was attending church services or hanging out with your buddies. Social interactions were not so formally regulated and micro-managed as they had been in the Fifties (or as they have returned to being these days). And when you're developing in a world that stresses informality, you're guided more toward an ethic of camaraderie rather than authority.

These formative factors on Gen X also applied to the Boomers, particularly the later ones, but not quite to the same extent because they might also have grown up during the '50s or even the '60s when the society was only beginning to make the turn toward informality that peaked in the '80s.

What about that mini generation born in the early '80s? Well, when I was just out of 4th grade, my best friend and I took up a door-to-door sales job offering the service of spray-painting a house's address on the curb to make it more visible (that was a thing back then). It kept us pretty busy that summer. In 5th grade, I helped my dad out with his comic book selling business. And in 6th grade, my best friend roped me into helping him with his arduous paper route, splitting his paycheck with me. And so on afterward -- but it all got started pretty early. I know I'm not alone in my cohort, since two of those three cases involved my friends.

Interestingly, my mini generation kept working as teenagers about at the rate that Gen X did, even though it was now the second half of the '90s and the society was well into the cocooning phase. It's only with Millennials that teenagers stopped working. Here are two graphs showing employment of 16-19 year-olds from the late '70s through today: 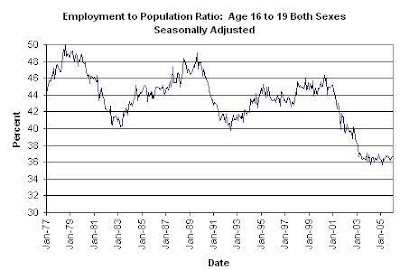 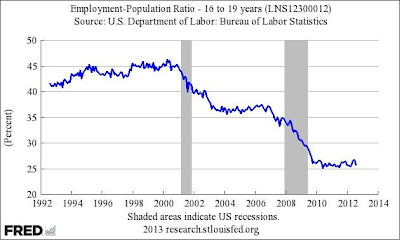 There are dips during recessions, and upticks during recoveries, but basically no pronounced long-term change from the late '70s through the late '90s. The peaks go from 49% to 48% to 46%. However, when the next peak occurs with Millennials during the mid-2000s bubble, it's only about 36%, and during the current "recovery" it's only ticking up toward 26%. Damn kids just don't want to work like they used to. And again there is a huge chasm between those born in the first and second half of the '80s.

How did early '80s births escape the cocooning trend of the '90s, and find work about as successfully as Gen X did back in the '70s and '80s? I think it's because our parents based their parenting strategy around the time we were born, and kept it frozen in place for the rest of our lives. Otherwise they would've begun to helicopter parent us in the '90s and 2000s, but I never really smelled that personally or from anyone else I knew. Our parents didn't hound us on the phone once we left for college, unlike the smothering psycho parents of Millennials -- always asking where they are, where they're going, and "just touching base."

In matters that were more up to us alone, we did start to show signs of cocooning, like the declining interest of teenagers in getting a driver's license since circa 1990. But when it comes to work, that's something that isn't totally up to you -- your parents have a strong say in pushing you to start earning rather than keep hitting them up for money. And again, parents of teenagers in the late '90s had formed their parenting strategies back in the early-mid-'80s, when autonomy and character were more important.

If only the Millennials were out and about doing something interesting, fun, and furthering their growth and development, then I might give them a pass about not working so much as teenagers. But when all they do is sit around listlessly scrolling through pointless text messages, joylessly swiping a screen, and getting more touchy-feely with their keyboard than with their peers, I can't cut them some slack.

It's not just the disgusting sight of it all, here and now, but seeing where it's leading them as they age (not mature). Some of them are 25, 26, 27 years old and still have zero experience being healthy and normal. I feel sorry for how much their parents sealed them off from all non-nuclear family contact growing up, and stunting their maturation.

But after they're out of the house (big if, perhaps), they ought to celebrate their freedom and start trying to make up for lost time, whether that will fully make up for their sheltering before age 22 or not. At least try. And yet you continue to see few signs of them stirring awake, fighting for something, or being driven toward anything other than a more padded cocoon and pure self-promotion. It's not just their helicopter parents who are to blame for how they're turning out well into chronological adulthood.

Ever since I started ranting about this Millennial generation, I made it clear that you ought to care, too, since they're going to be rising up the ranks in all sectors of society pretty soon. And that article confirms that -- way more of them are assuming new managerial responsibilities than are older generations. Welcome to the new brat-ocratic workplace.

And of course, their poisonous influence extends far beyond the economy. Any other social or community setting is going to start taking it good and hard with the Boomers phasing out and the Millennials phasing in. And the tireless Gen X-ers holding up the fort there, too, man.

If you look at where in the zeitgeist cycle the X-ers were born, they're the reincarnation of the Greatest Generation. Now, we imagine them being given that honor because of WWII, but that must have been just the icing on the cake. They would've been remembered that way even if we hadn't gotten involved in the war. It used to sound strange, but perhaps it's making more sense -- that posterity will look back on Gen X the way that we do on the Greatest Gen. Stranger things have happened before in the history of history...

Mini bridge generations like that form when a cohort goes through puberty during a shift in direction of the social-cultural zeitgeist. Their formative childhood years pull them in one direction, while their formative adolescent years pull in an opposite direction. Folks born in the early '20s or early '80s grew up with outgoing childhoods, but saw the first stages toward cocooning as they entered adolescence. It gives the generation a split personality -- some people are definitely toward the earlier norm, some people definitely toward the later norm, with some people fluctuating from one norm to the other in phases.

You also get the mirror image, folks who were going through puberty circa 1960. Their childhoods pull them in the sheltered, pampered, and naive world promoted by Dr. Spock, while their adolescence unfolded as the society was moving in a more free-wheeling and hard-nosed direction. Those Boomers born in the late '40s bear the stamps of this dual inheritance.