A recurring topic around here is how incapable folks these days are of expressing simple basic emotions, resulting in grotesque caricatures when they try to make any face other than that of an iPhone zombie. (See here and here.)

This broken system of expression is particularly strong among Millennials. Boomers and X-ers know how to and have had plenty of practice with showing genuine smiles back in the good old days. So when they make their weirdo face -- albeit not very frequently -- it's more like they're hiding who they really are, because you're not allowed to be yourself anymore in these stuffy, snarky times we live in.

The experience of Millennials, however, has only been with the sarcastic, glib, avoidant, and dismissive period of the past 20 or so years. They're not the pretty girl who makes herself look drab in order to avoid the inevitable assaults of beauty-hating bow-wows. They're the doughy, pizza-faced slug who slathers on juggalo make-up in order to suggest that "I can look pretty, I just don't want to." Get real, you skag.

In a new interview with Rolling Stone, pop star and suspected faggot-trapped-in-a-chick's-body Miley Cyrus explains why she always sticks her tongue out and dials the facial fakeness up to 11 when she's having her picture taken:

"I just stick my tongue out because I hate smiling in pictures. It's so awkward. It looks so cheesy."

The key word there being "awkward" -- expressing basic emotions is awkward, presenting an attentive and affectionate face for your fans is awkward, and trying to make yourself likable is awkward. Young people today are pretty fucking awkward. And yet, does warping your face into a kabuki mask make you look more normal, cheerful, and not-cheesy? Nope. Check out a gallery of this freak sticking her tongue out for the camera.

So there you have it, straight from the horse's mouth. Millennials themselves realize that they aren't taking duckface pictures, staring down at their phones, etc., because it's cool, comforting, fun, or whatever. They're aware that they're just too damn sheltered and awkward to know how to behave around people who don't come from their nuclear family.

Miley Cyrus represents the more antagonistic subset of emotional retards. But her less hostile peers like Selena Gomez, Nicki Minaj, and Kesha aren't any more developed. When they attempt a smile, it still looks smug or strained -- and irritated that you're causing them strain by expecting a normal smile.

Here's something you don't see much of nowadays. So cute and wholesome: 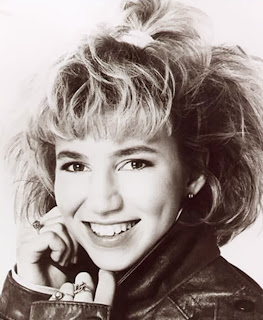 That looks like it's from 1987 or '88, when Debbie Gibson was only 17, yet looking more mature than bratty Millennials in their mid 20s today. Only when helicopter parents began to prevent their children from socializing with their peers did young people become incapable of even feeling basic human emotions, let alone express them to others. Helicopter parents have no one to blame but themselves for producing a generation of Lady Gaga's and Miley Cyruses.

If they want more Debbie Gibsons and Tiffanys, they're going to have to let their kids have their own (i.e. unsupervised) social life. That's what pushes a person to grow up -- having to fit into a group, leaving behind childish egocentrism.

And it's not just the "bright bubbly smile" look that young people used to be capable of. Check out the music video for "Foolish Beat" and note how effortlessly grown-up she looks and acts. Not one of those '80s hall of fame songs, in my book, but focus on how she presents herself. No caricature or irony back then to provide the lazy / retarded way out.